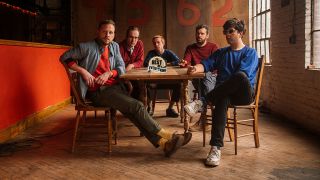 Drummers. They’re always getting a bad rap, aren’t they? The perennial butt of rock’n’roll jokes, if they’re not getting the piss ripped outta ‘em, they’re getting straight up ignored – even though we all know its the tightly-honed tub bashing of a qualified sticksperson which can make or break a song.

Well, Dr Dog drummer Eric Slick has had enough. Fresh from laying down the sweet grooves on the Philadelphian indie rockers’ brand new Critical Equation album, Slick is on a mission to grant his favourite drum grooves – and the genius minds behind them – the dues they’ve long deserved. With a 1, a 2, a 1, 2, 3, 4…

“Steve Gadd’s elusive and slinky groove for this 1975 classic Paul Simon track proves that linear drumming can be musical. It’s also insanely hard to play. I like to soundcheck with this one early in the morning to confuse audio engineers around the globe.”

“If you haven’t heard of Zigaboo Modeliste, drop everything right now and get thee to a YouTube. Cissy Strut is one of the hardest grooves to play along to. Deceptively impossible. I’ve pored over Stanton Moore’s transcription of this tune, and I’ve had the great joy of watching Zigaboo play it live. It still doesn’t make sense to me.”

“The legendary James Gadson is the drummer on this one. I’ll never forget the first time I watched James Gadson on The Old Grey Whistle Test, with his soft touch and incredible pocket. The kicker on the ‘Use Me’ beat is the open hi-hat on the “e” of the sixteenth-note grouping. If you’re not a drummer, that means nothing. If you’re a music enthusiast, just sit back and enjoy that deep pocket.”

“My drum teacher tried to show me this Mike Clark beat when I was 11 years old. What was he thinking? This is about as fast as I can play these days. This is another sticky, linear groove. Mike Clark is a weird drummer – a loft jazzer playing hard funk on a tightly-tuned kit. His early drum and bass groove propels (ahem, thrusts) this fusion classic into the stratosphere for me.”

5) Michael Jackson - Rock With You

“The intro to this song (expertly played by drummer JR Robinson) is one of the more musical and technically challenging intros in drumming history. It’s so popular that the sheet music transcription is engraved on a Paiste ride cymbal. I’m unsure if JR is playing the hi-hat with two hands on this track, so if he’s not, he has the fastest right hand in pop drumming history.”

“Where is the 1 on this track? I feel like Dave Grohl flipped the beat and didn’t tell anyone. Is it metric modulation? What’s happening? It’s the mystery of this song that brings me back to it. The kick drum sounds like it was recorded in a gymnasium. It makes me want to get into the pit, like every great groove.”

“Steven Drozd is a genius. We all know this, right? He probably played everything and the drums on this track. I remember hearing it and thinking it was a programmed drum machine beat. It’s perfect for this song, and I can’t imagine the song without it.”

“I’m trying to find a drum that sounds like Ringo’s Ludwig Festival snare on this track. Ringo is known for wonky, over-the-barline slosh…but his playing on this song is downright frightening in its precision. I don’t know anyone who can accurately play the beat to this one. Simple and refined.”

“Bernard Purdie is the best drummer of all time. You can fight me on this. He’s so ubiquitous and yet people don’t give him the respect he deserves. He’s so good that he has his own signature groove. His name is the groove. It transcends the music. You can hear it on Home At Last and Babylon Sisters by Steely Dan. You can hear John Bonham ripping it off on Led Zeppelin’s Fool In The Rain. There’s no one else who can claim The Purdie Shuffle, except for Bernard Purdie. It’s the greatest groove of all time.”

Dr Dog’s new album, Critical Equation, is out on April 27th via We Buy Gold Records/Thirty Tigers. Check out a preview of new song Listening In below: