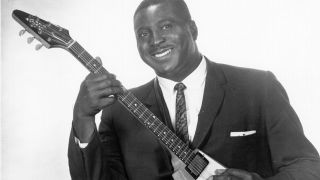 With their Black To Blues EP released this week, the blues are clearly on Black Stone Cherry’s mind. Yesterday guitarist Ben Wells picked his five favourite songs by the great Howlin’ Wolf, and today bassist Jon Lawhon has selected five tracks by Albert “the Velvet Bulldozer” King, the man behind the timeless Born Under A Bad Sign.

Born Under A Bad Sign was a hit for King in 1967, and has since been covered by the likes of Blue Cheer, Paul Butterfield, Jimi Hendrix, Etta James, Paul Rodgers and Rita Coolidge. It also features on BSC’s new EP, which celebrates the 60’s electric blues scene with covers of songs by King and others.

What a voice and guitar player! Albert King was such an amazing artist. Ever since we were all kids we’ve been listening to blues, and the knowledge and experience passed to us by our families and the Kentucky Headhunters would not have been the same without the influence of Albert King. Truly one of the three kings of the blues. His voice was so unique to me because it sounded smooth and clear. That voice is one of the main reasons he always stuck out to me. It definitely separated him from the rest.

One of my all time favourite blues tracks ever. The vibe on this song just feels so heavy. It leans into an electric Delta blues sense which speaks loudly to me. The groove is undoubtedly one of the coolest ever recorded, and I was so glad we decided to cut it for our EP.

While most of the world would, more than likely, recognise another King’s version of this track, Albert absolutely astounds you as the listener. It doesn’t matter if you’re the worlds biggest Elvis fan — like my brother and bandmate Ben — you have to admit this one is over-the-top good!

Vibe. The second the song starts you’re immersed in Albert Kings tasteful guitar playing. Then when you think it can’t get any better, you hear his sultry voice command your attention. This is a stellar cover originally done by Tommy McClennan. Tommy was a Delta bluesman, and hearing Albert’s version makes you appreciate his feel and the way he really owns it. The swing just feels great.

I love this song. It’s almost hilarious to listen to the lyrics. Every musician can identify though. Haha. Personally, I can relate to the the line about the woman with cold feet because my wife tortures me every night! Aside from that, my favourite verse in this song is:

That’s the Black Stone Cherry mentality through and through. The last part sounds like a lyric we would write. It’s almost like Albert wrote it about us!

Now, of all the blues songs on earth, this one has to be the quintessential electric blues song. Albert at his best. The guitar work is extraordinary, and lyrically it maps out the working man’s life to a T. We’ve all been in that spot where it feels like finding a way to get your head above water is just simply impossible, and every wall around you is either closing in or falling down. Music like this is what we did to fight depression at one point in history. I feel like today it still rings true. It helps to hear someone else’s problems and to know you aren’t alone.