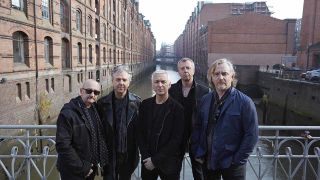 Luke Morley is unwell. For as many years as singer Danny Bowes can remember, Thunder’s guitarist and songwriter won’t be joining the band today as they run through a short acoustic set to promote their latest album, Rip It Up, at the HMV store in Cardiff. And while flu has done for a hacking, rheumy-eyed Morley, the rest of Thunder are in rude health.

The band most likely to; written off; broken down; reunited. Thunder have been all things to all people for the better part of 27 years. Two years ago they achieved something of a fait accompli with their commercially and critically acclaimed album Wonder Days. It was the familiar Thunder blueprint writ large: rousing, larger-than-life good times that were occasionally tempered by rueful reminiscing and the thrum of an acoustic guitar. It’s not to belittle Thunder to say they were doing what they do best.

Its release followed a trying period when Bowes had quit the band, they’d reunited to tour with Journey and Whitesnake (and walked away as the best band on the bill on more than one night), and then struggled to reconnect as guitarist Ben Matthews underwent treatment for cancer. Things happened in fits and starts. There were introspective conversations about how and why the band had ended, and how they could begin again and do things better this time. Remarkable, really, that Wonder Days ever got made at all.

“When we came back and made Wonder Days we carried on where we left off,” Bowes says. He’s seated in his hotel room overlooking Cardiff’s Queen’s Street. “We just tried a few things with that album, some musical stuff. Luckily for us they all worked. Not that I’m sure anyone noticed. It was a comeback record, so we really wanted to make sure that everyone knew what we were about. It was obvious there was a lot of love for what we were doing, so that gave us the confidence to go that little bit further with the performances and the sheer musicality with this one.”

You’d be hard-pressed to find a more stoic frontman in rock’n’roll than Danny Bowes. Never knowingly nonplussed by the semantics of business, completely level-headed about what it takes to make the day-to-day work with a band at Thunder’s level, but – and this is perhaps the most important bit – completely committed to helping Thunder become the best band they can possibly be. When he left them – surprising Thunder and their fans – at the start of 2009, he had, by his own admission, run himself into the ground.

“I very much pulled the rug out from under everyone’s feet when I said I wanted to stop doing it,” he says. “I’d been running the band’s label for six or seven years, we had great communication with the fans, but the problem is that it’s too much work when you release five albums and a lot of live DVDs and have an online store when it’s doing its thing… you’re running around at full tilt all the time.

“So I was completely fried. I had nothing left. And I said to the other guys in the band: ‘If I don’t stop, I’m going to have a heart attack or a nervous breakdown or both.’ And then at that point I was offered an opportunity to become an agent. And that seemed like a very attractive proposition: regular hours, regular money, it wouldn’t be eighteen hours a day, every day of the week.”

Being an agent lasted two years, managing bands a few years more. But the pull of Thunder was too much. The tour with Journey and Whitesnake in the spring of 2013 led to more offers and 25 shows that year: “That’s a lot of gigs for a band who are supposed to have broken up. It’s a bit ludicrous”, says Bowes.

For the Wonder Days album, they tried something new: recording incrementally in three distinct, extended sessions in the residential Rockfield Studios in the leafy Welsh countryside. It worked so well that they decided to repeat the formula for Rip It Up. They also decided that with this album it was time to try something new.

“In the past you go in and write fifteen or twenty songs, record the best ones, come out six weeks later and it’s all done,” says Bowes. “So I think those three separate recording sessions – and he would probably never admit this in a million years – gave Luke, subconsciously maybe, the ability to say to himself: ‘Where’s this idea going? I’ve got something like this already, best investigate this.’ So it gives you a little more movement to reject material.”

Space to reflect, time outside the studio, familiarity (“Rockfield is a return to the comfort zone, very conducive to getting a lot done”) and the desire to push Thunder in a more sophisticated and newer direction all played their part in the making of Rip It Up.

A first listen would not surprise any long-standing Thunder fan. It’s an album that gives up its secrets slowly. There’s more piano, groove, understatement, space, nuance, light and shade. There’s a moment of vocal interplay in the title track that echoes the Beach Boys at their golden best, if Brian Wilson had come from Lewisham. It’s the sound of a band pushing themselves further than they ever have before.

“It is,” says Bowes. “This album was harder than the last album for me, and I think it was harder for all of us in various ways. We decided to set the bar higher – we didn’t want to make another comeback album, we wanted to explore our musicality. Luke wanted to go a bit further with the songwriting, and we actively encouraged him to push it as hard as possible.

“There’s a song on there called Right From The Start, which is this classic Thunder ballad thing. But but when I heard it it was the first time in my life that I thought: ‘I genuinely don’t know if I can sing this song.’ And when I spoke to Luke about it, he said I could do it, but that I just had to look for places in my voice that maybe I haven’t heard or used before. That was hard . That song took me twice as long to sing as any other song on any of our other albums.

“I’ve never really thought of myself as being overly musical,” he continues, “but I have always wondered if my voice would do other things. And it’s really great to get an opportunity to try it. When Luke brings you tunes and you start to think: ‘Blimey, perhaps this might be a leap too far,’ it puts you in a different place, and you’re not feeling completely confident about it in the same way, but that’s good for you.”

But Bowes wasn’t the only one feeling the pressure once they’d settled into the studio.

“There’s a solo Luke plays on the opening track, [No One Gets Out Alive], and I can remember watching him play the solo through the glass. And it was like he had Tourette’s – he was swearing at his guitar all the way through. At the end of it I said: ‘What’s that about?’ And he said his fingers weren’t doing exactly what his head was telling them to do. And this was the man who wrote the song!

“So we were all learning new things. We learnt to hold back on this record. Look at a song like In Another Life – you just sink into that groove. That’s what the song is all about.

“There’s a confidence that comes with age, with being together this long. I think it was Eric Clapton or Dave Gilmour who said it’s not necessarily the notes you play, sometimes it’s the gaps. I think we’ve been learning that over the years, and on this album that’s more evident than ever.”

Danny Bowes tells a story that goes like this. At one of the band’s infamous annual Christmas knees-up shows, they would indulge themselves as much as the audience who came to see them. At the end of the gig, the fans would get a CD of that night’s show as a memento of the evening and as a thank you for their support.

“We used to get pretty hammered during the course of that show, and it turned into kind of a thing,” says Bowes. “And when I listened to those CDs afterwards, I thought to myself: ‘These are actually starting to sound a bit drunk now – this is wrong.’ These are all sorts of time-stamps, really – it’s what people are going to judge us by later on. People who weren’t there are going to hear these things. So you start thinking about that.

“And I think it’s to do with the march of time, too. You start thinking: ‘What if we’re running out of time to make our best record? Maybe it’s still in us? And if we don’t apply ourselves and search for it, maybe we won’t make it. And if that is the case, then why are we bothering?’

“I suppose these are all the questions you begin to ask when you become very aware that maybe you’ve got more days behind you than you have in front of you. Things start to become more important. And when you put that against everything else that we’ve been through, I think it’s a recipe for a little bit more attention: let’s not just let it go, if we need to have a row about it then let’s have one; we need to get this sorted out and it needs to be better.”

Rewind to 2016. It’s dusk, and the sun is disappearing over the Welsh countryside outside the window that overlooks the old outbuildings that surround Rockfield’s main studio. It’s the third and final session for Rip It Up and the album is as good as done. Luke Morley and Danny Bowes are slumped on the sofa, listening back to the mixes of the tracks. They both look exhausted, like they’ve been put through the wringer. They clink beer bottles and settle back to take it all in.

“I remember that moment vividly,” Bowes says today. “Just being in the studio at the very end on our last night, and Luke said: ‘I think it’s worked.’ And I think we’d all had a bit of a hard time on this record, and we both thought that was great, in a way; that it had paid off even though we’d had to pay for it.” He smiles. “And not just in money.”

Rip It Up is out now via earMUSIC.

Thunder - Rip It Up album review

The 11 best songs by Free, according to Thunder's Luke Morley