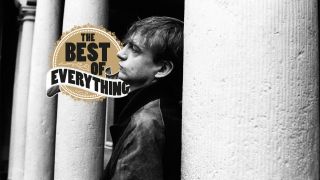 Let’s begin in a deliberately Mark E. Smith truculent and obstinate fashion by disregarding the two cover singles that The Fall released during their “successful” 80s pop era.

Despite their own composition Free Range just making it to number 40 in 1992, those covers remain the band’s only chart hits to date: R. Dean Taylor’s Motown single remade as an indie-goth anthem, There’s A Ghost In My House (written by Holland, Dozier and Holland, originally released 1966), and their belligerent re-working of The Kinks’ 1969 hit Victoria. They charted at 30 in 1987 and at 35 in 1988 respectively for Mark E. Smith and colleagues. No such dizzy altitudes of commercial success have been reached since, despite the popularity and ubiquity of latter-day Fall-composed favourites like Touch Sensitive and Theme From Sparta FC.

The Fall have recorded a myriad of fantastical and surprising cover versions over their fast-approaching 40-year career. Influenced by a broader spectrum of rock than many of the bands you’ll read about on this very website, the first ever record Mark E. Smith bought at the age of 13 was Black Sabbath’s Paranoid. Since that musical awakening, the tastes of the sole continual member of The Fall have travelled far and wide – as his choice of cover versions suggests. Taking in everything that’s inspired and influenced MES from country, rockabilly and garage grooves, to forgotten psychedelia obscurities, it’s a treasure trove of bloody-minded experimental reinvention from Prestwich’s lords of rudimentary rock ‘n’ repetition. We only have these excerpts…

STRANGE TOWN (Groundhogs, 1970) An absolutely fucking shambolic (but in a good way) treatment of a story about alienation by Tony McPhee’s revered British blues rock outfit. Evidently recorded just once in one take for the album Imperial Wax Solvent, it clatters to a premature halt at 2:43 with Smith’s slurred yelping collapsing into giggles. It’s possible he may have drank a glass of shandy prior to recording. Our favourite bit is at the start: what sounds like a sinister impersonation of Arnold Schwarzenegger doing that shithouse USA tourism ad.

ROLLIN’ DANY (Gene Vincent, 1958) Loves a bit of rockabilly, does rockin’ ted Mark E. Smith (also see the northern sociopathbilly of classic early Fall track The Container Drivers). Quite appropriately – considering the refrain “Everybody’s talkin’ about workin’ Danny/No-one’s talkin’ about rollin’ Danny” – this tale of a freewheelin’ ladykiller was a double-A side with the anti-work/commute drudgery sentiment of Couldn’t Get Ahead. Recorded in 1985, the single was produced by John Leckie at the very height of his career. It was all downhill for Leckie afterwards; he went on to work with the Stone Roses, The Verve and Radiohead. Whoever they were.

WHITE LIGHTNING (The Big Bopper, 1959) A quality cover, one of their best. It’s Fall-erised with their familiar taut industro-clank to such a degree, you could almost forgive any young shavers for mistaking the anecdotal hillbilly story about wily ol’ papa’s illicit moonshine distillery as The Fall’s own composition. Interestingly, The Big Bopper sings “white lightning-ah!” in the original. No doubt where Smith sourced his parlance.

LOST IN MUSIC (Sister Sledge, 1979) The Fall never follow current music trends. MES and former long-serving bassist Steve Hanley wrote the vitriolic Idiot Joy Showland about the short-lived late-80s indie/dance ‘Madchester’ trend that centred around iconic Manchester club The Hacienda. But that’s not to say they’re music snobs: from the krautrock tribute of I Am Damo Suzuki to the techno of Hit The North and dance anthem Touch Sensitive, covering Ver Sledge might look like a pisstake if the Happy Mondays or Inspiral Carpets tried it. But The Fall pull it off by turning the wedding disco standard into an avant-psyche masterpiece. Whaddaya mean not really a “rock” cover? Course it is. Shut up. Fine then, we’ll do an extra one.

I CAN HEAR THE GRASS GROW (The Move, 1967) Mark E. Smith was only 10 years old at the height of the late ‘60s psychedelic era, but he’s always been a big fan of the genre. “Roy Wood was a genius, always has been for me,” he said of The Move singer/guitarist and songwriter. Roy Wood is probably most widely known for the festive wince-fest I Wish It Could Be Christmas Everyday, despite the many psyche-pop and rock classics he wrote with The Move, ELO and Wizzard.

MR. PHARMACIST (The Other Half, 1966) Another stone-cold classic cover, originally written by LA’s late-60s hard rock psychedelia-era also-rans The Other Half. One of The Fall’s most accomplished, it was released in 1986 as a single that topped out at number 75 immediately prior to the hit of There’s A Ghost In My House. This was also one of their earliest videos. Utterly bewildering, as if a German Expressionist film had been commissioned for CBeebies, MES stands in a traffic contraflow, sprechgesangs into a loudhailer then chases around someone dressed in canary yellow, painted with blue polkadots. It makes the promo for Eat Y’Self Fitter look like it was directed by Martin Scorsese. Like There’s A Ghost In My House, Mr. Pharmacist features one of many of the band’s classic line-ups with that trademark Fall mechanical rumble. Frantic furniture-splintering punk rock middle eight too.

THE LEGEND OF XANADU (Dave Dee, Dozy, Beaky, Mick & Tich, 1968) Yeah. The Fucking Legend Of Xanadu, pal. Got a problem with that? As you can imagine MES informing a dumbfounded band member of their latest cover version project. Something of a phoned-in effort, MES pronounces at the start that “you cannot legislate against wrongful encouragement”. Which suggests he might prefer to have been at home listening to Can than taking part in recording an exclusive track for a various artists covers compilation album to mark the 40th anniversary of the NME. Maybe he was sore about missing out on covering Willie Dixon’s Little Red Rooster. Which, on the same album, The Jesus And Mary Chain ruined for everyone.

WALK LIKE A MAN (The Four Seasons, 1963) The Fall haven’t recorded this, but it’s been a live favourite for a while now. Here is Mark E Smith performing it – somewhat ironically – whilst seated on stage after a broken hip incident. As if Frankie Valli had been forced to do a gig after being spiked with ketamine.

WHITE LINE FEVER (Merle Haggard, 1969) Not to be confused with the Motörhead song which has the same title but is about an entirely different subject – the stress of evenly rolling out floured dough, or something. Country singer-songwriter Merle Haggard’s White Line Fever is about the hypnotic effect of long-distance driving as a metaphor for relentlessly ploughing one’s own furrow throughout life. It’s therefore wholly appropriate for the touring roadburn that has claimed numerous past Fall members. In fact it could have well been written for MES himself: “White line fever/A sickness born down in my soul/The years keep flyin’ by like the highlines poles/The wrinkles in my forehead show the miles I’ve put behind me/They continue to remind how fast I’m growin’ old/Guess I’ll die with this fever in my soul”. Mr Smith at his most poignant with a down-played Waitsian subtlety to his croon.

STOUT MAN (Cock In My Pocket, Iggy & The Stooges, 1976) From new album Sub-Lingual Tablet, Stout Man is a re-working of Iggy & The Stooges’ Cock In My Pocket with different (and typically indecipherable) lyrics about a “big man pushing a pram”. The older he gets, the more Smith’s vocal resembles (a younger) Iggy. Here, his throat sounds like he’s been gargling with hot pea shingle.

BEATLE BONES ‘N’ SMOKIN’ STONES (Captain Beefheart & His Magic Band, 1968)
“If you like The Fall you’ll probably like Captain Beefheart,” a passing cleaner once told me. So I listened to Trout Mask Replica, tutted and put on Live At The Witch Trials instead. But you can see the point: Like Beefheart, The Fall were always an anti-band. That’s their attraction. The first time you hear them, it’s as if they’re taking the piss out of all other bands for their precious fucking musicianship and wankery rock posing. They turn the music industry back on itself with experimentalism – whether it’s avant-garde or just an alternative to bland pop fodder. Half the attraction of The Fall is how much they piss off ‘serious’ music fans who think that rock peaked in 1971 with some superannuated session guitarist masturbating a twin-necked guitar. This cover is is disjointed with a deliberately unsettling high-frequency guitar wail, droning vocals and chaotic avant-jazz. But still a lot more listenable than the original. It’s art, not wallpaper: it’s supposed to be confrontational.

Sub-Lingual Tablet is out now on Cherry Red. The Fall play The Green Man Festival on August 22 then tour various UK seaside resorts in October. For more information, visit their website.