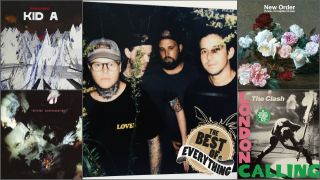 On the surface, rock music is the perfect medium to shock and surprise. From David Bowie sneak-releasing The Next Day to Avenged Sevenfold turning to the prog side with The Stage, often, the best albums are the ones you weren’t expecting at all – the ones which sneak up on you and take you completely by surprise.

South Carolina four-piece Hundredth are preparing to release one such album. Set to be unveiled on 16th June, fourth album Rare trades their trademark blistering hardcore for dense, glistening shoegaze. Determined to “be themselves, no matter what”, they defied what they describe as “walls of their sound and scene tightening around them” by ripping up the rulebook of their sound and writing their new album from scratch, with reinvention at the forefront of their minds.

To celebrate their change of pace, frontman Chadwick Johnson and guitarist Alex Blackwell pick the 10 albums which inspired their own “curveball” album.

Chadwick: “The first time I heard this record, I was in a dark room with headphones (highly recommend). I listened to the entire thing straight through and my mind was blown. It was a redefining moment, almost to the point of using “before I heard Kid A” as a reference point for my musical taste.

In 1997, Radiohead released a game-changer of a record with OK Computer. The album saw them straying from the guitar-driven sounds of The Bends and more into an alternative realm, with layers upon layers of spacey guitar noise topped with abstract lyrics about consumerism and isolation. OK Computer could absolutely be considered a curveball in its own right, however, for sake of this piece, I believe what came next had more spin on it.

Following the commercial success of OK Computer, Radiohead was burnt out and ringleader Thom Yorke wanted a radical change, as he was seeing other bands replicate Radiohead. He battled with writer’s block through the writing process of Kid A, eventually becoming fed up with ‘rock’ world & diving deep into electronic artists like Aphex Twin and Autechre. This led Thom Yorke and Radiohead to put the guitars in the backseat and experiment with the atmospheric sounds and textures from modular synthesisers and drum machine rhythms, in hopes [of] carving their own path – and that they did. It’s a challenging listen at first, but after multiple times through I find myself disappearing inside of it. Initial reviews of the album were mixed, but as it sinks in it has become one of the most reverent alternative albums of all time.”

Chadwick: “The Cure is probably my all-time favourite band and I am fascinated with their journey. Robert Smith has crafted many moods through many albums but to me (and many other Cure fans), Disintegration is the most prolific, and at the time, unexpected.

Coming from the 1987 Double LP Kiss Me, Kiss Me, Kiss Me, which is basically an amalgamation of everything The Cure had been up to that point, Smith wanted to write a masterpiece before turning 30 and he stunned Cure fans with Disintegration. An ebb and flow of distaste and dissatisfaction built upon a slight shimmer of hope. A curveball that I think solidifies The Cure as one of the most versatile bands ever.”

Chadwick: “I am a big fan of both of Joy Division’s cathartic-yet-innocent, loner post-punk LPs, but I find myself leaning towards their next endeavour a little more as I get older. After the passing of vocalist Ian Curtis in 1980, Joy Division continued on as New Order.

In 1981 they released Movement, a stepping stone between Joy Division and their newfound identity, which came two years later on Power, Corruption And Lies. While Movement is a great album, New Order stepped into a different dimension with Power, Corruption And Lies. They redefined themselves, diving into a synth-driven lush of dancy post-punk. Singer Bernard Sumner found his own voice, instead of falling back and replicating the vocal style of Ian Curtis. It feels as if this record is New Order’s statement of their future beyond post-punk and one last nod to their past before they dive into new-wave.

I consider this album a curveball because people didn’t expect New Order to be capable of this caliber of songwriting and commercial success.”

Chadwick: “Violator is Depeche Mode’s fully-fledged catapult to [the] mainstream. It was a redefining record for the band and greatly widened their reach. The predecessors Black Celebration and Music For The Masses established Depeche Mode as an electronic band, but with Violator they shed their synth-pop stylings for a more edgy rock sound. It’s goth, but not cheesy. It’s synthy, but not predictable. It’s rock, but doesn’t sound like rock. Instead of people trying to figure out what it was, it was viewed as an artfully-crafted, sonically detailed mood. I think it still stands up today, 27 years from release.

This album is a curveball because it’s so hard to categorise. Is it rock? Is it pop? Is it dance? Whatever it is, it’s fucking awesome.”

Chadwick: “Following a long period of writer’s block after Give Em Enough Rope, The Clash locked themselves inside of a secluded studio to write what came to be London Calling. With no influence from any outside parties, they began to see beyond their punk past and explore their new fascination with rock-n-roll. The result is a classic and highly acclaimed album that went on to influence a plethora of bands to come.

If I am listening to The Clash, I am 100% listening to London Calling. These songs truly stand the test of time.”

Alex: “When you grow up on the coast it’s hard to avoid beach music. Growing up, I resented it. In school you had to learn how to “shag dance” in gym class. In the car on the way to school, my friend’s dad kept it on the oldies station and every restaurant I worked at blasted it every night, all summer long. I never thought I could appreciate it without bias until I heard Pet Sounds.

Pet Sounds was arguably one of the first “curveball” records. Brian Wilson heard The Beatles Rubber Soul and it blew him away. It’s an escape from the sterile happy-go-lucky surf records preceding it. Wilson transformed The Beach Boy’s sound from dance music to listening music. Pet Sounds was futuristic and progressive. Do some research and you’ll find a ton of great info on it. If you get a chance watch the movie Love & Mercy. It loosely documents the production of Pet Sounds as well as Wilson’s life.”

Alex: “I think I heard Weezer’s Green Album first. I was so stoked on the video for Hashpipe. Like any fan, I searched frantically on Limewire (remember that?) for more material. I then found the Blue Album and eventually Pinkerton.

It took a while for me digest what was going on in Pinkerton. I thought Pink Triangle was funny at first. At a second listen the sentiment sunk in and then the entire album made sense to me. Pinkerton is a dark, gritty, and honest record written by a disillusioned rocker. It took a while for people to catch on to but now it’s a cult classic. I’ll always love Weezer, especially Pinkerton.”

Alex: “I remember walking into my neighbour’s room when I was a kid he had a red Squier Stratocaster with the words Rape Me printed from a label maker stuck on the side. I asked him what that meant and he showed me Nirvana.

I feel like talking about Nirvana is a touchy subject. So many fans and opinions floating around about their music. For me, In Utero is a nostalgic record and I really like Steve Albini (the producer). Riding off the success of Nevermind, the world expected them to settle into the overly-produced mainstream rock world, but with In Utero they blatantly avoided that. It’s abrasive in all the right ways.

They recorded it in two weeks and apparently Albini wouldn’t talk to anyone except for the band the whole time. I think its a perfect follow up to Nevermind. How else do you follow up the one of the greatest rock records of all time?”

Alex: “Cave In’s Antenna hits pretty close to home. Cave In was a full on metal band that felt stuck in their genre and decided to change.

2000’s Jupiter was the pre-cursor, but 2003’s Antenna was Cave In’s real departure from metal and old fans were pissed. Personally, I loved it. Cave In was a band that knew they were growing up and they embraced it. We jammed it in the van all of the time and I still play it a lot. It holds up beautifully. Antenna was spacey progressive rock with so many great songs and clean vocals. They ended up revisiting their old sound on Perfect Pitch Black in 2005, but this tangent was by far my favourite version of Cave In.”

Alex: “The first time I heard The Flaming Lips was mind-blowing. I saw their documentary The Fearless Freaks when I was younger and I couldn’t get enough of them and their approach to playing and writing.

Zaireeka is such a wild concept – I love it. The idea spawned from The Flaming Lips doing The Parking Lot Experiments. Basically filling parking garages with people and playing 40 cassettes at the same time. Zaireeka’s packaging came with four CDs and each CD had four stereo tracks. The album was designed to be played simultaneously on four separate audio players making it completely surround sound. I bought all four on eBay and they just sat around for awhile. Eventually I listened to them all the way through when some friends and I tried mushrooms for the first time. So many sounds floating all over the place. Don’t think I’d do it again – it was way too overstimulating [laughs].”

Hundredth’s new album Rare will be released in 16th June via Hopeless Records. The band are heading out on tour this summer - check their site for full dates.

The story behind The Clash's London Calling album artwork

Frogs, wizards and lots of drugs: Welcome to the weird world of the Flaming Lips