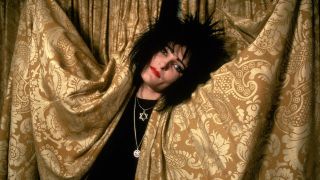 It was the autumn of 1983, and things around Siouxsie And The Banshees were so frantic that they almost didn’t notice what was happening with their latest single, Dear Prudence, a standalone release.

Guitarist John McGeogh had just crashed out of the band amid rumours of alcohol problems, and the Banshees were on tour in Europe with Cure supremo Robert Smith as his temporary replacement. At the same time, Siouxsie and drummer Budgie had just launched The Creatures, while Smith and bassist Steve Severin had set up The Glove.

“It was an insane period for us, extremely busy,” Siouxsie Sioux recalls. “We were just being totally hyperactive.
I think it took its toll maybe a year or so later. John had been hospitalised for stress and overworking, so he was suffering a bit. Robert stepped in, for the second time, as he did in ’79, so the show was still going on, and the touring was all pretty intense and crazy. We went on to record Hyaena together, and then he imploded as well. He just couldn’t cope with it.”

“It was a surprise, but it didn’t really sink in until we’d finished the touring and we were back home for the winter,” says Siouxsie. “Then we thought, ‘Blimey! We got to number three!’ Dear Prudence got played a lot on the radio, and of course we did the Christmas/New Year Top Of The Pops. I don’t remember much about doing it except for I was wearing a new leather dress that a friend had made for me, and stripy tights.” (That performance, the leather dress and the stripy tights are immortalised on the DVD included in the glorious 84-track box set Siouxsie And The Banshees At The BBC, which also contains three audio CDs.)

Dear Prudence was a Beatles song, and the second one that the Banshees had covered from the great double White Album. Previously, the Banshees’ take on Paul McCartney’s rabid Helter Skelter – grotesquely linked to the Charles Manson murders – was included on their 1978 album The Scream. By contrast, Dear Prudence was a gentle John Lennon song written during The Beatles’ Indian retreat with the Maharishi.

Siouxsie remembers approaching The Beatles’ music with a mixture of respect, and Sid Vicious-inspired mischief dating back some years earlier: “When we did the 100 Club Punk Festival [1976], we were wondering: ‘What shall we do?’ And we ended up doing the thing based around the Lord’s Prayer. And Sid and I were laughing, ‘Oh, we should really mess up a Beatles song!’ And that attitude was still there. I remember growing up with the White Album. I loved it for their experimenting. And then it gets fucked up? Much better!”

“You weren’t supposed to film in Venice without getting permission and paying money, which of course we ignored. If you get caught, you either get stopped or you have to pay. The video shows Severin getting escorted by some police.