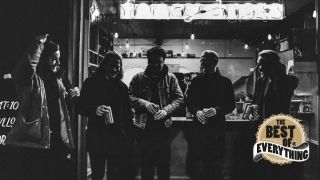 You’d be forgiven for assuming there’s something in the water over in Yorkshire right now. For the last five years or more, the county’s underground rock music scenes – especially those found in Leeds – have been flourishing at an impressive rate, their bands sitting comfortably on national radio playlists, smashing into charts and paving a way for hundreds of their contemporaries in their wake.

To mark the continued creativity of God’s own county, Leeds natives Fizzy Blood join us to celebrate the most essential music coming from Yorkshire right now. You can check out the dates for their upcoming tour at the bottom of the page.

Benji Inkley (vocals and guitar): “Being a rock band from Leeds who have a shout every now and again has drawn us many comparisons, but none more frequently than ‘you guys have a Pulled Apart By Horses vibe going on’. Sure, I can see that plain as day in regards to live performance, as anyone who’s ever seen PABH live will tell you that they’re a non-stop, 24⁄7, unadulterated, overcrowded riff locomotive that’d make a commute via Virgin Trains from Leeds to London on a Saturday afternoon feel like an ASMR spa. We also feel a big strength of ours is our ability to play live with energy, and for people to pick up on that and make the comparison is very flattering. We all started listening to PABH whilst we were still finding our feet in the musical world and have been infatuated ever since. Every opportunity we get to see the masters of live performance tear up a venue, we take it.”

Jake Greenway (drums): “You need to check out their new album, Microshift. It’s just great. They’ve almost evolved into Leeds’ answer to LCD Soundsystem, adopting repetitive synths and drum beats that drive the album from start to finish. I’m still yet to see them live, but hope to make it down to their show at The Brudenell with Martha & Ulrika Spacek. I’ve heard its quite the spectacle. On the new record my favourite track has to be Negative Space. Everything about it is just so goddam catchy, the song itself is nearly seven minutes long but you never get bored because of the great rhythmic and melodic hooks that get introduced throughout the track. Get on buying the album! I hear it got into the top 20.”

Jake Greenway: “The first time I saw these guys live was at a show I was playing at the Library. I’d never heard of them before, but after about two minutes of them coming on stage I remember thinking ‘Shit, these are good’. Since then they’ve released some cracking tunes like Classic M and Birthday Blues, which are raucous and psychedelic. However, their new offering, Little Secret, shows a different side to the band and probably a new direction. The new track is very 80s and nonchalant and hints towards a poppier progression for the band. I love the duel lead vocal they have going on in this track, very cool indeed. Make sure you check this lot out, I expect big things in the future.”

Paul Howells (guitars): “I first got into DPU back when I was a BTEC student at Lincoln College. I came across their single Mona Lisa while browsing YouTube and, at the time, it was a bit of a revelation for me. Matt’s sandpaper voice and the grungy power chords were literally music to my 16-year-old ears. We ended up touring with them last November and I’ve got to say, they’ve definitely still got it. They’re the kings of making a show feel like a party and they’re all very sound geezers; it’s nice to know a band who had an influence on you are actually nice people. So yeah, definitely check these out if you’re a fan of drums being smashed to shit and a good old riff. I would recommend going to see them live to get the full experience though.”

Paul Howells: “A very promising Leeds band that split up way too soon. I’m still including them in this list because their tunes are next level… and it’s our list, so we can do what we want. The tune to dip your toe in with is In Sicily, and make sure you watch the video to go along with it because it’s jokes. I think honestly watching them at Leeds Festival was one of the most powerful shows I’ve ever seen, and it’s a real shame no one else will ever get to experience it.”

Ciaran Scanlon (bass): “I first come across Avalanche Party early last year at the Brudenell supporting our friends Forever Cult. I had heard a lot about them from friends in Leeds, and they eagerly stated that I must see them live. I was not disappointed. From when they started until they finished I was blown away. Their sound, energy and passion struck a chord with me that no support band has ever done before. Throughout their set, their frontman had this possessed presence that made everybody’s hairs stand up. The way he delivered his vocals, it was like watching a someone give a speech. Their presence, sound and energy is why this band are on this list and why I think these guys are ones to watch in 2018.”

Ciaran Scanlon: “I first saw Weirds when we played a festival in Cheltenham called Summerfest. I hadn’t heard these guys before except by reputation, and they certainly lived up to that. The way that each member engaged with the audience was something, they weren’t afraid to assert themselves to the crowd and enjoy themselves among everyone watching. These guys create sounds that are just amazing and create an atmosphere that compliments their monster riffs. These guys are a force to be reckoned with and another one to watch in 2018.”

Benji Inkley: “When Fizzy Blood first began we headed out on the road with this band that we knew nothing about. I’d say that over that the years within the Leeds music scene that they have become some of our closest friends. However, friendships aside every plaudit they are to receive in this paragraph is more than earned. We’ve seen a great many of their shows over the past few years and there hasn’t been a single one where they haven’t had the audience in the palm of their hands, fully entranced. They have the perfect mix of almost other-worldly sounds, seamlessly blended into hard-hitting beats and grizzly bass tones that a Kodiak bear would be proud of. They’ve played some huge shows in the past, supporting Enter Shikari and Marmozets and I don’t think they’ve hit the ceiling yet. They have been quiet in terms of new music releases as of late, but I’m so excited to hear what they have cooking up in their studio cauldron, and so should you.”

Tim Malkin (guitars): “Ok, yes, you got us, we’re pretty good pals with this lot, but we don’t let that cloud our judgement. One of the first gigs I went to when I moved to Leeds was Forever Cult and I remember coming away with ringing ears and Winter’s Glow playing over and over again in my head. Since then, they have only got better, and now with the addition of a fourth member, Wilco, their live sound is stronger than ever. They can also drink a lot of lager.”

Tim Malkin: “It’s always a treat when you see a band play and you can just tell that everyone on stage is extremely good at what they do. This is certainly the case here. Tom Bradshaw brings a great intensity from behind the kit, Tom number two (otherwise known as Thomas Trueman) builds intricate soundscapes with computer/sampling witchcraft while Charlotte Jones delivers some of the most unique vocals you will hear. If you like your electronic music to have a bit more of a punch, this is the band for you. They’re also all really, really lovely people. Don’t you just hate it when that happens?”

Fizzy Blood head out on tour this week. Catch them at one of the dates below:

The top 10 best video games of all time, by Pulled Apart By Horses' James Brown

Idles and Dinosaur Pile Up for Handmade Festival 2018

What does it feel like to be Pulled Apart By Horses?