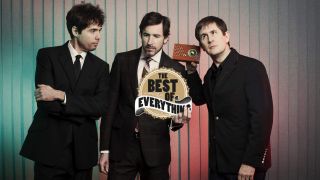 I picked The Mountain Goats for a number of reasons. Firstly, I found it really easy to pick out 10 songs that I love because they have 15 records.

They were always a band that a lot of my friends would talk about – the ones who liked really weird music – so I always assumed they’d be like this spacey dream-pop band, which meant that I never listened to them.

But then we played this festival called Harvest of Hope, a really diverse festival. There were no dressing rooms or anything and it was all outdoors so I thought, ‘I might as well go and watch some bands.’ And I was like, ‘Oh yeah, there’s that band The Mountain Goats that my friends Andy and Brendan always talk about. I’ll go check them out.’

When I saw The Mountain Goats, I couldn’t walk away. John [Darnielle, the primary member and songwriter in the band] was just so engaging, and the lyricism was so well thought out.

He felt so human on stage too, and I really liked that about him. He was playing this massive stage in front of this massive crowd, just himself and a guitar – he didn’t even bring the band – and at no point did he seem over matched by that at all. He didn’t play up to any sort of bravado or anything, he just played songs and told stories and it was wonderful the whole way through. So that’s when I kind of got hooked on the band.

I’m just gonna talk about their top 10 songs in no particular order. So here goes…

NO CHILDREN (Tallahassee, 2002)
During that first show he played No Children, the chorus to which is, ‘And I hope you die / I hope we both die.’ The rest of the audience was familiar with him and so I guessed this was this thing that he does, but he said the first line and then he yelled, ‘All of us,’ and the whole crowd went, ‘I hope we all die.’ I thought that was really cool. Everyone was so involved and the song was immediately stuck in my head, and I needed to hear it again.

JEFF DAVIS COUNTY BLUES (All Hail West Texas, 2002)
Skipping around a little bit on this list, another one of my favourite Mountain Goats songs is Jeff Davis County Blues, which is on All Hail West Texas. It’s a really lo-fi album with just him and a guitar and it was recorded using a tape recorder in his house. I think he was living in Indiana or something at the time, and there’s this line where says, ‘Lost in the Travelodge with the television on and the sound down / I don’t feel so tough / Old issues of Sunset magazine to read / Sleep for twelve hours and dream about home.’ I remember the description in his lyrics really spoke to me, and the whole album __ is this really cool concept record about these different characters in this one particular area of the country that I find to be really fascinating. West Texas is a really sociologically interesting place.

UNMASKED (Beat the Champ, 2015)
Unmasked off the new record Beat the Champ is another great song. I like professional wrestling more than I like almost anything and Beat the Champ is a whole record about Professional Wrestling, so it’s a match made in heaven for me. It’s a luchador [Mexican professional wrestling] thing that your mask is your honour, and this is a song about taking your mask off. There’s a line that says, ‘Like you’re free, like you can breath now / Like they’ve sawn off your cast / Just one more sleeper to see through,’ and it’s about retiring from wrestling. It’s a super cool song.

WOKE UP NEW (Get Lonely, 2006)
Woke Up New was another song that I saw him play at that first show, and before he played it he told this story about how you wake up in the morning and everything is fine for that one split second and then you remember, ‘Oh fuck, I broke up with the person that I love yesterday.’ And then the darkness rushes in from all sides and you just start crying right away. The way he told the story was really funny and self-deprecating, but it had a lot of truth and pain to it as well, and at the end of the story he said, ‘For whoever feels this way in the crowd, I wrote this song for you.’ I thought that was a really cool way to introduce a song, and again really engaging and really human.

HAST THOU CONSIDERED THE TETRAPOD (The Sunset Tree, 2005)
This is one of the saddest songs I’ve ever heard. The Sunset Tree is a record that he wrote that was the second in a series of albums that were autobiographical in a way. We Shall All Be Healed [2004] was about his drug addiction, and then The Sunset Tree is about his abusive stepfather, and pretty much the whole record is about that. It never gets as raw as it does in Hast Thou Considered the Tetrapod, and there’s a line at the end of the song where he says, ‘Held under these smothering waves / By your strong and thick-veined hand / But one of these days / I’m going to wiggle up on dry land.’ It’s an incredibly painful moment of someone’s life to be listening to, and the way he gives it to you is so powerful.

DAMN THESE VAMPIRES (All Eternals Deck, 2011)
This one is just in my list because I like the way that he hits the refrain of, ‘God damn these vampires / For what they’ve done to me.’ It has such an unassuming melody, but it manages simultaneously to be so wonderful.

PINK AND BLUE (All Hail West Texas, 2002)
There’s a song called Pink and Blue that’s also on All Hail West Texas, and it’s really stripped down and super lo-fi. There’s this one line that I love where he says, ‘Nice new clothes on you and an old cardboard produce box for a cradle / I mashed some bananas in a coffee cup and I fed you there at the kitchen table.’ He’s got so many great lyrics. He’s written a novel and he’s involved in other projects as well. He’s probably the most prolific songwriter that I’ve ever seen.

OLD COLLEGE TRY (Tallahassee, 2002)
This song has one of my favourite lyrics ever: ‘I will walk / Down to the end with you / If you will come all the way down with me.’ My fiancé and I have always really liked that line, and she had one of my favourite artists who also did a lot of The Wonder Years artwork do an illustration from the line, and she got it framed for me one year for Christmas. So this song has kind of a special place for me.

PALMCORDER YAJNA (We Shall All Be Healed, 2004)
This song title is impossible to pronounce but it’s on We Shall All Be Healed and it seems to be about this moment of deep drug addiction, and each chorus is slightly different. My favourite one is the last chorus where he sings, ‘And I dreamt of a factory / Where they manufactured what I needed / Using shiny new machines / And the headstones climbed up the hills.’ I always really liked this song and the album has a really cool cover, too.

BROOM PEOPLE (The Sunset Tree, 2005)
Broom People is my last song, and it was another one during that first show I saw by The Mountain Goats that really stuck with me. The description of his house is so evocative: ‘36 Hudson in the garage / All sorts of junk in the unattached spare room / Dishes in the kitchen sink / New straw for the old broom.’ And I always loved the line that says, ‘I write down good reasons to freeze to death / In my spiral-ring notebook / But in the long tresses of your hair / I am a babbling brook.’ That stuck with me from that day as the coolest line from the entire set, and I thought it was such a pretty lyric.

The Wonder Years’ new album No Closer To Heaven is out now on Hopeless.

The Wonder Years' Dan Campbell is a changed man