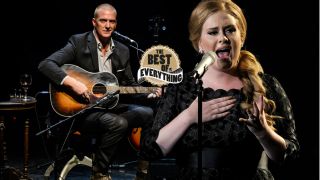 Back in the day, the appearance of a rock riff in a pop song - see Credit To The Nation swiping the Smells Like Teen Spirit intro for 1992 club hit Call It What You Want - would leave listeners gawping silently like abbatoir-stunned cows. These days, we’re all a little more sophisticated, and it takes a special breed of genre-splicer to throw us a loop. Here’s ten potent examples of metal mash-ups done right.

Belgian mash-up artist DJ Poulpi is the man behind such bastardised classics as Toxic Change (Britney Spears vs The Deftones) and Fill My Heart In (Craig David vs Killswitch Engage). He surpassed himself with this epic improvement on Adele’s boring theme song from 2012 Bond film Skyfall, featuring Josh Homme’s slowed down, keening vocal from 2002 QOTSA classic No One Knows overlaid onto the John Barry strings and ponderous piano.

Prolific masher-upper Mark Vidler was behind most of the mixes on the 2007 EMI album Mashed - one of the world’s first legal mash-up compilations. With the addition of Peggy Lee’s smouldering vocal from her 1958 version of the much-covered R&B standard on top of the 1977 Iggy anthem (featuring backing vocals on the la-la-las from David Bowie, retained in this mix), Passenger Fever was one of the most simple and effective examples of the craft.

Thin Lizzy/Pixies – The Boys Are Back In Heaven

At first, the blend of Thin Lizzy’s biggest hit with the abrasive plod of the Pixies’ 1989 major label debut single Monkey Gone To Heaven just seems to arrest Phil Lynott’s vocal of its energy and momentum. But that’s part of the point; according to his own website, creator Phil RetroSpector is “Widely regarded as the ‘undisputed master of melancholy’”. Besides, the genius of The Boys Are Back In Heaven lies in the sensitive splicing of the two sets of twin guitar lines.

Gloria Gaynor/Survivor – I Will Survivor

Splendidly-named mash-up artist DJ Lobsterdust’s website insists his work is “unique, eclectic and surprising.” That may be true of his classic ‘booties’ From Exodus To Revelations (Bob Marley vs Iron Maiden) and Knock Out Eileen (Dexy’s Midnight Runners vs LL Cool J), but these two aspirational self-empowerment anthems fit together like a fist in a boxing glove.

More proof that the most effective mash-ups are often the simplest. Elton’s sweet 1970 ballad - his first hit single - and the Pumpkins’ wistful meditation on adolescence from 1995’s Melon Collie And The Infinite Sadness fit together so well you keep having to remind yourself that these tunes span 25 years of music history. The mashup’s creator Mighty Mike is not to be confused with Mighty Mike the dwarf who has appeared onstage as Mini-Paul Stanley in midget Kiss tribute band Minikiss.

The funniest moment in any of these bootleg collaborations has to be Michael Jackson’s vocal intruding into the first verse of Iron Maiden’s The Trooper (both singles released in 1983). We’re so geared up to hear Bruce scream “You take my life but I’ll take yours too” that Michael coming in with the first verse of Beat It is a moment of laugh-out-loud incongruity. On second listen though, we’re just amazed at how well it fits.

The Bee Gees/AC/DC - Stayin’ In Black

With ten albums’ worth of mash-ups available on Soundcloud, each of them showcasing impeccable musical taste, Australian producer Wax Audio is a Premier League masher-upper. Here the nut-squeezing harmonies of the Gibb brothers go head-to-head with the bucket-of-bolts riff mastery of the Young brothers, flagging up the similarities between the bands; both sets of siblings were born in the UK before moving to Australia, where their bands were formed.

Another Wax Audio joint, although this one’s perhaps not such a perfect fit, musically, aesthetically or spiritually. The bubble-permed 80s Stockholm pomp merchants bang up against the lank-haired 90s Seattle grunge icons in an uneasy sonic alliance that’s comparable to watching a well-groomed Persian cat woof like a mangy Alsatian. Nirvana and Europe actually shared living space in Los Angeles in 1991, when the two bands were housed at the Oakwood apartment complex while Kurt Cobain’s band were recording Nevermind: there wasn’t much inter-band ‘banter’ we weren’t surprised to learn.

YouTuber Isosine takes the opposite approach of most cross-genre mash-ups - using the metal vocal over the pop backing track. As a result, Bat Country Gurls teases all the hooky pop savvy out of A7X’s Bat Country, tastefully plonking Synyster Gates’ nifty guitar solo where the Snoop Dogg rap should be in Katy’s fashionably-misspelt hit California Gurls.