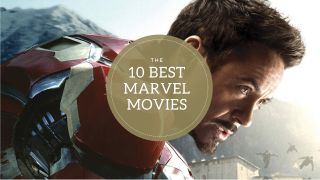 In case you missed it, a significant event occurred within the Marvel Comic Universe this week. We are, of course, referring to the release of Avengers: Endgame, the 22nd instalment in the box-office toppling franchise, and the final chapter to a story Marvel fans have been following for almost a decade.

Of course, superhero movies and high-octane rock music go together like bread and butter, so when it came to picking the best Marvel movies committed to celluloid, alt-metal movie buffs Words That Burn were top of our list.

To celebrate the film's release, we sat down with guitarist Shane Martin and got him to choose the best movies the Marvel Comic Universe (MCU) has to offer.

"The Avengers was the first real superhero team-up film and having all these heroes in one movie drove my excitement levels through the roof. It had every element you could wish for from a super hero movie, and then some."

"The third instalment to the Thor franchise was just epic, and for me was the first in his trilogy where they got the character right. From the beautiful visuals to the rocking soundtrack – and let’s not forget the endless humour throughout the entire film. 'He’s a friend from work!' gets me every time!"

"Infinity War was a heartbreaker. From the opening scene it was pure devastation. From start to finish, this film had me on the edge of my seat wondering who was next. The suspense and unpredictability of what Thanos was capable of with the Infinity Stones left my mind racing after every scene. This was a hard-hitting one for sure and left a lot of us in a heap on the floor. Bring on End Game!"

"Another powerhouse of a film with the biggest array of superheroes ever seen together (bar Infinity War). The airport fight scene was like watching our favourite superheroes charge at each other in a wall of death, all it was missing was a Lamb Of God soundtrack to really kick it off! Also, the introduction to the new Spiderman was a nice touch. It was a long road to get Spiderman into the MCU, but he had finally arrived, and they nailed him."

Guardians Of The Galaxy

"When GOTG was released I really couldn’t wrap my head around it. But the success of the MCU's first walk on the cosmic side was as dazzling as it was funny and was paired with yet another killer soundtrack. It's bright, fun and touching, especially in its very silly, yet very heart-warming finale. I won’t lie: it took me about three watches to get it, but then it just clicked, and I loved it. "

"The tension in this movie is insane, only letting up for a host of incredible fight sequences along the way. The elevator scene, the highway fight, and the climactic battle of the Heli carriers all stand out— but it's the story that comes out on top. With a whispered 'Hail HYDRA!', the film cemented its place as one of the best superhero movies ever made."

"The first of Spidey’s standalone movies in the MCU did not disappoint. At home we have always fought the side of Andrew Garfield and had agreed that he could never be replaced, but Tom Holland got his hooks in me and has been reeling me in since his first appearance in Civil War. I loved how Peter Parker has been portrayed in this film and the choice of the Vulture as the villain was a breath of fresh air. Michael Keaton plays a stormer throughout and the appearance of the two shockers and the Tinkerer was a nice touch. The more baddies the merrier."

Guardians of the Galaxy Vol.2

"Like the first, this movie is visually spectacular and is all action from the get-go. This film delved deeper into Star Lord’s upbringing and made us unexpectedly fall for a 'bad guy' from the first film which lead to an emotional roller coaster ending. I am really excited for Vol. 3!"

"Black Panther had a flawless cast, a gripping story, and some incredible direction. The powerful, well-balanced battle between King T’Challa and Michael B. Jordan’s antagonistic Killmonger is a lethal and fantastical experience. Our first look at the Wakanda tribe and homelands was a nice change and again the score composed by Kendrick Lamar was just banging. Wakanda Forever!"

Robert Downey Jnr was born to be Tony Stark. As always, Marvel know how to pick the right cast. I have always had a soft spot for Iron Man, and I love how this film became the foundation of a much larger world that would, over the next ten years, captivate and inspire a generation, and go on to be one of the greatest cinematic universes in history.

Pyres by Words That Burn will be released later this year. Check out new single Arise below