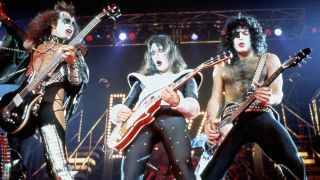 You wanted the best and you got the best! For all of you going to Download this weekend, there will be a glorious finale to the whole shebang when Kiss perform their headlining set on June 14.

From the self-proclaimed Hottest Band In The World, we all know what to expect – a stage show big, so over-the-top, and so full of pyro that when planes are flying over Donington Park to nearby East Midlands airport, the pilots might think they’re landing in a war zone.

We also know what songs to expect. The classics. Anthems such as Detroit Rock City, Love Gun, Lick It Up, God Of Thunder, Shout It Out Loud and Rock And Roll All Nite.

There might be a surprise or two in the setlist. In the run-in to Download, the band’s shows at European festivals have included a few cult classics – including three songs from their heaviest album, Creatures Of The Night.

But when you’ve got as many great songs as Kiss have – and they’ve got dozens – there’s no way you can cram them all into a two-hour set. So here, as an appetizer for the main event on Sunday, we present the 10 best Kiss songs you won’t hear live…

And if any Kiss fans are wondering why this list does not include Rocket Ride – the mid-70s stomper written and sung by Ace Frehley – it’s because you might well hear it at Download, when the former Kiss guitarist plays on the Saturday.

In 1982, with Ace Frehley out of the band – although his exit had not been made public – Kiss bought a little time with a best-of album, Killers. And alongside vintage hit songs were four brand new tracks recorded with stand-in guitarist Bob Kulick. Nowhere To Run was the best of them. Written by Paul Stanley about what he described as “a quick, torrid relationship”, it had a ringing guitar riff reminiscent of The Who’s Won’t Get Fooled Again – for Kiss, such Anglophiles, The Who were a major influence. And Paul sang it with everything he had. “Writing that song was cathartic,” he said. “Because what I couldn’t say to her, I could put in a song, if only for myself.”

The second Kiss album Hotter Than Hell is arguably their most influential record – its raw, garage-rock feel an inspiration to grunge bands, and its heaviest song, Parasite, covered by Anthrax. Comin’ Home was written by Paul Stanley in a hotel room when he was homesick for New York. It was just an album track, buried on side two. But when the band performed on MTV Unplugged in 1995, they picked this song as the opening number, and in the acoustic format it sounded better than ever before.

For much of the 80s, Gene Simmons was on autopilot, too busy with other projects – acting, producing other bands, and launching his own record label – to bother writing any decent songs. It was Paul Stanley who carried Kiss in this time. He wrote all the hits from that decade: Lick It Up, Heaven’s On Fire, Crazy Crazy Nights. And one of his best from those years was Tears Are Falling, from the 1985 album Asylum. The riff was heavy and dramatic, but in the vocal melody and the big chorus was a finely tuned AOR sensibility. And really, get a load of Paul in the video – sporting the gloves of shame…

Third album Dressed To Kill, released in 1975, is the band’s most pure and stripped-down rock ’n’ roll record, its tone set by opening track Room Service. It has a frantic energy matched by the sexual charge in Paul’s lyrics. “I lived on the road at that point,” he explained. “I was in my element getting room service in any way, shape or form it came.”

If ever a song put the ‘power’ into ‘power ballad’, it’s this one. In reaction to the pasting that Kiss took from fans and critics alike for their artsy-fartsy concept album Music From The Elder, the band delivered in the follow-up Creatures Of The Night, the heaviest record of their career. It had the biggest drum sound heard since the heyday of John Bonham. And that balls-out attacked extended to the ballad that Paul Stanley brought to the album. I Still Love You has huge emotional power, with Stanley digging as deep as he’s ever done. And all around him is a sound like thunder.

With the 1979 album Dynasty, Kiss alienated a huge number of fans with the disco-influenced hit I Was Made For Lovin’ You. For the kind of diehard rockers that got behind the ‘Disco Sucks’ protest campaign, I Was Made For Lovin’ You was viewed as an act of betrayal. Worse, the whole of Dynasty had a lightweight pop sound. But bollocks to all of that. Dynasty is a great record, among the best that Kiss have ever made, and Magic Touch is one of the standout tracks. Paul Stanley revived it on his solo tour in 2006, recorded for the 2008 live album and DVD One Live Kiss – from which this clip is taken.

3. A WORLD WITHOUT HEROES

If Gene Simmons could turn back time, as his former squeeze Cher once mused, he would forget all about the crazy idea he had in the early 80s about Kiss making a concept album. Music From The Elder was the soundtrack to a movie that was never made; an art rock statement that, in commercial terms, died on its arse. But for a small and devoted number of Kiss fans, this weird and wonderful album is something to be cherished. One such fan is Chris Dale, whose band Sack Trick made a tribute album called Sheep In Kiss Make-Up, on which they paid homage to The Elder by condensing the whole thing into a 13-minute highlights package. And while Gene remains embarrassed by it, The Elder is an astonishing piece of work that features one of the best songs he has ever sung. Based on something Paul had written, called Every Little Bit Of Your Heart, the song was then reworked by Gene and producer Bob Ezrin, with lyrics supplied by one of Ezrin’s former clients – rock’n’roll legend Lou Reed. The result was A World Without Heroes, a delicate ballad with a mystical quality and a beautiful guitar solo from Paul. It’s Kiss – but not as the world knows them.

When Paul Stanley wrote this pretty love song on acoustic guitar, he wasn’t thinking of it as a Kiss track. In fact, he wanted Rod Stewart to record it. But when Peter Criss heard Hard Luck Woman, he felt that he could do a better job than Rod The Mod, as he explained to Paul in typically blunt manner. “Fuck Rod Stewart,” the drummer said. “I’ll sing the shit out of it.” Criss did exactly that – albeit with the subtlety the song called for. And it was the big hit from the Rock And Roll Over album, making US number 15.

No Kiss album is as underrated as 1980’s Unmasked. And it’s not just fans that have dissed it. Paul Stanley has too. “I think Unmasked is a pretty crappy album,” he said. “It’s wimpy.” Well, Mr. Starchild, you’re wrong. What Kiss delivered with Unmasked is a brilliant pop rock record. It’s full of great songs: Is That You, Talk To Me, Shandi, Naked City, and a borderline-insane track from Ace Frehley, Torpedo Girl. Best of all is the one song from the album that even Paul still loves. He wrote it, after all. And as he said: “Tomorrow is really a great song.” More than that, it’s one of the greatest power-pop songs of all time. A true lost classic.