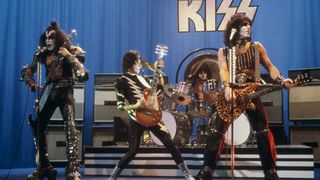 “We were convinced that we were making our Sgt. Pepper,” says Kiss bassist/vocalist Gene Simmons of his band’s greatest folly. Music From “The Elder” was an art-rock concept album based on a fantasy tale written by Simmons and conceived as the soundtrack to a Hollywood blockbuster. But the movie was never made, and the album was an overblown disaster.

By 1981, Kiss were in chaos. Alcohol and drugs were destroying the band from within: drummer Peter Criss had been replaced by Eric Carr, and guitarist Ace Frehley’s behaviour was becoming ever more erratic. Amid this instability, Simmons and guitarist/vocalist Paul Stanley were uncertain of what kind of record Kiss should make after two pop-oriented albums – 1979’s Dynasty and 1980’s Unmasked – had alienated many fans.

“We didn’t know which direction to go,” admits Simmons. “So we decided to bring Bob Ezrin back.” Ezrin had produced Kiss’ hit 1976 album Destroyer; more recently, he’d worked on Pink Floyd’s mega-selling The Wall. When he read Simmons’ short story, titled The Elder, Ezrin saw a chance to make another concept album like The Wall – “a big statement”, as he told the bassist.

The story of The Elder, written by Simmons during a stay at the Beverly Hills Hotel, was allegedly a metaphor for good and evil. “The Elder are a life-form without body,” he explains. “They are benevolent, but committed to the balance of opposites. And when darkness gets too strong, a hero is born to restore the balance.”

Ezrin outlined this kindergarten-level sci-fi narrative on a blackboard when the band began writing songs at Ace Frehley’s home studio in Connecticut. On the producer’s recommendation, Lou Reed was enlisted as a co-writer on two songs, the club-footed Mr. Blackwell and choral folly A World Without Heroes.

The album was recorded in Ezrin’s studio on a farmstead near Toronto. “It was the dead of winter,” Simmons recalls, “and outside it was all ducks and horseshit.” There was one notable absentee at these sessions. Ace Frehley hated the concept of The Elder; he ended up recording just one song for the album, Dark Light.

Frehley had a lucky escape. For a band that built its success on simplistic anthems, Music From “The Elder” was a huge leap in terms of ambition. Sadly, the vision far out-stripped the reality – the likes of Just A Boy and The Oath sounded like a bunch of brickies trying to be Andrew Lloyd Webber. Worse, shortly before the album was released in November 1981, the track sequence was altered, rendering an already garbled storyline incomprehensible. “When the album came out we were embarrassed,” says Simmons.

The bassist claims that a movie deal was close to being made, with actors signed up for key roles. But in the end, the movie got lost in “development hell”. To add insult to injury, it was the first Kiss album that failed to go gold in the US. “It bombed,” Simmons says. “There’s just no other way to look at it.”

Over time, the album has come to be regarded as a cult classic by certain Kiss fans. “Every year we get requests for an Elder tour,” Simmons laughs. More bizarrely, Seb Hunter, author of heavy metal memoir Hell Bent For Leather, is seeking funding to make his own movie of The Elder. For his part, Simmons is still embarrassed by the whole fiasco.

“That was the one time I would say that Kiss succumbed to the critics,” he says. “We wanted a critical success. And we lost our minds.”