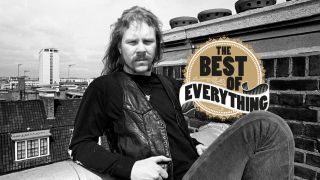 Even though Metallica frontman James Hetfield frowned upon ex-bassist Jason Newsted indulging in various musical projects outside of the band, Papa Het himself is no stranger to lending his unmistakable roar to myriad releases over the years. Here’s 10 of the best…

10. CALI HETFIELD – Crazy For You (2015) Papa Het collaborating with his 16-year-old daughter on an Adele cover is both sweetly heartwarming and reminiscent of two separate Bad News jokes (Vim Fuego performing Purple Haze on Opportunity Knocks aged 11 with his dad on trumpet, and playing acoustic Mary Hopkin covers in a wine bar). This footage shows our Jaymz coming full circle, from the pimply shrieking teen of No Life ‘Til Leather to the proud dad of his own singing teen (albeit one with better skin) – but Metal Militia this ain’t.

9. JIM MARTIN – Disco Dust / Barsoap Hair (Milk And Blood, 1997) For his lo-fi solo debut, the Big Sick Ugly pumpkin farmer (and old schoolfriend of Cliff Burton) pulled in some favours from his Metallichums, writing the song Fatso’s World with Jason Newsted and inveigling our man Hetfield along for some edge-of-hearing backing vocals on two tracks. Amusingly, the Hetmeister’s contribution to these quirky album highlights largely consists of the sounds “Yeeah-yeeaahh” and “Yo-ooh-whooaa!”

8. PRIMUS – Eclectic Electric (Antipop, 1999) Hetfield’s six-string contribution to this brooding Floydian jam – alongside Faith No More’s Jim Martin – isn’t immediately evident, at least until the jagged rhythm stabs around the seven minute mark. But the collaboration cemented a longstanding friendship between the two Californian bands; Kirk Hammett went to school with Les Claypool, and the Primus bassist tried out for Metallica following the death of Cliff Burton.

7. DANZIG – Possession (Danzig, 1988) “I’m pretty sure he just sang the Possession parts!” recalls Danzig of this Het-indebted debut cut, and again that tell-tale growl is in subtle evidence on this irresistible chorus. For contractual reasons Jaymz wasn’t credited on the sleeve, with the result that many fans spent many years thinking “whoa, Glenn sounds just like Hetfield there!”

6. JAMES HETFIELD – Don’t You Think This Outlaw Bit’s Done Got Out of Hand (I’ve Always Been Crazy: Tribute to Waylon Jennings, 2003) Papa Het’s dad Virgil was always a big fan – and latterly a friend – of The Dukes Of Hazzard balladeer Waylon Jennings. So naturally, James seized the chance to rock up this 1978 hit single on a tribute album to the recently deceased country legend in 2003. Hetfield also played all the instruments, including some shit-hot drumming that evokes the apocryphal Lennon quote about Ringo, suggesting that Lars isn’t even the best drummer in Metallica.

5. GOV’T MULE – Drivin’ Rain (NASCAR: Crank It Up, 2002) Once again alongside his old jamming pal Les Claypool on bass, Hetfield dominates the vocals on this song by the Allman Brothers-affiliated Southern rockers for an auto-themed NASCAR compilation in 2002, elevating the tune from affable bluesy toe-tapper to a vital must-have for the savvy metalhead. Gov’t Mule are particularly popular within the Metallica famil-eh; Jason Newsted joined the band for a string of live dates around the same time.

3. CORROSION OF CONFORMITY – Man Or Ash (Wiseblood) In the midst of the controversial Load era in 1996, Hetfield helped out his North Carolina buddies COC with some powerful trademark snarls on this weighty sludge crawl from the band’s best-selling LP. In the late 80s, COC had advertised in LA punk zine Flipside for a singer in the James Hetfield vein, and it doesn’t get closer to the James Hetfield vein than James Hetfield.

2. QUEEN – Stone Cold Crazy (The Freddie Mercury Tribute Concert, 1992) Metallica’s toughened-up take on Queen’s proto-speed metal headbanger from 1974 – issued as the b-side to Enter Sandman – caught the ear of Brian May, who kindly offered the band the opening slot at 1992’s Wembley Stadium mega-benefit. Hetfield was later invited to crank it onstage with the remaining members of Queen – plus Tony Iommi! – and he did look a little strange prowling the stage sans his Explorer guitar.

1. DANZIG – Twist Of Cain (Danzig) James originally met the former Misfits frontman at a Black Flag show, and Metallica went on to be Danzig’s biggest cheerleader, taking his new eponymous band on the road as support on their 1988⁄9 Damaged Justice tour. “He was hanging out with us in LA. I had to go back to the studio. He said he wanted to come along. I was like, ‘Oh, sure!’” Glenn explained to blog site Citypages in 2013, revealing the breezy spontaneity of Hetfield’s discreet but distinctive backing vocal on this classic debut opener.