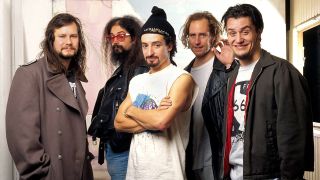 One band who have been defying genre conventions since day one are sound wizards and all-round rock gods Faith No More. Their brand of rock, pop, lounge, funk (and whatever else takes their fancy) loaded onto a heavy metal base, is quite the concoction – an eclectic brew that the alternative metal genre was made for. And while some of these ten tracks may feature elements of other musical styles, their core is still one of rock solid heaviness.

This headbanger is basically split into two sections, with a desolate, western themed first half mutating into a devastatingly crushing, wall of sound for the second half. Sure it takes two minutes to explode, but when it inevitably does, it is easily up there with some of the group’s most bludgeoning compositions. It needs to be too with lines like ‘you’re only happy when you’re pissing me off’…

Grating off-key vocals aside, this closer to the group’s sophomore release Introduce Yourself is as heavy in intent as it is in sound. Spirit is mostly based around large spacious drum blasts and a vintage thrash riff, not really exuding the flash theatrics that the group would become known for. However if you’re just looking for a hard-hitting banger, then this one will certainly suffice.

The band waste no time on this two-minute, speeding bullet from Album Of The Year, utilizing twisted riffs, driving beats and maniacal vocals in the blink of an eye. The quick-fire, adrenaline capsule was clearly an early catalyst for bands like The Dillinger Escape Plan with its topsy-turvy transitions and tight, spontaneous rhythms - highlighting FNM’s timeless inspiration on modern day heavy metal music.

Thick slabs of bass and crazed vocal screams are the order of the day on this schizophrenic firecracker. The track sees frontman Mike Patton spit the song title with machine gun rapidness (a clear influence of Jello Biafra from The Dead Kennedys), while the instrumental section attempts to keep up with the eccentric frontman, before ultimately, derailing under its own intense pressure. Heavy through sheer persistence alone.

Talk about a comeback track. The second single from last year’s Sol Invictus marked the group’s return after 18 years, and boy does it pack a punch. The middle-eastern keyboard flourishes help to give this one an exotic flavour, leaving the track in a fine balance between raging brutality and euphoric bliss. Don’t be seduced by the song’s mysterious beauty though – it is actually one of the group’s hardest hitting tracks to date.

The aptly titled Collision does indeed sound like two immovable forces coming to blows, with a tense verse section giving way to a dynamite-lit chorus. This no-nonsense, statement of intent from their 1997 release Album Of The Year showed that the group hadn’t mellowed with age, with the ultimate winner being the listener.

This chugger from 1992’s Angel Dust stands as one of the band’s more straightforward metal tracks. Powering forward courtesy of some industrial metal sounds on the drums and guitars, Malpractice beats the listener into submission throughout its pummelling four-minute duration. However, it’s Faith No More so expect an inspired, out-of-the-blue violin section thrown in for good measure too - a quirky musical trademark of the group that is fully realised on this gem.

From the largely underrated 1995 LP King For A Day… Fool For A Lifetime, the hammer-horror nightmare Cuckoo For Caca stands as one the band’s heaviest and most demented songs to date. A completely over-the-top performance by Patton drives the track into bizarro land, complimented by an equally twisted instrumental backdrop. Patton gets the plaudits here though, thanks to a vocal delivery that sounds like a combination of Devin Townsend and Jello Biafra on helium.

Patton gets super sadistic on this brutal cut fromThe Real Thing, firing off vicious lines like there’s no tomorrow. The unique vocalist is further supported by some killer riffs and a brain scrambling drumbeat, with the only conservative moments reserved for the rumbling bass booms. Surprise! You’re Dead! is a tempo transitioning masterclass.

Psychotic keyboard stabbing gives you everything you need to know about this grim track. From the outstanding Angel Dust, the wonderfully titled Jizzlobber is a heavy metal titan in every way. Yet again Patton’s incredible vocal register is on display, providing the perfect frenzied fodder for the harsh riffage to clash against. Jizzlobber is their darkest metal song to date, and evidence that the alternative stalwarts can shatter eardrums with the best of them.