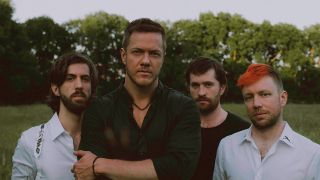 Imagine Dragons are the perfect 21st century band: a boundary-blurring assimilation of rock, pop, electronica, hip hop and R&B that binds together music’s past and present and presents it as a gleaming future. Their post-genre approach has put the Las Vegas four-piece up there alongside Twenty One Pilots as one of the great success stories of the digital era – their five biggest songs have been streamed more than 3.5 billion times combined.

But ID’s epic sound is a Trojan Horse to smuggle in far more personal concerns – frontman Dan Reynolds lays bare his battle with depression and his disillusion with the Mormon faith in which he was raised, while the band are vocal supporters of the LGBT+ youth community. Their critics decry them as contrived or cynical, but there’s an all-too-real desperation and desire for something better beneath the surface gloss, as their top 10 best songs prove.

Modern R&B retooled for an arena rock audience: Dan Reynolds’ opening flow gives way to a billowing chorus carried aloft by subtle but distinct ‘whooah-oh’ chants. It’s the Imagine Dragons musical MO in a nutshell: universal pop with a desire to be all things to all people. Job done.

Imagine Dragons' broad brush strokes can’t mask the musical intellect at their heart: guitarist Wayne Sermon, bassist Ben McKee and drummer Daniel Platzman all studied at the Berklee College Of Music. That training informs this 2017 single, from the choppy chorus to the burst of free-flowing guitar that brings it all to its glorious conclusion.

The slow-burning title track of their second album, and the closest Imagine Dragons have come to a ballad, complete with In The Air Tonight-esque mini drum breakdown. “All I believe, is it a dream?” asks a desperate Reynolds, though whether he’s referring to a failing love affair or his own relationship with the Mormon church isn’t clear.

Many of the best Imagine Dragons songs are built from the beat up. Here, a simple handclap rhythm acts as a launchpad for a stadium-sized anthem with a drop-and-release chorus that hits like an industrial hammer. But it’s not all grand-scale gestures: listen for the delicately pickled acoustic guitar that brings unexpected texture to the bombast.

Reynolds is at his most self-lacerating on this jagged Night Visions track, offering himself up to the subject of his attentions. “When the sky turns gray and everything is screaming/I will reach inside just to find my heart is beating,” he sings over a glitchy, crunching backing.

Imagine Dragons at their most simplistic, even if things are never really quite that simple. The open-armed rhythms and Reynolds’ singsong cadences give this Evolve track a nursery rhyme air, but the backing track is as detailed as anything they’ve recorded. Bonus points for a unexpectedly blazing old school solo from guitarist Wayne Sermon.

An early Imagine Dragons staple, first appearing as the title track on a 2011 EP. But it’s the re-recorded version that’s the kicker: an eastern-influenced guitar figure wraps itself around handclap rhythms, before a stacked vocal hook sends everything rocketing skywards.

Imagine Dragons don’t do small-scale, but Mouth Of The River is grandiose even by their standards. The fuzzy synths of the verse suddenly give way to an explosion of gospel-inspired exhilaration that rushes by like a bursting dam. The lyrics might find Reynolds working through his own inadequacies, but musically this is utterly triumphant.

Imagine Dragon’s fourth EP, Continued Silence, was a tipping point. It was their debut major label release and marked the first time they’d worked with British producer Alex Da Kid. Suddenly they sounded like genuine contenders. The EP's second track, Demons builds from a gentle lilt into an exercise in large-scale catharsis: “Don’t get too close, it’s dark inside,” warns Reynolds. “It’s where my demons hide.” Torment never sounded so sweet.

As well as being a fantastic song in its own right, Imagine Dragons’ breakthrough hit is a perfect primer for everything that has made them successful: the tension between rhythmic snap and distorted beats, the wordless chants that precede the simple-but-effective chorus, the self-empowering lyrical theme. It’s big and bold, but thanks to the band’s pop nous and Reynolds’ willingness to lay it all on the line, it’s never cynical, much like the band who made it.