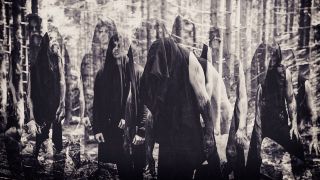 A land of otherworldly landscapes and unforgiving climates, Iceland is widely celebrated for its outstanding natural beauty, nordic history and Björk.

Yet bubbling away beneath the surface in the unassuming nation's capital of Reykjavik, the desolate wastes of waterfalls, lava fields and hot springs have been channelled directly into a truly unique expression of bleak and volcanic black metal.

Characterised by dissonant guitar work, frenzied vocals and celestial atmospheres, Icelandic black metal is a true force to be reckoned with - from the volatility of Abominor, through the hallucinogenic meanderings of Wormlust to the primitive transcendance of NyiÞ.

The late 80’s and early 90’s spawned bands such as Flames of Hell, and Solstafir from the newly emerged genre - the latter of which left their black metal beginnings behind to expand their sound into post-rock territories. It seems smaller waves were being made in the North Atlantic than their Norwegian counterparts.

However, over the last 20 years or so, the now thriving second wave has evolved into a multi-faceted beast, revered for being forward thinking yet true to its black metal essence.

With a comparatively small population, and isolated from much of the world, Reykjavik may seem like an unexpected place to give rise to such a highly esteemed black metal scene.

However, what’s lacking in size is more than made up for in unparalleled output by a small group of highly devoted musicians. Many of whom often find themselves in multiple bands, as well as actively taking part in running labels, recording studios and festivals.

One such festival, Ascension (formerly known as Oration), orchestrated by Dubliner Stephen Lockhart (AKA Wann), has gained popularity as a showcase for the best of the best. Lockhart (who emigrated to Iceland to establish Studio Emissary, where many of the scene’s highly acclaimed releases have been produced) has been involved in Slidhr, Sinmara and Wormlust whilst heading his solo project, Rebirth of Nefast.

Iceland’s largest festival Eistnaflug - usually boasting more mainstream line-ups - has garnered a more international following over the years. The label Vánagandr, run by members of Misþyrming and Na∂ra, is also testament to the contributions of the individual to the cause.

Reykjavik’s exclusive inner circle was captured in 2018 by Wormlust’s multi-instrumentalist Verði ljós’ (aka H.V. Lyngdal) - an accomplished photographer - in his photo publication, Svartmálmur. Documenting a host of Iceland’s biggest names, as well as various lyrical passages, Svartmálmur offers a candid perspective into the world of faceless forms and mysterious rituals.

Of course with any expansion of a genre, there will always be those that seek to break the mould. In more recent years, outfits like Au∂n, Zhrine and Kaleikr have opted to abandon the masks and blood soaked aesthetic to explore more sombre and progressive sensibilities.

Perhaps it’s a reaction to the extremity of the landscape, the close proximity or the maddening isolation of the location that is to blame for the emergence of the Icelandic scene.

From its infamously violent gestation to the fierce unity of the present day, its participants express true dedication to keeping it alive by holding a yearly Úlfsmessa (wolf’s mass) where the biggest contributing bands and acts come together for a one off collaborative performance that is not to be missed.

Icelandic for “Black Death”, Svartidau∂i was formed in 2006 by frontman Sturla Viðar and guitarist Þórir Garðarsson (who also plays in Sinmara, amongst others). A string of demos eventually led to the release of their highly acclaimed debut full-length, Flesh Cathedral in 2012.

Shrouded in secrecy, these feverish innovators of much of the stylistic elements that make the Icelandic black metal sound instantly recognisable, are partly responsible for pioneering the discordant textures and psychoactive overtones that have spearheaded the diabolical Icelandic cult into key players in the international black metal scene.

Known for their explosive on stage energy and pivotal role in the scene. Misþyrming was formed in 2013 by frontman and guitarist, D.G as a solo project, before recruiting members of Na∂ra and Carpe Noctem to take the band to the stage. D.G’s esteem extends far beyond musical capabilities.

Running the exclusive Vánagandr label with Misþyrming and Na∂ra bandmate, T.Í, he is also a key member of orchestrating the yearly Úlfsmessa ritual. Misþyrming put themselves on the international map after the release of their seminal debut, Söngvar elds og óreiðu.

While existing as a swirling mass of bludgeoning riffs and vitriolic sonic abuse, Misþyrming prove they are not afraid to conjure more emotive atmospheres with their latest release, Algleymi.

While most of the scene is expressing itself through hoods, fire and blood, Au∂n find themselves funneling the cold and sombre icelandic wilderness into a more depressive incarnation of black metal.

With an air of an Emperor influence to them, their two full length albums Au∂n S/T and Farvegir Fyrndar display a melodic and sorrowful sensibility that hits as a breath of fresh with the adoption of a smarter, mournful aesthetic and expansive triple-guitar layering.

Considered another major cornerstone of the scene’s driving force, and with founding members Ö and T.Í participating in more than one of the most illustrious icelandic bands, it seems this extraordinary camaraderie is the glue that keeps much of the scene together.

Taking a raw, almost blackened punk approach to production, Na∂ra are set apart by their impassioned vocal performances and no-nonsense musicianship. A sense of intense melancholy grips their sophomore full-length, Allir Vegir til Glötunar to which a follow up will surely be eagerly anticipated.

Directed by the one man army that is Stephen Lockhart (Wann), Rebirth of Nefast is the Studio Emissary head engineer’s main creative focus. Being head of the institution that so many revered artists have passed through since its creation has clearly had an impact on Wann’s sense of what the Icelandic black metal essence really is.

This prime position and insight has led to a project that encompasses all that is so highly sought from the genre. Having served time as bassist in Sinmara, Wann, a main member of the Irish band Slidhr, has established a marked connection between the two countries, bridging the gap in the international metal market.

Another one-man project conceived by Sinmara guitarist Garðar Jónsson, Almyrkvi expands on the already chaotic complexities of their peers into vacuous cosmic realms.

Calling on members of Svartidau∂i, Wormlust and Slidhr in order to perform live, one would expect the unmissable experience of a hypnotic lure into the void.

With a sound rooted in the death metal beginnings of their previous incarnation, Gone Postal, Zhrine have succeeded in allowing black metal to seep into their core without losing their principles.

Much like Au∂n, their music dynamically captures the gloomy atmosphere of the volcanic rock that birthed them, in a more clean cut fashion. This isn’t to say that their monstrous debut, Unortheta isn’t lacking in the aggression, intricate guitar work, and intense howls they have garnered a reputation for.

H.V Lyngdal’s Wormlust are one of the longest running bands to emerge from the Icelandic black metal scene. Born from the ashes of the now long forgotten Myrk (who are credited with sparking the movement), one such member - Lyngdal could be regarded as a forefather of the scene as we know it.

Steeped in wide-eyed mania, and suitably psychedelic imagery to boot, their first full-length, The Feral Wisdom is an acid-trip gone horribly wrong into trembling madness. Sharp twists and turns at almost every point pulls the unsuspecting listener through this mind expanding monument.

Emerging at the turning point of Iceland gaining worldwide recognition, Sinmara, along with the likes of Svartidau∂i and Misþyrming, released their majestic debuts not a moment too soon.

Formed by Ólafur Guðjónsson with the cooperation of Reykjavik’s ascending elite, Aphotic Womb is a solid demonstration of relentless sinister energies, underpinned by dark esoteric motives - a black metal offering that does not mess about.

After releasing a highly significant split with Misþyrming in 2017 (Hof/Ivory Stone), Sinmara have conquered distant shores on the back of their latest savagely chaotic release, Hvísl Stjarnanna.

Seminal agitators Mannveira, encapsulate a total antithesis of what the majority of the Icelandic black metal scene seeks to preach. Utilising their vessel as an instrument of sheer nihilistic malevolence and contempt for the human race, their debut EP, Von Er Eitur, an audible cess-pit, showcases the signature Icelandic sound in extremis whilst completely lacking any semblance of fidelity.

Although Mannveira are one of the few bands that isn’t built of the scene’s prominent figureheads (aside from one minor connection to Na∂ra), this doesn’t invalidate Mannveira’s place amongst the shoulders of Iceland’s giants.