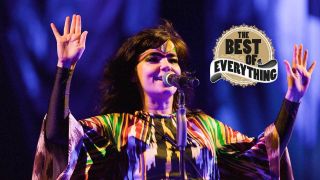 It’s so hard to put into words what it is I love about Björk. All her records sound so different it’s actually quite hard to explain who she is. But if you want to really appreciate Björk, you have to start from the beginning and grow with her, and as the records progress you slowly open your mind to her whole creative evolution. It’s not just about the songs, but all the feelings and the visuals associated with her music. And she does things with her voice only she can do.

She’s been my favourite female singer since I was a kid, and she writes genuine music from the heart: not to be rich and famous, but because that’s how she expresses herself. And she’s never changed for music. She tries to change music instead. That’s why she’s so great: a lot of people adapt their sound to fit what they think people want to hear, but Björk tries to make people adapt to what she wants to sing. That’s so cool!

She has a lot of good songs; so even her number 10 is way up there above other people’s songs. I actually feel bad giving her a ‘10’. But let’s kick it off with a song off her first album…

**10. THE ANCHOR SONG **(Debut, 1993) I love The Anchor Song. The melody is so simple, and it’s really weird. I don’t even know what instrument she uses. But she really captures the feeling of freedom through tragedy with this one. The sea represents chaos, and she’s talking about the ocean in relation to those moments of chaos where you are your weakest, but where you’re also your freest. Do you know what I’m saying? You only come out stronger and smarter from those situations. Like, she’s not saying this is where I live and it’s pretty. She’s saying this rocky spot full of emotional turmoil is my life, and I feed off it.

**9. WHO IS IT? **(Medulla, 2004) Medúlla is one of Björk’s later, weirder albums. Her earlier records had more traditionally arranged pop songs, but with her creative spin on them, whereas the later ones just got weirder as they went. And I don’t mean weird in a bad way, just in the sense that they had less traditionally arranged songs. Who Is It is her way of showing that she can write a structured pop song by using really weird production. On Medúlla all the instrumentation and beats and everything were done by human mouths – it was 100% a cappella. So you had people like Mike Patton and Rahzel the hip-hop artist making the beats with their mouths, and Bjork did all the instruments using hers. I think it’s really cool hearing such a catchy song where all the instruments are just weird noises, but the song is so pop it could’ve been on her first album, and the fact that she can do that is amazing.

**8. I’VE SEEN IT ALL **(Selmasongs: Music from the Motion Picture Soundtrack Dancer in the Dark, 2000) This is the collaboration she does with Thom Yorke from Radiohead for Dancer in the Dark. In 2004, around the time Catalyst came out, I did a phone interview with Björk - because they wanted another musician to interview her - and I asked her why Dancer in the Dark was so amazing and she did so great but then she never acted again. She said that it took so much out of her, and she just wanted to be really, really good at one thing and never spread herself too thin, which I thought was interesting. She said that the emotion the movie took out of her was a lot. I’m a big musical fan and I love musicals, so having my favourite singer do sort of a dark musical was pretty awesome, and it’s something we probably won’t see again.

**7. IT’S OH SO QUIET **(Post, 1995) From what I understand she doesn’t particularly love this song. I’ve seen her a bunch of times and she’s never played it live. But again being a musical fan, I remember that video coming out and it had such a big impact on me. It’s such a different song for her as well. There’s been nothing that sounds anything like it from her since then, and so I think it should be in the top ten. The Spike Jonze video is so great, too. It’s like The Muppets meets West Side Story. But I think what’s so cool about it is not only does it lyrically symbolize a relationship and being in love, but also the way she sings it really makes you aware of how bipolar being in love can be: it can be very peaceful one moment and then there’s this explosion of emotion the next. Everything about the song - from the lyrics to the way she sings it and the music video – encompasses those feelings involved with being in love with someone and overreacting to your emotions.

**6. UNRAVEL **(Homogenic, 1997) Unravel is a very simple song. It’s very short too, but it’s always been one of my favourites. ‘While you are away, my heart comes undone / Slowly unravels, in a ball of yarn / The devil collects it with a grin / Our love in a ball of yarn / He’ll never return it / So when you come back we’ll have to make new love.’ That’s the lyrics to the whole song. My entire life I’ve been in relationships where I’ve been far away from someone, and I’m obviously still in a long distance relationship now with Hayley [Williams]. We’ll go on tour and not see each other for three months, and then when you come back there’s sort of this period where you fall back in love with each other. You’re still the same people, but you haven’t lived together for three months and you’ve both grown individually, so when you get back together it’s like this whole new growing together period and it’s awesome. It’s like falling in love all over again, and the lyrics to Unravel are the perfect description of that.

**5. AURORA **(Vespertine, 2001) From what I understand this song is just about a glacier that she loved in Iceland. Lyrically I don’t have so much of a connection with it, but the melody is just insane. It reminds me of like an old church hymn or something like that. And the vocals are so emotional. It’s one of my favourite Björk songs. She’s always been such an earthly artist, and she manages to relate her emotions to her environment so beautifully.

**4. HUMAN BEHAVIOUR **(Debut, 1993) This was probably her first solo hit. By the way this is just my top ten Björk songs: I have a whole list of The Sugarcubes songs too. I was a big Sugarcubes fan before Björk, but this was the first solo Björk song that I heard. I remember the video came on MTV and I was like, ‘Woah! That looks like that girl from The Sugarcubes’, because back then you obviously couldn’t just go on the internet and find out. It blew my mind, and I was a huge Bjork fan from that moment. It was so much more than just music: it was the whole package. It was so creative and expressive. I think we all sometimes feel what she describes in the lyrics, too. It’s so perfect. Like, why do people do the things that they do? Sometimes human behavior just doesn’t make sense.

**3. POSSIBLY MAYBE **(Post, 1995) Man, this song is killer. It’s not a song with a massive chorus or anything, but what’s so special about it is the long verses that go through the various stages of confusion that run through our heads: like the way we play out every sort of scenario in our minds, and the ways in which they often paint a worse or lesser picture than the reality. It’s a song about anxiety and fear, and not letting those things ruin your life. And Post is definitely the best Björk album in my opinion. It’s the perfect rollercoaster, and there’s a little bit of everything in there. I even have the pink flower logo from Post tattooed on my forearm.

2. JOGA (Homogenic, 1997) Back when MCA Records was still around I was working on a Björk tribute album, and New Found Glory recorded a version of Jóga for inclusion on it. In the lyrics she sings, ‘State of emergency / Is where I want to be’, and I think what she’s saying is when you’re most vulnerable with someone is when you’re closet to that person. She really understands and is able to write a song that completely explains how deep and connected we become when we allow ourselves to become vulnerable in front of someone that you love. This is one of her perfect songs too. When she wants to Bjork can write and record the perfect song. Even when she’s being abstract with the production, she can still deliver intense emotion and a catchy melody at the same time.

**1. HYPERBALLAD **(Post, 1997) Those lyrics, on a personal level, speak to me so clearly. I think what she’s saying – and this is just what I get and it’s not to say this is what the song is necessarily about – is that she sees how lucky she is to have all these things, but at the same time you can forget how disposable and meaningless it all really is. For me it’s like her personal sacrifice, where she throws all these things off the cliff to remind herself that these things are disposable. She’s reminding herself of the things that really matter, and why she’s doing the things that she’s doing. And she really knows how to write a song and have the music reflect what’s happening in the lyrics. When the beat kicks in with Hyperballad it’s not because it’s time for a big finale; it kicks in because there’s a purpose and a deeper meaning behind what she’s singing, and it’s so impactful.

Chad Gilbert was speaking to Matt Stocks. New Found Glory play the UK August 24-29, including slots at the Reading and Leeds festivals.