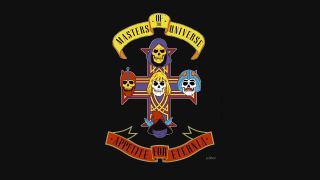 Last week, it seems that many Guns N’ Roses fans were forced to re-mortgage their homes to get tickets for the band’s Not In This Lifetime tour. Some, we imagine, sought the services of a backstreet surgeon and flogged their kidneys on the Internet to get the chance to see Slash and Duff stand alongside Axl as he repeatedly demands some reggae during their cover of Knockin’ On Heaven’s Door.

To help heal those financial wounds, here are 10 sometimes mean-spirited Guns N’ Roses memes. Check them out now before Axl demands that the entire internet is set on fire and pushed off a cliff.

Let’s get the cruel Guns N’ Roses memes out of the way first. Alright, Axl may no longer be the snake-hipped hellraiser he was two decades ago. But he’s 54, for fuck’s sake. Even Iggy Pop sags in a certain light. It’s just nature’s cruel trick on us all. Besides, we’ve all been victims of the camera lens’ cruel glare. When this photo originally did the rounds, you couldn’t move for food-related puns. This was one of the more common ones, alongside ‘Welcome to the jungle, we’ve got tons of cake’. They’re just mean. Funny, though.

It didn’t stop at fast food references, oh no. Some bright spark suggested that the Guns N’ Roses frontman looked a bit like the chunky martial arts expert Rufus from Street Fighter. We’ve seen videos of Axl jumping in the crowd and offering selected fans a sample of his five knuckle sandwich buffet, so maybe that’s where they got it from.

Tardar Sauce, the permanently miserable pet known globally as ‘Grumpy Cat’ hasn’t appeared in our weekly meme round-up as much as we’ve liked. Here, we’re righting that wrong with a meme that suggests that he’s threatening to shoot someone to death. Oh, Grumpy Cat.

A round of virtual applause must go to Joey Spiotto, who rounded up the Masters of the Universe crew and reimagined them as Guns N’ Roses on the alternate cover of their 1987 debut album. Slash, for instance, has been replaced at the bottom of the cross by levitating comic relief Orko. We’re not sure why, though.

Here’s a reversed virgule joke for all the computer programmers out there. Not au fait with writing computer commands? Pass this onto that quiet mate who is. They’ll piss themselves. Quietly.

When the Guns N’Roses reunion rumours were getting hotter than a Carolina Reaper pepper in cut-off denim shorts, we can only imagine that original drummer Steven Adler was sitting staring at his phone hoping for that call. Sure, he’s made guest appearances, but right now, that drum stool is occupied by Frank Ferrer. His nickname is Thunderchucker, due to his ability to throw brontide across the stormy skies. This is purely a guess, to be honest.

That Moses chap really looks like Taylor from Planet Of The Apes. I mean, the likeness is uncanny. Moses, as we all know began his career in Bay Area thrashers Exodus. [Really? Can we check this before posting? – Bible Ed.]

When Axl joined AC/DC to help the band complete their world tour commitments, we noticed the sheer volume of negative memes directed at the singer. We tried to redress the balance in June by creating a handful of positive messages for him, like the one below where it looks like he’s on the toilet. We think it worked.

Here’s the Ridiculously Photogenic Metalhead making his debut appearance on TeamRock. The creator of these memes seems to be labouring under the assumption that having a handsome face, lustrous hair and the ability to point at a camera makes him somehow irresistible to everyone with functioning eyes. But would this chap’s looks help coax Axl from his dressing room to play the gig on time? Come on, he might be a Ridiculously Photogenic Metalhead, but he’s not a magician.

See? This meme is so on the money, its name should be Benjamin Franklin. Or Sir Winston Churchill. If you’re not reading this in the US or the UK, simply add the name of someone whose portrait appears on your national currency. Jokes for everyone.

Guns N' Roses Quiz: how well do you know Appetite For Destruction?