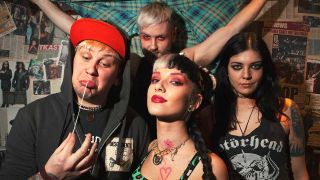 Like many bands, UK alt-rockers Hands Off Gretel began 2019 with a cloud of uncertainty looming over their heads. Having funded their upcoming album, the grunge-tinged (and two time Tracks Of The Week-winning) I Want The World via a Pledge campaign, news that the company were struggling to fulfil payments to bands with active campaigns threw their album release into turmoil.

But, in true Gretel fashion, the band came back fighting – with a self-funded push that saw them wrap the album in the nick of time for its March 29 release date.

To celebrate the album's release, we recruited vocalist and grunge fanatic Lauren Tate to handpick a playlist of undeniable grunge anthems to usher in the release of what might just become a modern grunge classic.

Sean my guitarist introduced me to Alice In Chains. I think Layne Staley was by far the best singer in the 90s. His vocal tone always makes my hairs stand on end. I was so inspired by the harmonies and vocal layers in Dirt, for sure one of my favourite albums ever.

Nobody in the 90s sang like Kat. She was the coolest, most crazy singer I’d ever heard. My dad was shouting up at my room telling me turn it off: “It sounds like someone is in bloody labour,” he’d say… Which obviously made it even cooler.

Rebel Girl was my anthem for a long time. I think every rock chic has their Bikini Kill era where they rock out with the hairbrush, pigtails in their hair, screaming ‘til their throat hurts. They taught me so much about feminism and my own self-esteem.

Marilyn Manson is my hero. Growing up listening to this made me so happy to not be one of the cool kids. He inspired my look a lot also as I’d experiment with fashion with my music. The aesthetic Manson had was genius.

I first heard L7 on the film Natural Born Killers. My hairs stood on end; I couldn’t believe I’d never heard of them. I was hooked! The dirty riffs and the female rage were just so addictive and inspiring to me.

I remember thinking Gwen was the coolest woman alive. Her stage persona and style were everything. I’d rock out to Just A Girl in my room, looking at myself in the mirror, feeling like I was in my own music video.

I found The Gits on YouTube. I remember how excited I was listening to their music for the first time only to find out the singer Mia Zapata was killed years back. Always makes me so sad listening to her voice, we lost a star.

This is my jam! Finding Nirvana during secondary school made me so hungry to be in a band. Kurt inspired me to pick up the guitar and front a band for sure.

This was the soundtrack to my teen years, I was very late to the Hole bandwagon. I wanted to find a female Kurt Cobain and when I found her I’ll be honest, I didn’t listen to Nirvana for a while after that. I was hooked on Courtney!

I heard this album when I was 16. Sean my guitarist gave it me to listen to while I painted in the garden, he was so happy I liked it. The fuzz tone was everything; I wanted to steal that sound so bad.

Hands Off Gretel's new album I Want The World will be released on March 29 via Puke Pop Records. Catch the band on tour at one of the dates below: