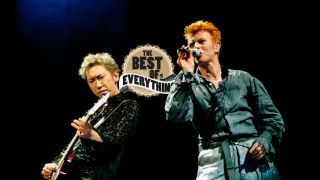 Ever since I was a teenager starting out with a guitar, David Bowie is the artist who has influenced me the most. All the guitarists he chose to work with were unique and truly innovative and it had always been a dream of mine to play guitar next to him. And in 1996, that dream came true. He’s a gentleman and highly intelligent, he’s a wonderful person who continues to be a great inspiration.

STAY (Station To Station, 1976) Station to Station is the first David Bowie album that I ever listened to. As a 14-year old aspiring guitarist back in my hometown in Japan, I spent hours practicing this song’s funky intro over and over again. I had always thought it was played by Carlos Alomar, but just recently I was surprised to hear from one of Bowie’s band members that it was actually played by Earl Slick.

BREAKING GLASS (Low, 1977) I love the heavy and dark view of the world in Bowie’s Berlin era. No matter how many times I listen to this, the syncopated drum and bass in the guitar riff is always thrilling. Even now there are moments when I hear this riff being played and recognise it immediately.

GOLDEN YEARS (Station To Station, 1976) Along with Stay, this song also has the impact of dry, funk guitar. The appeal of guitar is not just about power chords and solos – guitar as a rhythm instrument has an ageless and timeless ability to make people dance.

REBEL REBEL (Diamond Dogs, 1974) This is a riff that everyone hears one time and immediately will want to copy, but actually it’s very difficult to play. Playing while rhythmically muting the arpeggio sound is not a simple thing.

MOONAGE DAYDREAM (The Rise and Fall of Ziggy Stardust and the Spiders From Mars, 1972) When you can hear one bar and recognise a song from its intro, it’s a true masterpiece. In the past, there wasn’t such an abundance of guitar effects, so distortion came from tuning the guitar and amp in such a way until it produced a sound of air vibrating. I think everyone would agree that Mick Ronson was the coolest ever person to share the stage with David Bowie.

FASHION (Scary Monsters (and Super Creeps), 1980) Taking advantage of the personalities and talents of three guitarists who greatly influenced me – Carlos Alomar, Robert Fripp, and G.E. Smith – this song produced a very avant-garde riff. Seeing Adrian Belew play this live was amazing, as his performance really changes the concept of live guitar. It’s also well known that Bowie scouted the previously unknown Stevie Ray Vaughan. He has a talent for selecting incredibly talented guitarists, and this includes Reeves Gabrels, who is a good friend of mine.

THE JEAN GENIE (Aladdin Sane, 1973) Although this is a simple single chord riff, it’s important to hammer on a G# and pull off at the sound of the fourth beat G. The solo carving just one sound into the rhythm is really impressive.

SUFFRAGETTE CITY (The Rise and Fall of Ziggy Stardust and the Spiders From Mars, 1972) My friends and I played this song at our hometown’s high school festival. The choking sound of the guitar right at the beginning is really fantastic. In high school, I longed for the tone of Mick Ronson’s Les Paul so I played one, too. I don’t own any now.

ZIGGY STARDUST (The Rise and Fall of Ziggy Stardust and the Spiders From Mars, 1972) This song also is recognisable right from the start – it’s a fantastic intro. Mick Ronson was great at making riffs by combining power chords and arpeggios. You could bet it was composed on an acoustic guitar, right?

DIAMOND DOGS (Diamond Dogs, 1974) When first starting out as a guitar novice, I didn’t even know about the existence of the bottleneck, so I couldn’t imagine how you could get the sound of the slide in this intro. At that time, we didn’t have YouTube or DVDs, so all you could do was listen to the record over and over again, taking in the sound from the speakers to your ears and trying to find the positioning and chords for yourself. YouTube is a very useful thing. I spent so much time in my youth listening and trying to understand so many different types of wonderful music, so as a professional musician, it has really given me a strength that I’m grateful for.

Hotei was speaking to Matt Stocks. His new single, How The Cookie Crumbles (featuring Iggy Pop) is out now. For more information, visit his official website.