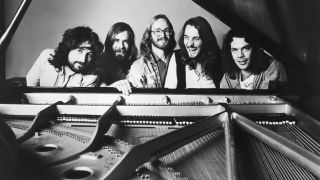 In 1979 AD, the geeks inherited the Earth. It was the year in which The Clash released London Calling, widely acclaimed as one of the most influential rock albums of all time. But it was another English rock group – one that was the very antithesis of The Clash’s last-gang-in-town cool – that dominated the charts on both sides of the Atlantic.

Supertramp were one of the geekiest band of that time – or any other. Four of the five band members had beards; their co-leader Roger Hodgson sang at chipmunk frequency; their scholarly soft rock was lovingly crafted in complete denial of the punk explosion of two years earlier. But in commercial terms Supertramp murdered The Clash, their 1979 album Breakfast In America selling four million copies in the USA to London Calling’s two million.

Breakfast In America was the pinnacle of Supertramp’s career. But it was no overnight success.

Supertramp formed in London in 1969 after Hodgson answered an ad in Melody Maker by vocalist/keyboard player Rick Davies (it promised: ‘Genuine opportunity!’). They took their name from WH Davies’s vagabond journal The Autobiography Of A Super-Tramp, they were bankrolled by Dutch millionaire Stanley Miesegaes and they were one of the first acts signed to the A&M label. But when their first two albums tanked, Miesegaes pulled the plug and Supertramp were reduced to just Hodgson and Davies.

Nevertheless, the pair vowed to carry on, and with a new line-up (including bassist Dougie Thomson, saxophonist John Helliwell and American drummer Bob Siebenberg, aka Bob C Benberg) they recorded a third album, Crime Of The Century. It reached No.4 in the UK in 1974 and established Supertramp as one of Britain’s leading progressive rock groups.

In the late 70s the band relocated to the US. The move paid off handsomely when the FM radio-friendly Breakfast In America topped the chart there for six weeks. But in the wake of that success the relationship between Hodgson and Davies broke down, and after one more album, prophetically titled Famous Last Words, Hodgson quit.

Since then, Davies has recorded four studio albums with various line-ups of Supertramp, and Hodgson has worked as a solo artist, but neither men has matched what they once achieved together.

Meticulously recorded over eight months in LA, the album has darkness beneath its surface gloss. Goodbye Stranger was perhaps the most cynical song ever written about love, The Logical Song an existential crisis set to the most beautiful melody. And the tongue-in-cheek title track, written by a teenaged Hodgson, was a peculiarly English take on the American Dream.

The album that saved Supertramp’s career was recorded by a band in turmoil, abandoned by their rich patron, all but forgotten by their record company, and with a new line-up. But Hodgson remembers the making of it as “a magical period”.

With Crime… Supertramp defined their signature sound and created a progressive rock masterpiece. Each track was a classic in its own right, and with Hodgson and Davies in deeply philosophical mood, the album had an intellectual weight to match the best of Pink Floyd. Moreover, it had one shining pop song, Dreamer, that gave the band their first Top 20 hit.

The first Supertramp album to go gold in the US, Even In The Quietest Moments… put the band back on track after a slight wobble with Crisis? What Crisis?

It was recorded at Caribou Ranch Studio set in the Rocky Mountains: the perfect backdrop for that famous cover shot of a snow-laden grand piano.

Give A Little Bit was the key to this album’s success, hitting the US top 20 and preparing the way for Breakfast In America to follow. But Supertramp remained a progressive rock band at heart, as evidenced by the 11-minute, quasi-religious Fool’s Overture.

Crisis? What Crisis? was nowhere near as popular as predecessor Crime Of The Century, but it was still a strong album (and it made the UK Top 20).

Newly based in America, the band recorded in LA. And it showed. In contrast to the heavy atmosphere of Crime…, this album had a lighter, more relaxed feel typified by the funky rock of Another Man’s Woman and the playful pop of Lady.

There are fine songs throughout, notably Sister Moonshine and A Soapbox Opera. But with no hit single on it, this remains the most overlooked album of Supertramp’s golden era.

After the huge success of Breakfast In America, and a punishing world tour, Supertramp were burned out and Hodgson and Davies had grown apart. Hodgson was the one who walked, leaving Davies to preside over Supertramp’s slow demise.

Not so. Certainly it was no Breakfast In America, and it sold just 500,000 in the US, but there were flashes of the old brilliance in Crazy, Know Who You Are, and especially It’s Raining Again, the last great Supertramp single.

After the split it was Hodgson who made the better record. And he recorded this solo debut almost entirely alone.

Evidently, he relished his new found independence. He sounded almost bullish on Had A Dream (Sleeping With The Enemy), and exultant on Give Me Love, Give Me Life.

Melodic yet adventurous, the album was a masterful blend of pop and progressive rock, peaking with the Floyd-esque Only Because Of You. But sales were disappointing; in the UK it peaked at No.70. Hodgson had better songs, but Rick Davies had that all-important brand name.

There was a triumphal air to this double live album recorded in the French capital in 1979 during the Breakfast In America tour.

As manager David Margereson said in the sleeve notes: “Ah, Paris! The first time we were here, at the tiny Bataclan Theatre, only eight people paid to get in…” This time 8,000 roared their approval as Supertramp confirmed their big-league status with a consummate performance.

Hodgson and Davies might have been kidding themselves when they proclaimed these live tracks better than the original studio versions: Hodgson strains to hit the highest notes, but Paris is a fine, richly atmospheric live album by a band at its peak.

With Hodgson gone, Supertramp continued with the rest of the line-up that had been together since Crime Of The Century. But Davies was running the show, writing all the music and lyrics on an album that proved the band could still function without the guy who’s written all the hits.

Brother Where You Bound was only moderately successful. But, more importantly, for Davies in particular, it was identifiably a Supertramp album. The title track was 16 minutes of complex, paranoid prog rock, a throwback to Crime…, featuring guest guitarists David Gilmour and Scott Gorham. But without Hodgson there was no hit single.

Any list of the worst album covers of all time will probably include Supertramp’s second, Indelibly Stamped, featuring the naked torso of “England’s most tattooed woman”, Rusty Skuse. The cover of the band’s debut album (a dire, hippie vision of Man as flower) wasn’t much better. Both albums flopped, but they retain a quaint period charm with a blend of groovy, faintly psychedelic rock and Simon & Garfunkel-style pop.

The debut album is marginally the stronger of the two, with a handful of finely crafted songs in Surely, Words Unspoken and Shadow Song. But it would be four long years until Supertramp really found their voice with Crime…

Supertramp never made a classic album without Roger Hodgson, and with Free As A Bird the band reached its nadir.

Assisted by Crowded House guitarist/vocalist Mark Hart, Rick Davies steered Supertramp into the very middle of the road on an album of bland, 80s adult rock.

In a truly bizarre turn of events, one of the tracks, I’m Beggin’ You, hit No.1 in the US dance chart. But the album still bombed.

Six years later Davies and Hodgson attempted reconciliation, but they couldn’t make it work. And although Davies would continue using the Supertramp name, he was fooling no one. Without Hodgson it just ain’t Supertramp.

To read more on Supertramp’s seminal live performance in Paris in 1979, then click on the link below.