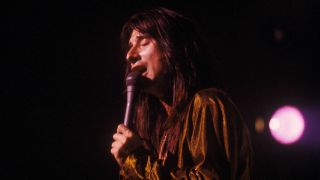 Wheel In The Sky’s epic bombast provided a template from which future creative diamonds would emerge, forever cementing Journey’s appeal and securing Perry’s place in rock’s vocal Hall Of fame.

The choice of producer for Infinity was inspired. Band, management and label all agreed on Roy Thomas Baker, the flamboyant British studio craftsman who had worked with some of the most influential bands around, including Free and – most importantly – Queen.

“What Roy gave us was the opportunity to try different textures and ideas,” Perry recalls, “but the foundational aspect of the songs and the arrangements were done. Roy really gave us a direction, and from there the band found itself.”

Wheel In the Sky had been written with previous vocalist Robert Fleishman, prior to Perry joining Journey. The song had started out as a poem called Wheels In My Mind by Diane Valory, the wife of Journey bassist Ross Valory. Fleischman wrote new lyrics and guitarist Neal Schon composed the melody on acoustic guitar in the back seat of a station wagon while the band were on the road between shows.

Perry explains: “They already had Wheel In The Sky in the bag but the way they had done it with Robert was different from how I was going to interpret it.

“When it came time for me to do that track we had moved studio from San Francisco to Los Angeles. So I said to Roy: ‘What do you think, shall I try something else?’ Roy said [adopts a Monty Pythonesque accent]: ‘Well, I don’t know, I’m not the singer, am I?’

“I sang real high falsetto notes with echo in the background while Neal was playing a beautiful solo. Roy spent hours with Neal doing what we called violin guitars – root notes, holding stuff, harmonies, doubling, sustaining and providing a thick texture to it all. Roy used to say [again, in perfect Pythonese]: ‘Here we go, dubbly-wubberly, tripply-wibbly.’”

Bruce Lundvall, who was the President of Journey’s record label, Columbia, at the time, quipped that in order for the band to make another record with Perry singing, Infinity would have to sell one million units.

“That was the reason we stayed on the road for 298 shows that year,” says Perry. “We started touring in February and didn’t come home for almost a year.

“I remember clearly Wheel In The Sky being the first single. Neal and I went to this pizza place, and I went over to the jukebox and saw a Wheel In the Sky vinyl 45 in the machine – an ecstatic feeling.

“I didn’t tell Neal, I just put two quarters in, pushed the button and sat down, and the song started. Neal looked at me and started laughing. It was a monumental moment. Back then if you were started to show up in jukeboxes it was a sign that you might be finally starting to happen.”

Wheel In The Sky reached No.57 on the Billboard listings in 1978, becoming Journey’s first song to chart on the Hot 100.

Parent album Infinity went platinum three times over – and Steve Perry got to make that next record.