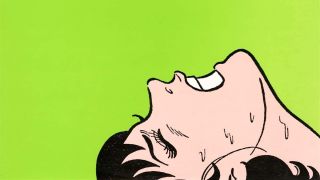 Pick an alternative album you’ve liked in the last 30 years and chances are Steve Albini will have had something to do with it. From Nirvana to Pixies to Bush to The Jesus Lizard, some of alternative's biggest albums have been nursed into life by Albini's production.

But he's never been one for status and the A-listers Albini has brushed up against have been happy accidents rather than anything he achieved by design. In reality, he's always been more interested in the scene's underdogs – those doing something interesting, innovative and, most likely, absolutely not commercially viable. It's not so much that everything he touches turns to gold; more that it grows a layer of gunk beneath its fingernails and heads for the nearest dirge-ridden shadow to make more of a racket than you ever imagined possible.

It makes sense, given this history, that Albini is still the go-to wishlist name for young alternative artists hoping to make an impression in an ever-more-cluttered scene. As much was certainly the case for UK alt-rockers Asylums, who headed to Albini's Chicago studio to record their third album, Genetic Cabaret, under his watchful gaze. An album that doesn't flinch from the horrors of the modern world, turns out it was a partnership that proved prescient for its mid-pandemic release.

To celebrate the release of this Albini-approved endeavour, Asylums vocalist Luke Branch and guitarist Jazz Miell talk us through the finest albums from the super-producer's extensive extended universe.

Luke Branch: "This record left such an impression on me when I first heard it as a teenager. The lyrical imagery and vocal anguish is so otherworldly and works beautifully with the band's three-piece music that is so lean and dynamic. It’s the record that got me really into PJ Harvey and also made me fall even more in love with Steve’s recording style. The ambience and emotions captured on this record still sound as fresh as ever."

LB: "Towards the end of my teens I became an eager record collector and would get the train to London and empty my pockets in various record shops. I had heard of Shellac and Big Black but hadn’t been able to find their albums in Southend. I eventually bought everything Big Black had recorded in one day around that period and really got into their sound. Steve’s unique guitar playing, voice, lyrical themes, the drum machine sound and artwork all really drew me in. There is so much to love about this album – not least the florescent green and pink cover which we borrowed as a colour scheme for our debut album Killer Brain Waves."

LB: "I couldn’t ignore this one. The second album I ever owned, I bought it when I was 12, shortly after being introduced to rock music after a friend's dad lent me Electric Ladyland.

"The album was so influential on me that I started playing guitar and writing songs. Even though I probably have hundreds of Steve Albini recorded albums I still go back to this from time to time and love it. The attitude of the band and the sound of the recording are perfectly matched. Radio Friendly Unit Shifter and Dumb can still induce a surge of adrenaline and melancholy in me faster than checking my bank statements."

LB: "For me this record is a bit of a lost classic. It came out about 10 years ago and was pretty out of step with what was happening in music at the time. I was so intrigued to hear what Jarvis and Steve sounded like working together that I bought the album without hearing a single or anything. It’s got this great late 70s feel, loads of post-punk influence. Bits of it are reminiscent of Elvis Costello and Swell Maps but it all has – as you would expect – Steve's wonderful, abrasive realness which is fun paired with JC’s on-record persona."

LB: "I have always loved instrumental music, from John Coltrane and Bill Evans to Glenn Branca and Neu. I got pretty heavily into post-rock for a while and this record really excited me. I had been a fan of Mogwai’s first three albums, and if memory serves this came out towards the end of their Rock Action period [it was actually released as a companion piece to the album - Ed]. Just like with the Jarvis album, I was excited to hear how they sounded with Steve’s recording style and I wasn’t disappointed. This 20-minute single is a favourite of mine before going on stage."

Jazz Miell: "This is as good as debut albums get. Everything that would define the Pixies sound for the rest of their career is here from the opening track and Steve caught that sound at its most raw. The drums that open Bone Machine are still some of the most exciting I’ve ever heard on a record, Black Francis’ fierce, distorted vocal on Something Against You, Joey Santiago’s guitar sound and stabs on River Euphrates and of course Kim Deal’s bass and vocals on Gigantic."

JM: "I listened to this album a lot in the months leading up to our recording session at Electrical Audio and most of the plane journey to Chicago. Cloud Nothings are a truly underrated band and this is one of their finest offerings. There’s something about their sound that always makes me feel nostalgic – maybe it’s the nod to early 00s emo. I love Wasted Days and Stay Useless from this album."

JM: "Our frontman Luke got me into METZ when we first started Asylums, their first album had just dropped on Sub Pop and we both adored it. We were lucky enough to see them at a sweaty, sold-out show at the 100 Club in London on their second album tour. Strange Peace sees METZ at their heaviest and most visceral, songs like Drained Lake and Mr Plague really influenced the heavier side of our music during the writing process. We all frequently watched their studio diary on YouTube before making our record at Electrical Audio, it really inspired us all as they had recorded the majority of the album live in a matter of days."

JM: "This is one of my all time favourite Manics records. The lyrics are all words left by Richey Edwards and are some of his most comedic and profound out of all their albums. The Richey Edwards lyrics and Jenny Saville artwork have led the album to be described as the follow up to The Holy Bible and I think it serves as a sister album to that record very well. Me And Stephen Hawking is one of my favourite riffs and has some of Richey’s greatest lyrics."

JM: "This album was made up of songs recorded for the In The Belly Of The Brazen Bull sessions, of which Steve recorded the track Chi-Town and which they recorded live with no overdubs in a matter of days. I’ve seen The Cribs live a number of times and Steve is the only one who has captured their true live sound on a record. I love the frayed edges and imperfections of this album, songs like Year Of Hate and Dendrophobia really inspired me before we entered the studio."

Asylums' new album, Genetic Cabaret, is available now via Cool Thing Records. Check it out below: