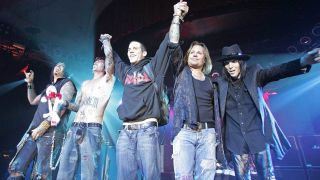 Mötley Crüe have been enjoying an unprecedented upswing in popularity since the release of their much-anticipated biopic The Dirt earlier this year. Directed by Jeff Tremaine – better known as the twisted mind who successfully brought Jackass to our screens – we thought it only right that we hunt down another of the show's alumnus in the form of Seaworld-taunting scrotum-stapler Steve-O, to revisit his legendary odyssey to meet the band on their 1987 Girls, Girls, Girls tour.

A dyed-in-the-wool, card-carrying metalhead since his early years, Steve-O credits Mötley Crüe among the three bands that first summoned him to the iron-plated altar of heavy metal, telling us, “The first metal album I bought was The Number Of The Beast, by Iron Maiden. Listening to that album taught me that I was a metalhead. It was that simple. About a year later I got my first Mötley Crüe album, which was Shout At The Devil, and pretty quickly I caught on to what they were all about. They were so candid about ‘sleaze,’ as they called it — that celebration of sex, drugs and rock and roll. So at age eleven, Mötley Crüe taught me why I was a metalhead. About a year after that, I got my first Slayer album, Reign In Blood. So I had learned that I was a metalhead from Iron Maiden and I learned why I was a metalhead from Mötley Crüe but Slayer taught me just how bad the situation really was!”

Growing up on the frosty tundra of Toronto in the late-80s, Steve-O cultivated a seismic obsession with Mötley Crüe that expanded with feverish momentum, reaching a tipping point on the band’s sixth anniversary. “On January 17, 1987,” Steve-O explains, “I sent a letter to their fan mail department. Like, creepy, cut-out-the-letters-from-magazines-and-glue-them-to-the-page-type stuff. This was the sixth anniversary of Mötley Crüe and I glued these letters and said ‘Happy Sixxth Anniversary’ and I mailed it to their fan people.”

But it was the television news on October 24, 1987 that would kick off a fantastical chain of events that would bring the upstart metalhead toe-to-toe with his real life rock and roll fantasy. TV reporters had interviewed a gaggle of irate Canadians protesting the arrival of Mötley Crüe in their genteel, hockey-loving metropolis. Steve-O happened to be watching and instantly sussed the opportunity. “I was like, They’re here and the concert’s tomorrow! Which means they’re in one of the hotels here! I knew all their real names — like Nikki Sixx is Frank Carlton Feranna, Vince Neil is Vincent Neil Wharton — and I remember thinking, these guys aren’t going to check in under their stage names. I thought about it a ton and I figured that they’d check into the hotel under their manager’s name, so I ran to my room and checked every tape sleeve from ever Mötley Crüe cassette and every one listed the same manager, which is of course, Doc McGhee.”

In a monumental testament to perseverance, he tore into his kitchen, pulled out the phonebook, and rifled through the yellow pages. Steve-O discusses the moment with the joyful, wild-eyed fervour as if it has only transpired within the hour. ”I started calling every fucking hotel in Toronto,” he says. “I scratched each one off the list so I wouldn’t miss one. I sat there for a couple hours and finally I get this hotel on the phone and I say what I said to all the other hotels – ‘Please put me through to Doc McGhee’s room.’ And they put me through to this room! I was like, ‘Hey, is this Doc McGhee?’ and the guy says, ‘No, this is Doc’s brother Scott.’ I’m like, ‘As in Mötley Crüe?’ I could tell he was sort of annoyed and he asked how I got the number, so I told him how I called every hotel in the phonebook. He said, “Are you serious? That is awesome!’ Then he said, ‘How would you like if I put you on the list for backstage passes?’ I was like, ‘Fuck yeah!’

“He gave me tickets in the fifth row and backstage passes, so we get to the concert and we’re in the press line with all these people with huge cameras and sure enough the envelope was there with my name on it and I got my picture taken with Tommy Lee and Nikki Sixx backstage.”

None of them could have seen that the journey had only reached a halfway point. “Everything came full circle after Jackass came out,” Steve-O says. “I got arrested on a couple felony charges and I was in a situation where I couldn’t do any drugs because I had to piss clean and everybody was telling me I was in big trouble. So I’m sitting at home by myself, bummed that I couldn’t [party], so I went on Tommy Lee’s website and left a message on his message board, telling him the story of meeting him and telling him my situation. Within a day I got an email from him saying, ‘Tommy Lee here…’ He was like, ‘Dude, you’re in almost as much trouble as I’ve been in!’ Ha ha. It was so rad.” Their bromance in full bloom, in 2003, Tommy would tape an appearance for Steve-O’s autobiographical documentary of his early years called Steve-O: The Early Years.

Their paths would cross again a year later. Years before, in the wake of nasty public infighting, Tommy had left the band and Mötley Crüe went on hiatus as the other members pursued side projects, TV deals and in the case of Mick Mars – total seclusion. But in late-2004, the band reunited and threw a free hometown gig at the Hollywood Palladium to celebrate, inviting Steve-O to play a rather high-profile role. “I got an email from Tommy Lee,” he says, “that said, ‘Call me!’ and it had his home number. I called him and he says, ‘Dude, I’m back in Mötley Crüe, we’ve been rehearsing for awhile and we’re going back on tour with the Carnival Of Sins tour. We’re flying into the Palladium in a helicopter and doing a free concert and I want you to do some fucked up shit onstage and introduce us for the first show back with all the original members.’”

For anyone familiar with Steve-O, it goes without saying that Tommy was still halfway through his pitch before he said yes. “So I went out there and I broke a lightbulb over my head,” he says, “and I slashed my tongue and I bled all over myself and I dipped my finger in the blood and put the lines under my eyes like Nikki Sixx. I put the two diagonal lines on my cheek like Tommy Lee, and then I was like, ‘Ladies and gentlemen, Motley Fucking Crue!’ I came out before they came on and I’ve got blood all over me and they’re doing this interview with Larry King and Tommy’s grabbing me and hugging me and I’m trying to keep the blood off him and he’s like, ‘Fuck that, dude!’ and he grabs me and wipes himself on me and goes out onstage covered in my blood. That was December, 2004. It was pretty full-circle and we’ve been bros ever since. Nikki Sixx, too. Both of those guys have quotes on the cover of my book called Professional Idiot, which is so epic. And for Tommy’s book, Tommyland, he got me to write a little chapter telling the story.”