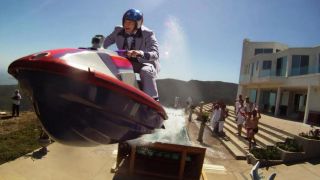 When Jackass hit TV screens in the early 2000s, it quickly propelled its cast of hitherto unknown stuntmen into the big leagues. Hell-bent on self-destruction, Johnny Knoxville and his crew of fearless reprobates became notorious for the wince-inducing injuries they inflicted upon themselves in the name of entertainment. But it wasn’t just show’s cast that found themselves thrown into the limelight; so, too, did the show’s theme tune.

It’s difficult to think of Jackass without also hearing the opening refrain of what has become known, unofficially, as ‘The Jackass Song’. Before its fate soundtracking the hijinks of America’s most notorious pranksters, the song was known simply as punk-rock staple Corona – an upbeat, jangling slice of Latin-infused roots punk lifted from Minutemen’s seminal third album, Double Nickels On The Dime. Despite their now synonymous association, its place alongside Johnny Knoxville’s trail of televisual destruction sits slightly at odds with the song’s origins.

“Corona is very heartfelt,” says former Minutemen bassist Mike Watt. “[Guitarist] D. Boon wrote that one on a trip to Mexico. After all the drinking and the partying, the morning after, there’s a lady picking up bottles, to turn them in to get monies for her babies. It really touched him.”

Tragically, Boon would never learn of the song’s legacy. A year after the album’s release, he was killed in a car accident. The song sparks memories in Watt that he still cherishes. “When I hear that – he plays those motifs, that kind of mariachi, I mean, it’s just everything for me. D. Boon, in that song, it really means a lot. Music was personal with us, it’s how we were together, and then the [punk] movement let us do it in front of people.”

The juxtaposition between the song’s subject matter and its association with Jackass is something Watt acknowledges. “I know it’s used as the theme song for Jackass – people getting tasered in the balls – but it really don’t have things much to do with that. That’s trippy about that; it’s surreal, the connection.” Despite that connection, the show failed to make a fan in Watt. “They sent me the pilot, for approval, and that’s the only one I ever saw, and I couldn’t believe it,” he laughs. “What I liked about it was they were really doing this shit, this was not fake. Yeah, I liked that. But… I couldn’t watch more. They dressed this guy up in like, County Jail clothes, and they put him in a hardware store, asking for a hacksaw. The police come! The Sheriff almost ran the car off onto the sidewalk, and I was like – ‘Okay, I like the reality content here’. After that, I can’t watch that crap, y’know. But that’s why I let them use the song.”

Of course, as soon as Jackass hit MTV – dragging Corona along with it – what had been a relatively low-key project at the time was suddenly thrust into the mainstream. Almost 20 years after the song was written, Watt found himself faced with a generation of new fans. “[Music] goes through all these stages,” he says. “And so, guys experience you through Jackass – you can’t laugh at them too much because, y’know, how else do things get transferred? I got it from a movie – old movies are a huge, huge influence. So, you look at that, and you look at Jackass – it’s still transmitting information to turn people on. You don’t know what the thing is that’s going to bring you in. So with these kids, it was Jackass – okay, so be it.”

“I mean, it gets a little weird,” he counters. “I get asked to do work towards things, and I got asked to play the Hot Topic stage [at an event]. And I was like ‘Wow, D. Boon would like this!’ Then someone told me – ‘you know Hot Topic is a store in the mall where you buy punk clothes?’ – I thought it was literal hot topics! I had no idea about the store.”

Cultural misunderstandings aside, Watt hopes that for some viewers, Corona might have provided a portal into punk. “Whatever gets you there – it’s like the way I try to write songs on the bass – a springboard, launchpad. Now, you take it – what are you going to do with this? Instead of selling someone a clay pot, I’d like to sell them a lump of clay. ‘Now – what are you going to do with this lump of clay?’” he explains. “It’s an enabling thing. And it’s the same thing with the Jackass connection. I’m not asking them to be little Jackass copies, xerox clones or rubber stamps. But listen to D. Boon – he wrote that song about that. Maybe think about it, maybe you’ll write a song, and you’ll be part of something, in a band with your buddy, or a stranger; there’s a million, billion different ways to do it. And I’m interested. Everyone’s got something to teach me, even the guy or girl just starting out.”

A heartfelt song about the struggles of a Mexican mother might not have seemed, on the face of it, a natural calling card for what would become one of the best-known – and most ridiculous – TV shows of the 2000s. But their association proved fortuitous in a way no one could have anticipated when the song was written. “People will come up to me and they call it ‘The Jackass Song’,” says Watt. “But actually this was a way Boon could help his daddy after he got killed. His daddy had emphysema, and from the show, the monies went to help his pop.”

And so from a song inspired by a woman trying to care for her family, eventually, Boon was able to provide for his own. “Right…” Watt pauses. “Isn’t that trippy? All from these guys getting tasered in the balls, or getting put in a Porta Potty that gets tipped upside down. But that’s why I really like Corona. It’s a strange mixture of things, but to me, it’s all the nice things about the Minutemen.”