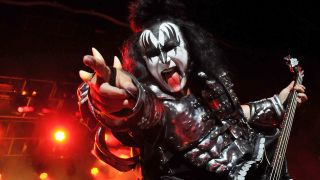 “The most important thing in life is to be a selfish asshole. Do what you want, piss off everyone and stop hanging with the guys because they're not going to get you money or sex.”

“Our idea was to put together the band we never saw onstage: we wanted to be The Beatles on steroids.”

“This ain’t a karaoke act, it’s four warriors standing together: love it or leave it it’s real.”

“What we’ve created is perhaps the four most iconic faces on planet earth.”

“People think Kiss is the same thing as U2 and the Stones, that we get up onstage and play some songs, but they don’t have a fucking clue. The commitment involved to being in Kiss is unmatched by any band in history.”

“To those who said we sold out a long time ago, you’re goddamn right we did. We sell out every single night.”

“If the 1 percent didn’t exist, there would be chaos and the American economy would drop dead. Try being nice to rich people. I don’t remember the last poor person who gave me a job.”

“Rockers are idiots. If strapping a guitar around their neck hadn’t worked out, thanks to the grace of god, they’d be putting on an apron and asking the person next to them if they’d like fries with that.”

“Fame is important, but to be rich is more important.”

“I admire bands like Radiohead, but the idea of being that serious? Fuck that, get up on stage and blow shit up.”

“My life in Kiss is like being a girl with huge tits. All anyone talks about is the makeup, or ‘Let me see your tongue.’ Sometimes you want to say, ‘Can’t you just focus your eyes up here so that we can have a conversation?‘”

“Women are from Mars, men have a penis.”

“Our strength comes from the masses, not from the critics. We’re intrinsically an American band. We’re like McDonald’s, billions served.”

“I’ll paint the clichéd picture of Gene Simmons from far away for you: onstage he’s The Demon, he shits fire and eats kids, offstage he’s arrogant and self-absorbed, a businessman who only cares about money and fucking chicks. And I’d say predominantly that’s true…”

“Kiss is bigger than any one of us, and the idea and the ideal, is going to continue after we’re not in the band.”

“Kiss has never looked over its shoulder to see who liked us and who doesn’t. Not everyone liked Jesus, either.”