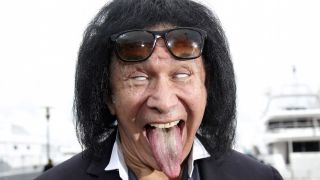 Gene Simmons, it’s fair to say, can be one hell of a dick sometimes.

You don’t have to look far for a statement from the Kiss bassist that hovers somewhere between crudely controversial and outright offensive. Here are just a handful of the God Of Thunder’s pearls of wisdom:

“Try being nice to rich people. I don’t remember the last poor person who gave me a job.” (on money)

“Men don’t care about women’s jobs. They care if she has a big set of jugs and a nice ass.” (on the opposite sex)

Now, around 80 per cent of things he says, I disagree with. If he was driving a cab I was in, pronouncing loudly and offensively on subjects he had little personal expertise on, I’d probably put a big pair of headphones on, or make a pressing request to be dropped at the end of the street, please.

But Gene Simmons is not a taxi driver. He is a rock star, and as such, broadcasting polarising, controversial opinions is a key part of his job description.

So when I heard he had earned the opprobrium of millions of offence-hungry shockaholics by sharing his opinion about the tragic death of Prince with Newseek, I wasn’t too fussed. “His drugs killed him,” said Gene, a man who has spent his much of his life pouring scorn on people who use drugs. “What do you think, he died from a cold?”

I may have disagreed with his ill-informed attempt to draw conclusions about the death of a much-loved artist based on the kind of gossip stories that he of all people should know are factually suspect, but I staunchly defend his right to say them.

That’s not just due to any high-falutin’ moral stance – although I can’t see what’s not to like about free speech – but because I like my rock stars to ruffle a few feathers, to say the unsayable, and to generally not give a flying fuck what anybody thinks. Rock’n’roll should be outlaw music, made by non-conformists, mavericks, misfits and rebels. And while in many ways you could argue that Kiss’s music is highly conformist, conservative and safe, at least the God of Thunder isn’t afraid to cause a storm now and again, and if it pisses a few people off, so be it.

In a culture that is simultaneously more controversy-hungry, yet more perpetually, pathetically outraged than ever before, there’s a lot to be said for rubbing a few people up the wrong way. They are, near enough, asking for it.

Not long ago I interviewed former Mötley Crüe bassist Nikki Sixx for Classic Rock, who spent a good part of his interview ranting about an unnamed ‘balding, rich ex-rock star” who had pronounced that “rock is dead”. A quick google revealed that the target of his ire was Simmons, who had said something along those lines when promoting his new radio station in the States.

I happened to side with Sixx more than Simmons on the topic in question, but thank God Gene bothered to actually say it, because it triggered a debate that needed to be brought out into the open. And frankly, why didn’t Sixx actually name Gene when he was gobbing off? What was he scared of?

It’s bad enough when musicians are given media training and taught that it’s cool to hold your counsel, lest you cause unwanted tabloid attention, upset your Mum or, god forbid, slag off a fellow musician who you might end up bumping into at the MTV Video Awards. Even the most supposedly anarchic, untamed musicians often stop short of airing their true opinions about their contemporaries in public.

And it’s a sad state of affairs when an opinionated, finger-pointing song such is more likely to be written by a rapper than a rocker these days. The hip-hop community aren’t scared of telling it like (they think) it is – how come rock has become so reticent?

Maybe that’s why Gene has seemed to step up the gobshite side of his public persona in recent years – just look at that list of pronouncements. But he also knows how to market himself. I mean, clearly, a man who spits blood on stage every night is probably vaguely aware of the power of shock tactics in showbiz, and his recent reality TV appearances suggest he’s keen to promote Brand Simmons by any means necessary.

Then again, maybe he’s just always been a little out of step with the contemporary consensus. Lest we forget, when Spinal Tap came out in the early 1980s, he was one of the few heavy rock musicians to admit, ‘It’s making fun of the music I love, and I don’t like it’. Something quite a few of his contemporaries probably thought but didn’t dare admit lest they be accused of being unable to take a joke. For that, in a way you have to admire his bravery.

But Gene’s now a lone wolf even in his own band. After Gene’s comments on Prince became public, Paul Stanley quickly snapped into line with the 21st century celebrity’s automatic response in the age of the Twitterstorm, when anyone saying anything remotely upsetting to anyone is chased high and low with the internet equivalent of flaming pitchforks and forced to resign from their entire lives and be exiled to St Helena, or maybe local radio. “Embarrassed by cold clueless statements about Prince’s death,” Stanley tweeted. “Without the facts, better to say nothing.”

Balls! Stanley of all people should know we invest in rock stars to entertain us, and to hell with the consequences. Quite apart from the lack of loyalty, which Gene’s better half, actress Shannon Tweed, later took him up on, lighten up, mate! I don’t read interviews with my favourite rock musicians to hear sober, reasoned, balanced musings on the issues of the day. I don’t even have to like them. I wouldn’t necessarily want them running the country, teaching my kids or serving me coffee. I want them to ENTERTAIN ME.

So it’s horses for courses. When Keith Richards talks about how he snorted his Dad’s ashes, you think, “Good attitude, Keef!” and give Jumpin’ Jack Flash another spin. That’s because he’s a rock star. If he was your local fishmonger and you were just in the process of ordering a pound of hake from him, and he happened to mention how he’d celebrated his father’s recent passing, you’d probably never buy fish from him again.

Thankfully rock stars’ job is partly to upset the apple cart of polite society, which is one reason why Keef has found his true calling in life, and the world is a better place for it. In some cases, we even cherish musicians’ expertise at this role more than their current musical output. Noel Gallagher insults his fellow rock luminaries in every interview and says they can’t write songs, when he hasn’t made a consistently decent record for 20 years. God bless him for it. If he never makes another record but carries on shooting his mouth off I will consider he has still done his duty to rock’n’roll. The same goes for Gene Simmons.

Nikki Sixx: Nobody in rock has respect for Gene Simmons

Quiz of the Day: Kiss