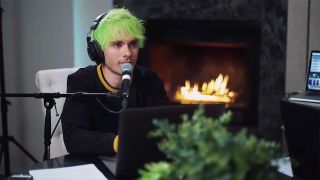 When I call Waterparks frontman Awsten Knight at 1pm, he hasn’t been awake for long. Since we spoke in February, the pandemic has changed things for everyone. Unsurprisingly, he’s a little less busy than usual.

Despite a familiar-sounding “descent into madness”, Knight’s getting through quarantine the same way as all of us: jigsaw puzzles, Animal Crossing and weighing up subscribing to streaming services. “It feels so wasteful. I was like, man, am I buying a fourth streaming thing? Per month? That seems irresponsible. Eh, fuck it. I’m home,” he laughs.

He’s also been doing DIY – namely deciding where to put his vision boards: “My place is very spacious and clean and the walls are white. I get nervous about putting too many things on the wall.”

Meanwhile, many of Waterparks' fans have been keeping themselves occupied with the latest season of Awsten’s podcast, Slumber Party. The premise is as ingenious as it is cringeworthy: Awsten and his friend Travis Riddle read out Waterparks fanfiction and rate it.

Awsten was innocent to the concept entirely until 2015, when he naively tweeted, 'I hope someday someone writes weird sexual fanfic about me and SpongeBob. That's what I want. These are my goals.'

“Someone wrote the most graphic thing about Spongebob in half an hour, and I was like – ‘never mind!’ That was my intro into fanfic,” he says.

Awsten’s fans often struggle with boundaries, and it seems counterintuitive for him to dip his toe into the murky pool of fanfic. But the idea originally came from him and Travis wanting to do something together: “The very first idea was to read the fanfiction and then talk about it and the validity of it and whether or not it could happen – which usually it couldn’t,” he laughs.

I hope someday someone writes weird sexual fanfic about me and SpongeBob. That's what I want. These are my goals.November 24, 2015

The current season was recorded last year, which Awsten is grateful for: “It’s already a struggle to keep your head right at home, he says. "If I had to read fanfiction all day, I wouldn’t be good!”

For season three, they’ve moved up in the world from Awsten’s bedroom to a set-up in a suite with a fireplace in Beverly Hills. He’s proud of the show’s quality, but ever the perfectionist, he’s looking to ramp it up: “I want to be like, on a horse in the next one,” he suggests – before adding that there’s the matter of financing a fleet of horses to think about. We brainstorm ways to get his Patreon subscribers to pay for it: “We will say your name while we’re on the horse and send you a video!”

He’s laughing, but there’s every chance he might go for it.

I ask Awsten whether he has a favourite submission. “No. Fanfic sucks, I hate it all, it’s all bad, I have no favourites,” he jokes, adding that what he does have is a handful of very least things he's received.

“There’s one where it was me but from every era with all these different colours of hair and then we all fuck each other," he says. "It was really weird. I hated that. I hate all the gross ones where they go over the top."

There is something he can stand, though, which is stories with a paranormal twist. “They’ve had demonic stuff happen, there have been fairies, there have been magical horses. There have been a few possessions. They definitely get weird with it.” He adds that this season, they’re leaning into the paranormal with a spooky episode. “The ones that stick with me, the ones I like the most, are the paranormal ones. The haunted ones. There’s an episode in this season that’s not out yet where it’s all the scary ones and we turn out the lights and make it spooky”.

While some of his dedicated fans can be aggressive, many of them are creative in their adoration. Opening the floodgates to reams of fanfiction seems like a recipe for chaos. At first, Awsten and Travis sourced the stories themselves, but after creating an inbox for the podcast, they noticed a shift in the content. “In the next season when they knew they could submit stories, it was a skyrocket of insane, nasty stuff. They were just trying to be shocking so they could get on. We let a few of them go, but not all, because we didn’t want it all to be like: ‘and THEN he put his dick in a pencil sharpener!’”

In recent months, Awsten has been trying to stay offline, both to mitigate the negativity and avoid internalising too much input on his music: “If you tweeted or made songs or art or whatever for your most sensitive followers, you would have the most shitty, bland work ever,” he says. "That’s another reason to just stay away and focus on the reason they’re supposed to be there in the first place – which is what you make.

"Some people say they’ll like it either way, and I’m like, on the off chance they hate it, I want it to at least be something I really love, so I can be like, well, I like it.”

There’s one band in particular whose approach to focusing on their own goals Awsten admires: “Sometimes I wonder if certain things will get liked more in the future. Like the way when Folie à Deux, the Fall Out Boy album, came out, everyone just fucking hated it, but it’s so good,” he says. “But they don’t look back on their past like it’s their glory days, they’re moving forward and I love that. It would be so easy for them to spoon feed people Cork Tree over and over, but if they had done that, where would they be right now? It doesn’t feel trend-chasing, and I really appreciate that.”

He’s quick, however, to not draw too many comparisons: “We’re definitely not Fall Out Boy level so we’re not big enough to be hated that much,” he laughs.

Even when he’s not reading their fanfiction, Awsten has to manage his band’s relationship with a passionate fandom who often express their obsession inappropriately. When he’s so often on the receiving end of adoration, it’s easy to forget that he’s a fan himself. One upcoming episode of Slumber Party, which Awsten calls his “most difficult” to film, will feature Joel Madden of Good Charlotte.

“It’s not cute, because we always have fanfiction of the guests," he says. "It was the weirdest thing ever. I respect him so much. Trying to get him to read that, I was like...uhh.” His discomfort is genuine, and he jokes that whenever someone he admires follows him, he gets “self-conscious” and posts less dumb stuff.

It’s a gentle reminder that no matter how many fans someone has, they’re likely also a fan of someone they admire in a way that makes them feel awkward – it’s just a matter of whether they choose to log off or write fanfiction about it.