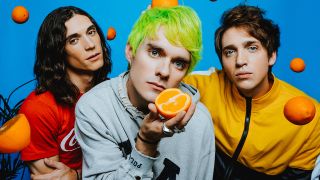 In order to get anywhere near Awsten Knight, lead singer of pop rock band Waterparks, I first have to get through a wall of dedicated fans.

Despite doors not opening until 6pm for the band’s first night of two at Electric Ballroom, Camden is already overrun by fans in green wigs – an homage to Knight’s own trademark neon hair. Many of them have tents, indicating that they’ve been there since the night before to secure a coveted spot on the barrier. Even behind the venue, fans wait between the back door and the tour bus, hoping to catch him unawares. But when I finally get on the bus, after being eyed suspiciously by kids singing Waterparks, it’s clear a tired Awsten isn’t going anywhere until he absolutely has to.

The deluge of fans, who call themselves “Parxies”, come as part of the package. Waterparks formed in 2011 in Houston, Texas, while the current lineup of Knight, Geoff Wigington and Otto Wood was cemented in 2012. After releasing two EPs and gaining momentum, they took on Good Charlotte’s Joel and Benji Madden as managers in 2015. Around the release of debut album Double Dare in 2016, Waterparks’ success seemed to snowball. That success has had its pros and cons – while Awsten is the first to thank his obsessive fans for pushing Waterparks to this point, he’s aware that some resent having to share their faves. “In 2016 when we started doing cool stuff we got a lot of like, ‘I’m glad this is happening I guess, but I miss when it was just my thing,’” he says, pausing to yell into his hands, “That is so selfish. Ahh! Even at that time I was like, I was poor then, I’m poor now, stop.” he laughs.

Awsten is more in tune with how his fans feel than a lot of artists. Aged 28, Awsten has spent most of his career, and life, online. He regularly interacts with fans on Twitter, but being so active comes with drawbacks: some of his fanbase presume an intimacy that doesn’t exist, and as a result, can act aggressively entitled. His mentions are full of so-called fans making fun of him – a common occurrence in stan communities, but no less jarring for the recipient. “They forget we don’t actually know each other. I feel like it’s hard for people to differentiate between social media and the actual reality. So when a shitload of people are like, ‘dumb shit crackhead!’ every day, it’s like, oh god,” he says, rubbing his eyes.

When Awsten reacts, even negatively, fans are just happy to be seen. “If I ever am like, ‘Jesus Christ, stop’, they’re like, oh my god! Marissa, he noticed you!” he laughs. “There are definitely ways to make me interact with you that aren’t being like, ‘you fucking rat face!’” It’s something he puts a lot of thought into: “I think social media has made people feel like they’re closer to artists or whoever than they actually are. When people feel close to you, they feel like they can poke at you,” he says.

But Awsten points out that he wouldn’t even take that negativity from a friend. “If all someone’s time spent with you is fucking with you, then that person is not a friend, that person is someone who fucks with you.” Awsten admits that he’s started to set boundaries, blocking those who step over the line and spending time off Twitter.

Those fans might be just a very loud minority, but the flood of negativity would get to anyone. Navigating social media in this way is a relatively new issue for artists, and it’s one Awsten is preoccupied with understanding.

Waterparks’ most recent record, FANDOM, released in October of last year, examines fan entitlement and negativity. On the surface, it’s a fun, chaotic pop record that experiments with electropop, heavier sounds and pop punk. Below that, however, Awsten’s exhaustion is palpable. On Watch What Happens Next, Awsten half-raps cutting lyrics that deal explicitly with his fans’ attempts to hold Waterparks back. I Miss Having Sex But At Least I Don’t Wanna Die Anymore lists the things his fans ask of him online: to follow back, to sing for them, to be something for everyone.

I ask whether anyone got what he was saying: “Everybody picked up on it, but nothing changed. Which is fine. I think awareness is the first step,” he adds, “I’ve seen people being like, ‘y’all heard FANDOM but you didn’t hear it’. Then the next day those same people are tripping out about some dumb shit. I’m like, dude, you didn’t hear it either! What!”

For Awsten, part of the difficulty seems to be that it’s impossible to differentiate between the people online screaming that he’s a “rat-faced motherfucker” and the people waiting in line quietly at a meet and greet. They’re often the same.

Last year, he released a book entitled You’d Be Paranoid Too (If Everyone Was Out to Get You). Written in 2018, the title references the new neuroses he’s found himself navigating with fame. Starting life as a long email before being designed and set as a collectible hardback by Amy Fleisher Madden, the book is written in Awsten’s signature chaotic humour. A memoir that mixes anecdotes with Q&As from his fans, it’s an insight into not only the inner-workings of his mind but the barrage of questions that he receives every single day. “I just needed something to fill my time,” he says modestly, but it’s an impressive feat for someone who spends his entire life writing, recording and touring.

Awsten walks a difficult line: respecting his fans, wanting to give them his time, but needing to set boundaries. “I have to remind myself that the reason we get to do any of this is because they are so wild about it. If nobody gave a shit, or if I tweeted and nobody cared, then we wouldn’t get to be here playing these shows. We’d still be in a van. Everything comes with pros and cons.” He loves making music, and he appreciates the people who let him do it. He worries over the safety of kids who are camping, and laments that he isn’t able to meet every single one after shows. “I feel bad sometimes. If we don’t have an off day, usually I’ll just be like, ‘thank you so much for coming!’ Because I know if I’m out there until like, 2 in the morning, the next day my voice is gonna feel like hell.”

But he gets himself in trouble online, too – most recently by promising new material if he got 20,000 retweets. He hadn’t actually cleared the decision with either his band or management, and as he tells the story, he’s got the cheeky glint in his eye of someone who enjoys making a nuisance of himself. The Parxies obliged, naturally, but he didn’t actually have anything lined up. He knew he had to give them something: “Drake doesn’t even get 20,000 retweets,” he smiles.

While management panicked and told him not to release anything, he was well aware he couldn’t get away with it. “I was on a group text with them [management] and I was like, guys listen, there’s a thing happening and I’m really sorry, but I tweeted this as a joke and right now it’s on like, 12,000 retweets and it’s not slowing down.” He laughs at his own mistake. “I felt like I needed to give them something.” In the end, he released a collection of demos entitled 1 (A Collection Of Unreleased Home Demos, This Is Not G, Or Even An Album, Shut Up Enjoy).

Despite that, and despite the recent release of both FANDOM and his book, Awsten hasn’t got any plans to take a break. Before this tour, he says he was “recording every single day at home, or if the studio was free,” adding that “you can always assume that I’m writing and recording every day, but just working out some ideas.”

While he can’t tell me specifically what’s next, he does have some plans for a “sleep album”. “I want every song to be 15-20 minutes. So I’ve been pushing some ideas around,” he says, adding that he plans to play with different genres even more than they did on FANDOM. “Outside of band world, people are getting a lot more experimental with genre. I was like, why can’t we do that! Oh right, I can. It’s going to make some people feel some types of ways, but people that are really on board will get it.” I remind him that it doesn’t matter what other people want: “you’ve got to do whatever you need to do artistically,” he agrees.

As we’re wrapping up, Awsten is watching bandmate Otto walk past the bus, laughing at his outfit: “I think I see someone with green hair in the background, he doesn’t know what he’s getting himself into,” he jokes.

Then, the girl with green hair meets another fan, and they start hugging, excited just to be at a Waterparks show. “That’s cute,” he smiles, “I like her hair”. I remind him that they’d freak out if they knew he was watching, and joke that they’re going to tweet mean things at him later. “True,” he laughs, but it’s clear that the uncertainty weighs on him.

At the show that night, with the mean tweets still on his mind, Awsten asks the crowd to put their hands up if they’ve ever bullied him online. The crowd laughs, and some proudly confess. “I hope a sinkhole opens up and eats those 20 people,” he says, “I hope you get eaten by wolves!” After half-apologising for wishing bad things on people, he moves on, and the crowd seems to forget, too.

But whether there really were only 20 people in that room who had tweeted mean shit at Awsten, or whether others were slower to admit it, the inability to know for sure would make anyone wary. You’d be paranoid, too.