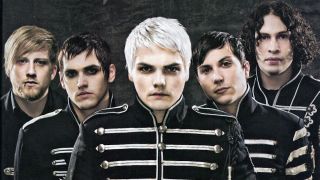 Tom Bryant's excellent new MCR biography The True Lives of My Chemical Romance is the definitive portrait of the influential New Jersey band, written with the band's blessing. Here's seven important life lessons we learned while leafing through its pages...

1. Near-Death Experiences have a way of focussing the mind

In his teens, MCR vocalist Gerard Way worked in a comic book in Bloomfield, New Jersey. Working late one night, the teenager was confronted by two armed robbers, who put a gun to the back off his head and demanded he pull out some special limited edition comic books they believed to be valuable. When the thieves opted not to put a bullet in the teenager’s head, Way made himself a promise that he’d do everything in his power to escape the traditional Jersey routine of “drinking, fucking and working a shit job.” Music and art became his escape route.

2. Sometimes people can really benefit from taking a punch in the face

In March 2000, MCR embarked upon their first ‘professional’ recording session, at Nada Studios in New Jersey. As fate would have it, the session coincided with Gerard Way needing emergency dental work for a tooth abscess, resulting in the singer moping around the studio in considerable pain. With the clock ticking on the session, producer Alex Saavedra decided to confront the problem head-on, by smacking Way in the mouth, and pushing him towards the recording booth. Shocked and pissed-off, the singer poured all his anger into his vocals on Vampires Will Never Hurt You. And MCR’s career was up and running.

When MCR came to record their debut album they enlisted the services of Geoff Rickly, frontman of local post-hardcore heroes Thursday, to produce the sessions. Despite the quintet’s rawness, Rickly saw huge potential in their music. “You’re going to be the biggest band in the world,” he told the disbelieving musicians. Alex Saavedra agreed. “I remember teasing [Geoff] going ‘My Chem are going to be headlining over you pretty soon. You just dug your own grave! You fucked up!‘” Turns out the wise old heads were right.

4. To achieve success, one must risk everything

MCR’s second album Three Cheers for Sweet Revenge was the record that broke the band worldwide. But things might have been entirely different had the band not completely reworked the album demos with producer Howard Benson, whose initial reaction to what he heard was “Man, there’s nothing here at all.” Benson took Gerard Way aside and laid down a simple challenge: “Are you willing to possibly piss off your current fans in order to make a big, huge rock album?” Way picked up the gauntlet and went off to create an album that would change the face of rock.

In the summer of 2004, as the buzz around his band began to develop from a whisper to a scream, Gerard Way should have been thrilled that all his teenage dreams were coming to fruition. Instead, the singer was suicidal, a borderline alcoholic and sometime dug abuser. When MCR were booked to play festival shows in Japan in August 2004, the singer didn’t bother packing a suitcase, so convinced was he that he wouldn’t be returning home alive. After spending ten minutes vomiting onstage at a show in Tokyo, he realised he badly needed help. He began seeing a therapist, who convinced him that he didn’t need to be the ‘fucked-up, tortured singer guy’ 24 hours a day. Slowly, Way began to put his life back together.

In August 2006, My Chemical Romance were booked to play the Reading festival, beneath headliners Pearl Jam and Placebo, but above Slayer. Fans of the LA thrash legends did not take kindly to this perceived slight, and began to throw plastic bottles at the New Jersey band. Unwisely, Way responded to this abuse by demanding more: it was, he later conceded, “a very large mistake.” A hail of golf balls, mud, fruit and piss-filled bottles duly rained down upon the quintet.

“At its peak,” Way laughed “there were even people in My Chem shirts throwing stuff at us.”

7. True freedom comes when everything has been lost

On May 19, 2012, back in the state where they grew up, My Chemical Romance closed out what would be their last ever show with the final lyric from Helena, “So long and good night.” Onstage, a voice inside told Gerard Way that his band’s great adventure was at an end. On March 22, 2013, My Chemical Romance formally announced that they had broken up. 15 months on, both Gerard Way and guitarist Frank Iero have solo albums ready for release, while founding member Ray Toro too is preparing new music, unbound by the huge expectations that made the band’s closing days a struggle. “Even The Beatles broke up,” Frank Iero notes sagely at the end of The True Lives… “I don’t think it was ever on the cards for us to do it forever.”

To buy The True Lives of My Chemical Romance click here.