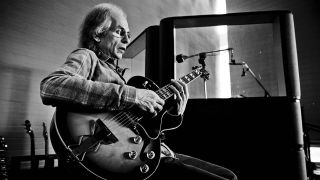 “I got into progressive music through friends when I was maybe 17 or 18 years old. We didn’t have the chance to see any of the shows at the time because nobody came to play in Brazil, but we were listening to King Crimson, Pink Floyd, Emerson, Lake And Palmer… Yes were my favourites though, especially Steve Howe. I liked his style and technique; the way he brought in [elements of] classical guitar and folk guitar.

When I first started playing guitar, I didn’t know how to read music so I would play by ear and Mood For A Day was one of the songs I used to play. That made me realise that a lot of things I thought were impossible, were possible. Steve Howe showed me that through his music on songs like Clap, Mood For A Day and Tales From Topographic Oceans which has a lot of beautiful acoustic pieces. I love Steve’s solo material as well, but Yes were always a big influence in my life and they still are. Even now I find new things in their music, and Sepultura’s new album is called Machine Messiah, which is named after a song from Drama.

Yes are great teachers, not only musically but also lyrically. They talk about so many different things, and write beautiful poetry. My favourite album has to be Close To The Edge, but I like Relayer as well – Patrick Moraz did a great job. And I love Trevor Rabin too! I saw that line-up when they came to Rock In Rio in 1985 and I had the opportunity to see Chris Squire’s solo show when I lived in Phoenix in the 90s. He played in a very small venue with Alan White on the drums – it was fantastic! I saw them all play together again on the Union Tour and it was so inspiring to see that they could put whatever animosity to one side and just go on stage to play.

Sepultura actually played with Yes at the Sweden Rock Festival [in 2003] and we had the privilege of being on the same plane. I talked to Jon Anderson and Rick Wakeman, and we took photos. They were so nice. We were on different stages, but at least I can say we played with Yes!”

Machine Messiah is out now through Nuclear Blast. For more, see: www.sepultura.com.

My Prog Hero: Kip Winger on why he loves Peter Gabriel