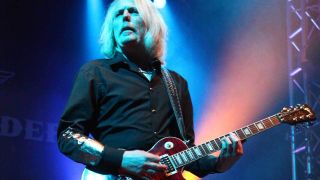 Few guitarists are as synonymous with the Gibson Les Paul as Black Star Riders’ man Scott Gorham. There’s Jimmy Page, of course. And Slash. But check out almost any footage of Thin Lizzy at their peak and there’s Gorham, fleet of finger and long of hair, leaning into one of his bandmates, trusty Les Paul to hand. The two are almost inseparable.

First introduced in 1952 and gradually refined until near perfection was attained — the humbucking pickups were introduced in 1958, while the following year saw the neck slimmed down — the Les Paul has been Gorham’s partner-in-crime since the day Phil Lynott gave him the Thin Lizzy job.

Over four decades later, with the Q Gibson Les Paul Award being doled out at London’s Roundhouse this Wednesday, we asked Gorham to explain the guitar for people who know nothing about its magic.

Can you remember the first Les Paul you ever saw?

The first one I saw was Eric Clapton’s. It was on TV, on one of those American entertainment programmes. I think I was 15 years old. I loved his playing anyway, but when I saw it was a Les Paul he was getting the sounds from it teed up my imagination in a really big way. Obviously he didn’t play the Les Paul all the time, but on that particular occasion he did.

Tell us about your first Les Paul

I got the audition for Thin Lizzy in 1974, and because I couldn’t afford a real one I had a black Japanese Les Paul copy. As soon as I opened the guitar case I could see everyone rolling their eyes, thinking “what the fuck is that thing?”. I pulled it out, and it actually sounded OK. It really did. But it was just a cheap piece of shit.

I passed the audition and got the gig. And the first thing Phil says is, “We’re gonna have to get you a new guitar. What do you want?” And I said, “I want a fucking Les Paul!” Thin Lizzy were stone-cold broke at the time, but he was good to his word. He and I went down to the music shop in town, and I was like a kid in a candy store.

I went straight over to a Les Paul Standard, and he looked at me and shook his head. So I walked over to another, and got a shake of the head again. And that’s when I went over to the Les Paul Deluxe. It was a great looking guitar. I picked it up, and it fit my hand really well. And that was the guitar I played in Thin Lizzy for the first few years.

What is it that makes the Les Paul special?

There’s a lot of things. Obviously, when you’re a kid and your heroes play them, that plays havoc with your brain. You listen to the sounds that other players get out of the Les Paul, and it was almost like the kind of amplifier they were using didn’t make any difference. It was always that great sound.

They’re also beautiful and so well-made. You get it in your hands and it just fits. The neck is amazing, and then you plug it in and hear that sound, and you fall in love. So it’s been my main choice of weapon throughout my career.

They’re famously heavy. Has that ever been an issue for you?

The thing about the Les Paul is that there’s not one that’s exactly the same as the last one, weight included. I have about four of mine chambered [a process where air pockets are carved out of the guitar’s solid body] by Gibson, and this makes them a lot lighter without really affecting the sound in any way.

I also have a few Les Pauls that are completely solid, and some guys really prefer that. I was doing some shows with Zakk Wylde, and I picked up one of his: I almost dropped the thing it was so fucking heavy! He likes everything heavy, while I like something that’s easier to wheel around the stage.

Can you instantly recognise the sound of a Les Paul when you hear one?

You really can. Sometimes you can’t, because of the array of foot pedals we’ve got these days, but if you hear a Les Paul that’s been plugged straight into an amp, you can hear it straight off the bat. It’s the same with the Stratocaster: You know it’s the Stratocaster.

Who are the great Les Paul guitarists?

Peter Green had a great sound. Gary Moore was a killer Les Paul guy. Clapton, as I’ve mentioned. Jimmy Page, for godssakes! He came up with riffs that will haunt us for the rest of our lives!

None of us play the exact same guitar all the time, but if there’s one guitar that comes to be your main piece, for me it’s the Les Paul and for a lot of the other guys it’s the Les Paul. It’s just a sexy-assed guitar, you know?

If you had to play one song to someone, to explain what the Les Paul was all about, what would you choose?

I’d go to Peter Green’s Fleetwood Mac, and The Green Manalishi (With The Two Prong Crown). It’s got that classic mid-pickup sound, clean and tough at the same time. He gives you the full Les Paul compendium on one song.

The Guitars That Built Rock: The Gibson Les Paul