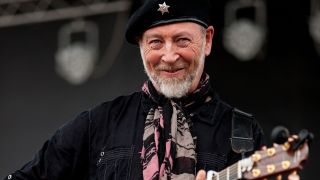 “My dad had a set of Les Paul records – 78s he’d bought in the late 40s when they came out – and I always remember hearing this weird music.

“A lot of the early records are multi-tracked, he’s using double- speed effects, he’s inventing tape echo, all these amazing special effects. It just sounded like music from Mars to me. If you went to see a sci-fi film it’d have all these spacey sounds from oscillators and theremins – and this was like science fiction //music//. If there were Martians this is the music they’d be playing.

“Favourite songs? His version of Ellington’s Caravan is beautiful and strange. How High The Moon was a big hit for him and Mary Ford of course, and What Is This Thing Called Love. The definitive anthology is Les Paul: The Legend And The Legacy which is his complete works for Capitol. It’s really well mastered plus it has some of the radio shows that he and Mary did, and they’re hilarious.

“He was great fun too, endless wisecracks. He was a showman and an incredible boffin. The guy never stopped inventing, you got the idea he’d spend most of his day in his workshop. I asked him once about one of these experimental guitars he was playing at his club [The Iridium, New York]. I said, What’s that pickup? ‘Ah,’ he said, ‘just something I’m tinkering with.”

Richard Thompson’s Acoustic Classics is out on July 21 via Proper Records. He’s currently on tour.