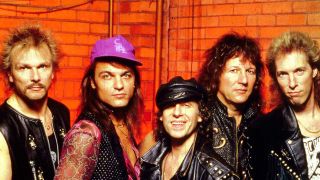 Guitarist Rudolf Schenker founded the very first Scorpions line-up in Hannover in 1965, but it was the arrival four years later of Schenker’s younger brother Michael on guitar and vocalist Klaus Meine that really set the wheels in motion. Since then they’ve been through not only a number of personnel changes, but also different musical styles: the psychedelic influences of their earlier years gave way to prog-tinged heavy rock, before they hit the mark with slick, chart-friendly, 80s heavy rock.

Early albums such as Lonesome Crow and Fly To The Rainbow (the latter featuring Hendrix- inspired hotshot Uli Jon Roth in place of the departed Michael Schenker) created a buzz in their native Germany.

The band’s real breakthrough came in November 1975, when they made their live UK debut at London’s Marquee club in support of that year’s In Trance, an album which marked the start of a long and fruitful relationship with producer Dieter Dierks. That performance helped transform the Scorpions from Germanic curiosity to genuine international contenders, ensuring that their reputation spread across Europe and America.

Roth departed in 1978, and by the end of the 70s the ‘classic’ Scorpions line-up – Klaus Meine, Rudolf Schenker, guitarist Matthias Jabs, bassist Francis Buccholz and drummer Herman Rarebell – was in place. With it came proper global success, starting with Lovedrive and peaking with Love At First Sting. The latter sold more than three million copies, propelled by MTV staple Rock You Like A Hurricane. But even this paled next to 1991’s whistle-tastic Winds Of Change, the worldwide hit single inspired by the fall of the Berlin Wall two years earlier.

The band might have seen a decline in their record sales since that high-water mark, but they remain a hugely successful touring act. And as you read this, they’re still out there on the road, with a headline slot at this year's Bloodstock Festival lined up for August.

After half a decade on the cusp, this was the album that marked the band becoming major international players. As they eased into the 80s, the Scorpions became confident and comfortable with the demands of the era.

From the moment that instantly recognisable staccato riff ushers in the title track, there’s not a wasted moment: the pop-rock sensibility of No One Like You, the Eastern-tinged inflections of China White, the epic balladry of When The Smoke Is Going Down, and thunderous set-closer Dynamite. Even more remarkable is that Meine was suffering potentially career-ending throat problems when they recorded it.View Deal

Love At First Sting is packed with high-quality songs that struck a chord with the US market but retained their European roots, and the party metal of Bad Boys Running Wild, fan tribute Coming Home and the heartfelt ballad Still Loving You proved to be winners not only on record but on stage as well.View Deal

Their first album with Dieter Dierks producing, and the one with which the band moved away from their early psychedelic leanings. It’s squarely planted in the world of mid-70s hard rock, with Roth’s virtuoso guitar pyrotechnics a vital counterpoint to the more commercial leanings.

Top Of The Bill celebrates life on the road, and Night Lights allows Roth to show off his chops. But there are some evocative moments too: the title track is the sound of a band who haven’t fully shed their psychedelic skin, while Robot Man is eerily effective. In Trance was also the first album to feature what is now the unmistakable Scorpions logo.View Deal

It’s tough to get past the controversial and, frankly, ill-advised original sleeve, but musically Virgin Killer is probably the Scorpions’ greatest 70s album.

The material was consistently stronger than at any other point during Roth’s tenure with the band, as proved by the number of songs that would become major live favourites in the ensuing years: Catch Your Train and the dynamic Picture Life positively gallop along, while Polar Nights enables Roth to stretch his creative muscles and show that there was more to him than rehashed Hendrix licks. This album was a key step in the Scorpions’ musical development.View Deal

Exit Uli Jon Roth, enter Matthias Jabs for the album which found the Scorpions embracing the slick hard rock approach with which they made their name. With Jabs on board (and, on Coast To Coast, Michael Schenker guesting), the songs were sharper and shorter, as well as a little less reliant on extensive guitar solos than during the Roth era.

Dovetailing perfectly with what peers like AC/DC, Aerosmith and Ted Nugent were doing at the time, the Scorpions added arena sparkle to the title track, Another Piece Of Meat and Can’t Get Enough, and the soft- centred Holiday brought another vital element to the band’s armoury: the big, weepy ballad.View Deal

At the time, the controversy surrounding yet another provocative cover distracted from the music. Animal Magnetism also suffered from being sandwiched between the standout albums: Lovedrive and Blackout.

But there’s much to recommend: The Zoo, with its menacing rhythm, is an all-time Scorpions classic; Make It Real is an electrifying anthem; and Don’t Make No Promises (Your Body Can’t Keep) picks up where the equally lurid Another Piece Of Meat left off. Throw in the Zeppelin-esque stylings of the title track, and you’re left with an unfairly under-appreciated album.View Deal

In many respects Savage Amusement was the end of an era for the Scorpions, in that it was the last of their albums to be produced by Dieter Dierks and also their final album for the Harvest label.

Released three years after Love At First Sting, it was a surprisingly low-key affair. While it lacks any stone-cold Scorpions classics, Rhythm Of Love and Believe In Love both hold their own, even if the overly glossy production dates them inextricably to their time. But while Savage Amusement did fall short of the band’s best material, it still managed to show that the Scorpions hadn’t completely lost their sting.View Deal

Aka ‘the one with Wind Of Change on it’. The band’s biggest hit, that song was either risible or inspirational, depending on your tolerance for lighters-in-the-air anthems about world peace delivered by whistling Germans.

Beyond that freakishly successful single, Crazy World is the best Scorpions album of the 90s. Crucially, the songs retained a strong connection to their past: the likes of Tease Me Please Me, Don’t Believe Her and Lust Or Love wouldn’t have sounded out of place on Animal Magnetism, and the sweeping Send Me An Angel is up there among the band’s finest ballads. There are one or two dips, but it doesn’t disgrace the band’s heritage.View Deal

Released on the back of a series of mediocre albums and unwise dabblings with ‘modern’ trends, Unbreakable thankfully saw the Scorpions returning to what they did best.

Their original plan was to reunite with producer Dieter Dierks. And while that never materialised, the band still managed to come up with a set of straightforward, melodic hard rock anthems in the classic Scorpions tradition. What really made it work was that they weren’t trying to be anything other than themselves on songs like New Generation, Someday Is Now and Remember The Good Times. The result: their best record for more than a decade.View Deal

This was first published in Classic Rock issue 169.