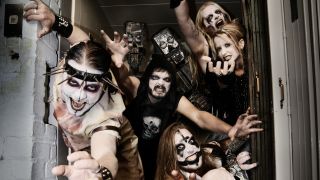 From the triumphant reunion of the classic Emperor lineup to the mindbending sax ’n’ violence of Shining’s main stage debut, this year’s Bloodstock festival provided its usual array of memorable moments.

But one peculiar and heartening sight stood out above them all: as Evil Scarecrow kicked off Saturday’s entertainment on the main stage, a huge crowd of diehard metalheads gathered to laugh, sing, scuttle, waltz and join together in a startling and laudably ludicrous outbreak of robot dancing, as five lunatics from the Midlands defied the odds to conquer the festival with some of the most heroically daft behaviour the metal world has ever seen. Having packed the Sophie Lancaster stage in 2013, to the extent that there were hundreds of people craning their necks outside the tent to catch a glimpse of these mischievous miscreants at full pelt, Evil Scarecrow were an obvious choice for a main stage opener in 2014… but no one truly expected to see them take the whole event apart.

“It was fucking surreal, really,” notes a bewildered Dr Hell, the band’s frontman and spike-headed master of ceremonies. “We were line-checking and doing bits and bobs beforehand then the gates opened and there were a handful of people stood at the barrier… a lady with her face made up and a couple of techs from the New Blood stage… so I turned to the others and said ‘Three people! I’m happy with that!’ and we went off to get changed. When we came back it was mindblowing. We’d always secretly hoped that we’d pull a decent crowd, but we weren’t expecting that. It was fucking nuts. To have everyone, even right at the back, waltzing and scuttling and acting like idiots was really special.”

If you want to know what the real British metal scene looks like, you only need to have observed the enormous crowd that came to see Evil Scarecrow at Bloodstock. Away from the hype-led posturing of heavy music’s trendy London media wing, this self-proclaimed ‘parody metal band’ have been doing things the righteous, DIY way for many years now, exhibiting a remorseless enthusiasm for the UK’s lager-stained toilet circuit and playing to anyone and everyone that will have them. And, most importantly, mucking about like a bunch of corpsepainted loonbag toddlers after too much Sunny Delight. An extraordinary number of gigs down the line, Evil Scarecrow have won over so many people with their infectious silliness that they now, almost accidentally, find themselves on the brink of being a genuinely significant concern on the British scene, not least due to the imminent release of their Russ Russell-produced and fan-funded third album.

“It started too long ago to remember, but it was quite a few years back,” Dr Hell blearily recalls. “We did a lot of nothing for a while. It was myself and Brother Pain [ES guitarist and, apparently, time traveller – full name: Brother Dimitri Pain of the Fourth Order of the Megadrive] that decided to form a new band and play silly buggers, and a few people have come and gone along the way. The last four or five years have seen a concerted effort to do it ‘properly’ – and can you write ‘properly’ in massive inverted commas? – but we’ve never done it for anything other than a bit of a giggle and for ourselves, and we’re just fortunate that there seems to be an ever-growing army of people who also think it’s a giggle and are prepared to join us in our daft antics. There was no masterplan or road map to getting where we’ve got to, other than working hard and having a laugh.”

If you spend too much time online, you might end up thinking that the UK metal underground is populated entirely by embittered trolls and po-faced elitists. But Evil Scarecrow have become such an acclaimed and omnipresent fixture at festivals and small venues in the UK that such sneering portrayals of the broader culture simply don’t hold up to scrutiny. Metalheads like to laugh – at themselves as much as at everyone else – and the Scarecrow ethos of “having a giggle and mucking about” clearly resonates with the vast majority, partly because Dr Hell and his comrades – Brother Pain, keyboardist Princess Luxury (“allegedly named after a mattress”), bassist Kraven Morrdeth (“some sort of executioner”) and drummer Monty Blitzfist (“the bounciest drummer in heavy metal”) – are clearly huge metal fans themselves. When they take the piss out of the genre’s most preposterous clichés, they do it with genuine affection, while encouraging everyone to put their crab claws in the air – for crustacean-centric show-stopper Crabulon – and indulge in some strenuous scuttling. Yes, it’s ridiculous, but it’s also brilliant fun, disarmingly inclusive and, as the new album proves, backed up with some seriously credible and inventive music, not to mention some of the most extraordinary homemade props you’ll ever see. Plus, of course, Evil Scarecrow are an entirely self-made and self-sufficient phenomenon – and who doesn’t love an underdog?

“We’ve never really tried to win anyone over,” says Dr Hell. “It’s just about having a good attitude towards playing live music. We’ve always wanted to play. Back in the day we’d play anywhere to anybody. If there was a bottle of whiskey in it for us… boom! Let’s do it! We all get on really well, we have a laugh together, so it’s just like a night out. Recently, we’ve started trying to scale the gigs down a little bit because we feel we’ve done the circuit to death and it’s time to try and do fewer but bigger gigs. That’s the plan. But who knows? After Bloodstock we’ll probably get picked up by EMI or someone, won’t we? We’ll be touring round the world and there’ll be loads of hookers and blow to fill up our free time! Ha ha! Ultimately, we expect nothing, so when we get anything it’s like a super chocolate surprise. If we can get through a gig without any of our equipment catching fire then it’s a success.”

As most people must surely know by now, the established high point of any Evil Scarecrow gig comes when the band perform Robototron and cajole audiences into performing the ‘robot dance’. As stupid as it first appears, it’s a masterstroke of audience participation that works every single time, as even the most imperious and serious-looking Viking warriors find themselves drawn into the band’s world of daftness. But as Dr Hell explains, whether it’s dancing to Robototron or waltzing to new song Dance Of The Cyclops, none of this stuff was ever rigorously planned. Somehow, it just happened. And now it keeps on happening, spreading a little much-needed and booze-fuelled joy among the metal faithful. Despite having played Robototron at every show for the last five years or more, Dr Hell still enjoys it every time.

“Robototron is dead easy to play and it’s always good fun, so I don’t see it as a millstone,” laughs the frontman. “The only contrived idea we came up with was when Brother Pain suggested writing a song like Tornado Of Souls by Megadeth, something tornado-related, and we could all spin around and get the crowd spinning really fast and see who’s sick first. But really, it all starts with a riff, or maybe just a silly idea. Most of that stuff just happens organically. We did Crabulon a couple of times and then thought, ‘Let’s do some crab pincers!’, which worked. But it’s not something we think about too much. We’re mostly sat around in our pants playing Xbox, to be honest.”

More through accident than design, Evil Scarecrow are on the verge of a significant breakthrough right now. In stark contrast to their first two albums (which, with all due respect, sounded like they were recorded in a bucket in a ditch), new, rudely titled album Galactic Hunt ( “I don’t know what you mean, mate,” frowns Dr Hell. “It’s a nice homage to sci-fi. You’ve obviously got a dirty mind”) sounds phenomenal and boasts numerous songs destined to become live Scarecrow classics to rival established favourites like Robototron, Blacken The Everything and, erm, the Thundercats theme tune.

“It’s a massive step up from where we were,” Dr Hell agrees. “We’re proud of it and we can’t thank Russ [Russell] enough for all the effort he’s put into it. But even with an album we’re all happy with, I don’t think our expectations have changed. You do a show like Bloodstock and a lot of people suddenly want to suck your cock for a week or two. It could all be different next week. But it’s great when things happen. It’s onwards and upwards and we still have ambitions. We’re working really hard, so as long as people are behind us, we’ll keep doing it.”

And what can we expect from the live shows in future? What could possibly top the robot dance and the scuttling Crabulon?

“I don’t know…” Dr Hell ponders. “What about Dogotron? I could shout ‘Everybody bark!’ …and they would, wouldn’t they?”

Galactic Hunt is out now via Pledge Music

“We needed something special for Bloodstock, but a real horse would’ve been too difficult, so my friend Janine helped to build this one.”

_Try it yourself: _Tons of papier mâché. Avoid real horses.

“Our friends Dave and Dean made these and the fake Marshalls out of crap Dean found in a bin. He’s a genius.”

Try it yourself: Raid a skip… gaffa tape… done.

Try it yourself: Too elaborate – ask Dean to make you one.

“Too expensive, so we asked people at Bloodstock to throw grass instead.”

Try it yourself: Chuck grass in the air and shout “Bang!”