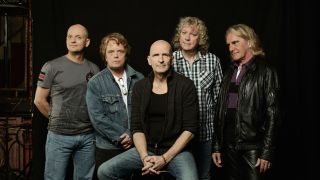 Saga’s timing couldn’t have been worse...

As a band that had progressive elements naturally implanted into their music, the 1978 release of their debut came amidst the war cries of punk. Yet they managed to survive the onslaught, often by adding a contemporary edge to their music. They may have been influenced by fellow Canadians Rush, but there were also hints of Helix or even Triumph that would become part of their sound, and they would go on to create some dazzling albums. That desire to remain fresh and not simply rehash the works of the progressive rock pioneers was pivotal, and the opening track, How Long, on that self-titled release had a distinctive new wave element.

That’s not to say that the New Wave fusion hampered their ambition, and the debut also contained – somewhat bizarrely – chapters four and six of a concept piece that was spread out across their first four albums. Given that this story was based around the rather fanciful notion of aliens visiting Earth to put Einstein’s pickled, preserved brain into a new body, their prog credentials were pretty much assured. The band even joked at the time that the pursuit of such an elaborate storyline ensured that they released at least four albums. The third of these chapters, It’s Time was released as a single, and although it didn’t chart, it remained a live favourite, even if the band’s on-stage garb was pretty dubious.

By the time of their third album in 1980, Saga had managed to further define their sound and identity. There were elements of rock that hinted at the type of expansive pomp that Asia would later excel at recording. This was ambitious music that was still somehow restrained and avoided any long-winded superfluity. The album’s highlight was the effortless Don’t Be Late [another part of the Einstein brain saga], captured here as a live performance in Dortmund later that year. We’re still not sure what to make of Michael Sadler’s moustache though …

The band had managed to generate a decent following but it was the unexpected hit single called On The Loose in 1981 – which was a top 5 single in the States – which would seal their reputation. By then, the band’s sound had moved towards a more melodic rock approach, even if it still maintained prog elements. In the early 80’s, the staccato verse and the undeniably catchy chorus – along with rather nifty guitar and keyboard solos – were perfect for radio. Much like Yes reinvented themselves around the same time, this sparkling combination of all their influences proved that they could adapt and create uplifting mainstream rock.

Saga continued that affinity with forging accessible pop-rock, and even if the tracks avoided an inclination to expand into progressive epics, the band continued to write songs that would become mainstays on US commercial radio. As for the videos, they were filled with early 80’s explosions, hammed up acting, jumpsuits and building block video screens. Nowhere is that more evident than on the buoyant, anthemic pomp of 1983’s The Flyer, which remains mesmerising despite the visual distractions.

There were those who criticised the band for openly displaying a pop-oriented flare during the mid to late 80’s, and although there is an element of truth in those claims, the reality was that songs such as Only Time Will Tell weren’t far removed from the type of slick, rewarding and valid albums that Yes and Genesis were releasing at that time. Certainly, there are only a handful of acts who have proved adept at mixing straight pop-rock with a quirkier, energetic element.

Their 90’s output was clouded by an ill-judged attempt at writing the soundtrack for the short-lived American TV show Cobra. Naturally there were compromises that needed to be made, and the resultant album Steel Umbrellas is still scoffed at by a majority of fans today. Line-up changes also resulted in some relatively lacklustre albums, but the return of original singer Michael Sadler in 2012 reignited their career, and songs such as Anywhere You Want To Go proved that they haven’t lost their edge

Returning this year with Sagacity, the band are as formidable as they’ve always been.