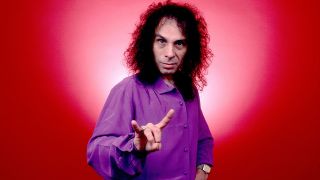 When Ronnie James Dio passed away on May 16, 2010, the world lost a true icon. Few people get a chance to front one legendary band. He fronted three: 70s rock gods Rainbow, the rejuvenated Black Sabbath in the early 80s (and again in the early 90s), and his own eponymous band, Dio. Three of the album he made along the way – Rainbow’s Rising, Sabbath’s Heaven And Hell and Dio’s Holy Diver – stand among the greatest in the history of rock and metal.

In 2008,. Metal Hammer’s Dave Ling sat down for an in-depth conversation with Ronnie, touching on the many highs of his career. This is what the great man had to say…

So, you were born in Portsmouth, New Hampshire, before the family moved to Cortland in upstate New York…

“That’s right. Cortland was where my father, who was in the services, always came from. It’s 250 miles away from New York, so there were plenty of open spaces. A small town with a great small-town atmosphere; you didn’t have to lock your front door. Paedophilia was a word that was impossible to spell, and no one knew what it meant.”

“Nothing happened to bruise my psyche. My parents came from farm stock.”

Were you a gifted or enthusiastic student?

“Both. I wasn’t an Einstein kinda guy but school was always very easy for me. I liked to learn. From an early age I always had a really good command of the English language. Communication is the key to everything that happens in the world.”

Was music in your blood?

“There were no musicians in the family whatsoever, but due to Italian culture music was embedded in the town. I grew up listening to a lot of opera, which really affected my singing style.”

Why did you abandon the trumpet, which you were good at, to become a singer?

“It was such an easy instrument that eventually it became boring. It also made me one person among many. I didn’t want to be a cog in a wheel. Then, luckily, I discovered rock ’n’ roll.”

And you almost became a pharmacist?

“I majored in pharmacy at university. As parents always say, ‘If you’re gonna play this stupid rock ’n’ roll, you need something as a back-up.’ Being obedient and because they’d worked hard to send me to university, I felt obliged to comply.”

Your stage surname of Dio is the Italian word for god.

“My real surname [Padavona] was too long and exotic. It had to be memorable. Wanting to keep my Italian identity, I chose a Mafia boss named Johnny Dio. Not to cash in on his infamy, but because it was short and to the point.”

Did co-founding Rainbow with ex-Deep Purple guitarist Ritchie Blackmore in 1975 teach you a lot, good and bad?

“Oh, absolutely. Richie was an extremist. He was either completely pissed off at you or he liked you, there was little room in between. Luckily, he was never really cruel to me but it taught me a lot about personalities. I tried never to do that.”

How did your first real taste of stardom with Rainbow affect you?

“It probably changed my attitude a little, but fame was never really my goal whichever band I was with. I never felt that being a celebrity was important. It’s nice to be appreciated, but being idolised is quite hard and I’ve never really sought it. No, being in Rainbow with this genius of a guitar player was more about how my music was progressing, not my celebrity status.”

What people tend to forget is that Black Sabbath were at an all-time low when you joined them in late 1979. Are you proud that you helped to rectify that?

“Yeah. And I was happy for the other guys too. They could hold their heads high again and say, ‘See, we are not the crap you said we were.’”

Do you regret being so negative about your predecessor, Ozzy Osbourne, back then, as that rivalry never really died out?

“I was never more negative than the people around Ozzy, or himself. I never, ever started any feuding with him. I never said he couldn’t sing or write. Had I thought he was talentless I’d have refused to sing Paranoid or Iron Man. I understood his importance to that band. As for being sorry, if you can point out any negativity in what I’ve said about him…”

Well, in a 1981 interview you stated: ‘Ozzy Osbourne is a moron. He couldn’t carry a tune around in a suitcase.’

“Well, alright, but being that vitriolic I must’ve been responding to something equally extreme. Generally I take the moral high ground but sometimes if an arrow has been shot at me, I shoot it back. The negativity usually comes from someplace else, and I get pissed off [and respond]. So many unfounded things are said about me. There’s jealousy involved when you’re succeeding and others aren’t.”

After Sabbath imploded back in 1982, did forming your own band solve all your problems or present a new set?

“There were no problems, if I’m honest. Problems only come when you’ve had success. Forming Dio, the band, was all about the challenge of reflecting what I’d learned in Elf, Rainbow, Sabbath – even way back to Ronnie Dio & The Redcaps [in 1958].”

In 1986 you rallied the all-star metal charity project Hear N’ Aid, raising $1 million for African famine relief in that first year. Did you ever see tangible evidence of the good it did?

“It’s probably up to three or four million now. I’m unaware of the benefits it reaped, but I did place the profits in what I felt were the right hands. I hope that all the food didn’t end up sitting on a pier somewhere, or in the coffers of the country’s leaders, but like all the participants I did it for all the right reasons. The important part was that we tried.”

You’ve retained your voice while others younger than you have lost theirs. How?

“I take care of it and I know how to sing; I have great technique. I was given a good voice in the first place, but I have the brains to know how to use it.”