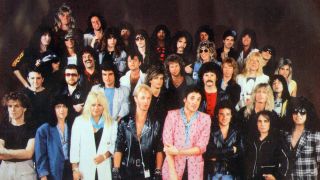 Ronnie James Dio: [Jimmy and Vivian] noticed the lack of people from our genre of music in all of this and felt they’d like to pursue it.

Vivian Campbell (guitarist, Dio): We didn’t write the lyric – we said we’d get Ronnie involved. Ronnie didn’t want to know about it. He thought it was a distraction, because at the time we were doing the Dio record Sacred Heart. We left it a couple of weeks, and Ronnie obviously conferred with Wendy about it. She thought it was a better idea than he did, so he came back and said: “Okay, let’s do this.”

Wendy Dio: Actually I think he just came round to feeling that the kids in Africa needed some help.

Vivian Campbell: We had the music a hundred per cent complete, we just needed a lyric.

Wendy Dio: Sure, they brought their idea to Ronnie… but Ronnie was definitely involved in writing the music as well as the lyric.

Vivian Campbell: [Ronnie] would be insulted if you even suggested a lyric or a word or a title. He wanted complete autonomy. We knew it would be a lot easier to get it off the ground with Ronnie’s name and not just me and Jimmy.

Wendy Dio: Hear ’n Aid had to be a non-profit organisation… We had to set up a board of directors, fourteen people, and all decisions had to be made by the board. My role was getting the licensing. The musicians were fantastic, they’ll always give their right arm and leg for charity, but then you have to get permissions from their managers and record companies. That was a nightmare. It dragged on for months after the track was completed.

Ronnie James Dio: There were a lot of Fred Bloggses who wanted to get involved, but the project needed heavyweights to sell it.

Vivian Campbell: I remember calling Jon Bon Jovi… I had to make like fourteen calls to get him on the phone. At one point I called his mother. And in the end we didn’t get Jon to do it.

Ronnie James Dio: He probably had to brush his teeth that day.

Wendy Dio: I think Rob Halford of Judas Priest was the first to say yes… Then Queensrÿche, Twisted Sister… came aboard pretty quick. And they were all on their best behaviour – even Ted Nugent. The great, the good and the rest give it their best shot to fight famine in Africa.

Ronnie James Dio: There were people who wouldn’t contribute… their talent to help feed a poor, starving kid.

Ted Nugent: I care deeply about people in Africa. I’m a black man from Detroit. Listen to my guitar playing. There’s no white boys there.

Wendy Dio: [The Hear ’n Aid single] Stars took about two weeks. The first session was at Sound City in LA, where we did the basic backing track.

Eddie Ojeda (guitarist, Twisted Sister): We were all sent a demo of the song’s backing track and melody. I got mine about a week before the session. We each had twelve bars for our solos.

Wendy Dio: Then we moved into A&M Studios, where they’d recorded We Are The World, and on the first day we did vocals.

Eddie Ojeda: I was hanging out with Nikki Sixx. He gave me a lift to the studio. It was a lot of fun hanging out with everybody. We all stayed at the same hotel in Hollyweird… We all went to the same places every night, which was a strip joint first, and then on to the Rainbow.

Eric Bloom (Blue Öyster Cult): I arrived from New York without having heard any of the music. Arrived at the hotel and heard a copy of the track, went down to the studio… there’s everyone from the dawn of man in the heavy rock area.

Rob Halford: I imagine most of the fans assumed we all knew each other… we didn’t at all. In fact for the first few hours, I think most of us were looking at     each other the way we got portrayed in rock magazines… Once we’d let our guards drop a bit the feeling was just tremendous…to sit down and talk with people I’ve always admired.

Wendy Dio: Ronnie decided who would do what and when, and they pretty much did as they were told. They started around noon and kept going until everybody was tired.

Blackie Lawless (W.A.S.P.): I think everyone was very intimidated being there on that night. You could feel that sort of tension in the room as the night wore on. Chris [Holmes, W.A.S.P. guitarist] and I got there about 6pm and we didn’t start to shoot the video until about 9pm. Needless to say as the cameras started to roll most everyone was slightly inebriated. For us there were a lot of guys in that room that we had grown up listening to and idolised, so that certainly led to some tension. Being in the presence of that ‘rock royalty’ was very scary. As the years have gone by I’ve found out that they were all feeling the same thing.

Wendy Dio: The atmosphere in the studio was just magic. That’s what Ronnie would say if he was here now. As well as cramming all those artists in there, we had a video crew, Tasco Video, about six or eight people, there all the time. They did a great job and never got in the way.

Geoff Tate (Queensrÿche): I walked into the performance room and there was a mic stand… “Here you go, here’s the lyrics for the song, the headphones are set up for you.” So I’m standing there, by myself, looking through the glass to the control room, and Ronnie is in there with about twenty other people, all of these legendary performers. Ted Nugent and Rob Halford, and the guys from Blue Öyster Cult, and all of these different artists that I really respect, and they’re all watching me perform… I was very nervous, but Ronnie helped calm me down and coached me through the song, so it turned out okay.

Ronnie James Dio: I thought the chorus was going to be a definite problem so I just had Kevin [DuBrow, Quiet Riot singer] take care of things. I used a bit of psychology, you see? I took the biggest bad boy of the lot and asked him to keep things in order. He then had a degree of responsibility given to him by someone he respects, and he was great. It worked!

Wendy Dio: Once the vocals were sorted, we spent about another day-and-a-half getting the guitars down.

Vivian Campbell: You put a bunch of eighties guitarists in the same room and, of course, there’s going to be competition for bragging rights. They were even arguing about who had the biggest hair.

Ted Nugent: I did not notice that. You’re not gonna find a more aggressive guy on the planet than me, and I mean that. I’m an alpha male, I have abundant confidence, but in a situation like that I would defer to Ronnie and the guys who visualised it. But as I was watching these guys playing their guitar solos, I was thinking: “Fuck, I could outdo that shit!” They played good, but they didn’t have any honest-to-God Motown black motherfucker on there, and I should have been. I was like, you gotta be kiddin’ me!

Eddie Ojeda: I remember Ted Nugent saying: “If you let me play guitar on the track them kids won’t be hungry no more.” They put my solo in between Yngwie Malmsteen and Neil Schon, who were both playing incredibly fast, and I thought it worked kinda cool.

Mark Stein (organist, Vanilla Fudge): I recall standing next to Yngwie while he was playing his incredible guitar, and later Neal Schon, listening to his soulful playing as well. Both totally opposite in style but both great.

Vivian Campbell: When I had to do my guitar part, I was so fried and burned out – it was the last thing I was prepared to do. I was a hundred per cent in organisational mode… Mr Congeniality all day. Really, the whole scene was very Spinal Tap. It was almost beyond parody.

Ronnie James Dio: The guys from Spinal Tap had Yngwie in stitches, and they were making jokes about him. Somebody asked: “How do you spell Yngwie?” And one of them went: “A-S-S-H-O-…”

Vivian Campbell: I’ve never done coke in my life, but this was LA in the 1980s…

Wendy Dio: I didn’t see any drugs at all. Ronnie didn’t do drugs except maybe a little bit of pot occasionally. People knew he wasn’t into drugs, so even if they did drugs they wouldn’t do anything like that around him.

Ted Nugent: There was a big group photograph taken, and there was a bunch of legendary players there, but I didn’t notice any vying for position. I’m right at the back. I just waited for someone to tell me where I should go and that’s where I went.

Wendy Dio: Getting all of the permissions delayed the single into the start of 1986.

Vivian Campbell: I think we lost a little impact because of that.

Wendy Dio: After it got released, some people criticised the song because the lyric said: ‘We are stars’. People took that to mean rich rock stars. But what Ronnie was saying was that we are all, everybody, stars. It says we are all stars of the universe, we can all make a difference.

Vivian Campbell: The message in Ronnie’s lyrics was that we are all stars. Everyone is equal, therefore no one should be hungry.

Paul Shortino (vocalist, Rough Cutt): Unfortunately, all that stuff that everybody did didn’t do a damn bit of good for the people in Africa. Most of the food sat on the docks rotting because of their government.

Ted Nugent: I’ve been going to Africa on hunting expeditions since 1978, and I guarantee that everybody at Hear ’n Aid combined didn’t feed as many Africans as I’ve done. I’ve shot dozens of big-game animals with my bow and arrow, and all of the meat goes to the villagers. I estimate I’ve brought over a million dollars, with the hunters I’ve booked, into Africa, and all that money finds its way into conservation programmes and directly into the villages where we hunt.

Wendy Dio: It’s a never-ending battle. I was in Casablanca a few weeks ago staying in a five-star hotel, but right across the street people were living in, like, mud huts. And I couldn’t handle it. There’s no middle class, you go straight from filthy rich to incredibly poor, and the rich don’t want to give to the poor. They’re very happy in their luxurious homes.

Vivian Campbell: The bottom line was the money we raised. We did it for the right reasons, but it also proved that even in the decadent eighties there was a positive side to rock’n’roll people. Well, as long as there was free cocaine, some people could be goaded into anything.

Sales of the Stars single, a subsequent album and other merchandising items enabled Hear ‘n Aid to raise a reported $1m in its first year, and Wendy Dio estimates that more than $3m was eventually brought in. Aware that much Band Aid money had gone astray because of government corruption, the Hear ‘n Aid profits were used to buy and send agricultural machinery.

In 2004, Stars was voted the Number One moment in VH1 TV special Most Metal Moments.