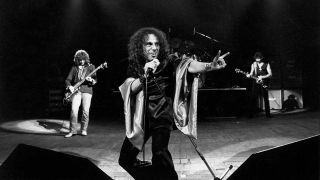 In the summer of 1979, the unthinkable happened: Black Sabbath fired Ozzy Osbourne. Ozzy had been out of the band before, quitting in November 1977 before rejoining two months later. But this time there was no going back – not, at least, until the original Black Sabbath reunited in 1997.

This is the story of what happened, told by those who were there.

Geezer Butler: “It hadn’t been working with Ozzy for ages. Ozzy needed to go away and get himself together. He’d already left a couple of years before that anyway. It was a band just dying.”

Tony Iommi: “We managed to scrape together the last album with Ozzy, Never Say Die. That was the end. It was desperate. The songs were all over the place.”

Geezer Butler: “Ozzy just wasn’t interested in doing anything. Tony and me and Bill were working on stuff. We had to. The record company was paying for everything, so we just carried on.”

Tony Iommi: “All that time, it was me going to the record company – ’cause nobody else would go! – and they’d say, ‘How’s the album coming along?’. ‘Oh, all right…’. It was getting really desperate, but the record company didn’t understand why we would split with Ozzy. ‘Why break up? Why not just continue and make money?’ They didn’t see it from our side – the musical side of it.”

Geezer Butler: “When we finally made the decision about Ozzy, Tony said he’d been talking to this great singer. Ronnie came over, we played Children Of The Sea, this blues song we were doing, and we thought, ‘Bloody hell!’. We’d been sitting there for six months with absolutely nothing, and Ronnie comes in and just nails it straight away.”

Tony Iommi: “It was a new lease of life.”

Ronnie James Dio: “Children Of The Sea was the first thing that I was presented with. I don’t audition – I’m confident enough in myself. But it was somewhat of an audition, for all of us – I auditioned them, they auditioned me. I knew we could be great together. But I’m a different animal to Ozzy, of course. I think in different musical terms, so it led us in a new direction. We were creating this album together, and it was important that it be that way. I didn’t want to be replacing something that Ozzy would do, but luckily, he hadn’t been doing anything, so it wasn’t a problem.”

Tony Iommi: “I’d heard the Rainbow stuff, so I knew what Ronnie could do.”

Ronnie James Dio: “I don’t want to be negative about Ritchie [Blackmore], but in Rainbow it was sometimes very difficult. Ritchie and I wrote some great songs, some really wonderful things, but Ritchie is a genius and he has a very single-minded attitude. With Ritchie, you kind of have to sing over what he wanted to give you. I learned a very difficult process of singing over his riffs most of the time – he just kept on playing them!

"Tony is a genius in his own right, but he and Geezer gave me so much more latitude, so much more space for expression. It was just wonderful for me. That was really the big difference. Plus, personally, it was great. I might not be British, but it didn’t make any difference. I came from a working class family the same as they do. So we were able to relate on those terms – it was all about the music.”

Tony Iommi: “During the recording we moved from the studio [Criteria in Miami] to a house in Bel Air. We converted the garage to a studio, but it was so bloody hot in there we had the gear set up in the house! And that’s where we wrote the song Heaven And Hell, sitting in the lounge, jamming. It was one of those songs that just built up as we went along. “For me, it felt like there was more room to play on that album, and that song is a good example of that.”

Ronnie James Dio: “We had all of these great songs – Heaven…, Children Of The Sea, Lonely Is The Word, Die Young – but we needed one more to complete the album. Geezer and Tony and I went to Jersey but unfortunately Bill’s dad died at the time, so Bill stayed in Britain. And it was in Jersey that we wrote Neon Knights.

“We knew what we wanted to do. It had to come up to the standard of those other great songs. We recorded it in Paris in a studio [Studio Ferber] where nobody spoke English. Martin Birch, our producer, barely spoke English – and the rest of us weren’t very proficient at the time either! We went in and knocked it out and there it was – Neon Knights!

"Our feeling was, ‘Phew, thank God it’s over!’ It took us a long time to make that album, and we met a lot of resistance along the way from a record company that probably, at that point, didn’t believe in the band. Bill was wonderful at that time. He would always go to the bank with his little briefcase and he made friends with the woman who was trying to help us out.”

Tony Iommi: “Bill turned into a businessman. Well, he thought he did anyway! To be honest, at that time, all ties had been severed with management. We were on our own.”

Ronnie James Dio: “The album itself was a success based upon what we did, and not so much with a record company giving it its full shove behind it. It was a word of mouth thing. And then, of course, after the album started selling, the record company discovered us! The hard work was done by us.

"But in the middle of the tour, Bill left the band. We were in Denver, having a meal. There was a show the next day at a stadium there – the tour was massive at that point. And we got a call, and I don’t know why he asked for me, but it was Bill, and he said, ‘I’m leaving. I’m going home. I can’t take it anymore. I don’t wanna be on the road.’ ‘But you can’t, Bill – we have a show to do tomorrow!’ But he just said, ‘I’m going home, I’m on my way right now.’ And he left.

"So we had to sneak out of town and had to make up that show at another point. We went back to Los Angeles, and that’s when Tony called me and said he had this album by a band called Axis and the drummer was Vinny Appice…”

Vinny Appice: “I met everybody and then we played and I tried to do my best. I guess it was good, because everybody else went to the bar!”

Tony Iommi: “And that’s while he was playing!”

Vinny Appice: “I kept playing and two hours later they all came back!”

Ronnie James Dio: “We thought, ‘Great, this is our guy.’ I was so happy and got so loaded that I got arrested that night. I drove home and got arrested. Spent the night in jail in the San Fernando Valley, California. I was in a cell and most of the people in there were Mexican.

"They were all sitting on this bench and this one giant Mexican guy got up and said to another guy, ‘Gimme a cigarette!’ The guy went, ‘I don’t smoke.’ And boom, the big Mexican punched him out! Then he went to the next guy: ‘Gimme a cigarette!’ Same reply: ‘I don’t smoke.’ Boom! So it’s coming around to me, and I didn’t smoke either. But when he got to me he said, ‘I know you.’ I thought, ‘Please let him know me!’

"Luckily, we’d played at the Los Angeles Coliseum on that tour, 100,000 people, and this Mexican guy he was in the crowd. He said, ‘You’re in Black Sabbath!’ Then he turned to the guy next to me and said, ‘Give him a cigarette!’. The guy gave me a cigarette – and I smoked it!”

Tony Iommi: “We had three or four days to rehearse with Vinny before we went to Hawaii to another stadium.”

Geezer Butler: “The crowd in Hawaii were mental. There was a big fire in the stands. Somebody set a mortar off that landed backstage. And apparently there was a sniper outside the stadium, shooting at people as they were leaving!”

Vinny Appice: “To get me through that first show, I had a book with instructions – like, ‘verse two, speed up.’ And halfway through the show it started raining, and it went on the book! I’m like, ‘Fuck!’ I had no clue how to get through the songs. The endings were a little long…”

Tony Iommi: “That gig was nerve-wracking! But we got through the tour and the album did really well for us. I love Heaven And Hell. A lot of musicians out there got into Sabbath through that album.”

Ronnie James Dio: “Dave Grohl is a great guy, so genuine, and he always says the same thing when we meet: ‘Oh, Heaven And Hell, it’s wonderful!’. It’s an album that we’re all very proud of. We wrote great songs and we presented them very well. It was not Black Sabbath with Ozzy – it was something new, and it just worked.”