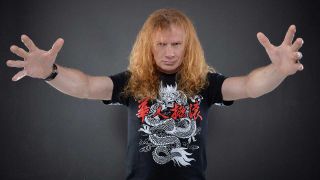 Year on year, the tedious 'rock is dead' statements are wheeled out. Everything we once loved is now, apparently, 'dead' – the album, live music and, of course, rock radio. Music fans might as well give up now, right?

Mainstream radio doesn’t play rock music anymore – certainly not metal music, or any of rock's more challenging, avant garde cousins – and as we reported last year, there's little chance your band is going to get radio airplay. There's nothing on the air for real rock fans, or so it seems.

As we pointed out in our article, commercial radio is at the mercy of market research, heads of ‘content’ and advertising cash. Mainstream radio may no longer be a viable tool to access or promote rock music, but discounting radio's power altogether is a blinkered view that ignores what radio has become in 2019.

Developments in technology have enabled an explosion of niche radio across all genres, worldwide. There’s everything from a female collective promoting the best of women in alternative music to a station based in a record shop in Zurich and an international station exploring underground sounds from all corners of music.

The same is true for rock radio, where independent and internet stations cover everything, catering for the broadest of tastes to the most mind-warpingly niche. Rock radio is alive and well, it's just on us to discover it. Technology has taken the power from commercial gatekeepers and advertisers and handed it back to fans and those passionate about rock music. Rock radio is in our control and it's better than it ever has been.

The ease of setting up your own station – anyone with a basic microphone and a laptop can record a show and bang it up on Mixcloud, a platform that covers all artist royalties and pays successful creators –  has seen the breadth of rock shows grow by the day. With titles like ‘Stoner Witch Radio’ and ‘Hour Of The Riff' broadcasting regularly, you can rest easy in the knowledge there's always some serious riffage to delve into on the airwaves.

To get to to the heart of rock radio's outsider explosion, Louder took a closer look at the current state of radio and found that the reality is actually pretty positive for rock stations. In a world where niches dominate, where commercial radio is dying and streaming has made things cold and impersonal, music curated and presented by a trusted human voice has more value than ever. It's simple: listeners want to connect with DJs and other like-minded people whose tastes and opinions they trust.

One such station is Gimme Radio. A metal-focused station and subscriber service based in the US (but starting to make serious waves in Europe, too), the station has a freeform, non-playlist approach to music, with shows helmed by passionate, big name hosts including Megadeth’s Dave Mustaine, Lamb Of God's Randy Blythe and Johan Hegg of Amon Amarth.

“The idea that radio is a dead format, I don’t believe that," says Albert Mudrian, Decibel magazine editor and another of Gimme’s roster of DJs. "I think that things that are actually curated by humans and no algorithms are still a worthy, interesting piece of culture. I mean, I can listen to Gimme Radio and those dots that are connected within a show, a two hour show of somebody’s playlist, you really feel like somebody is looking out for your best interests, an actual human being trying to put together a mix for you."

“There is definitely a different feeling from the curation from a human being and a computer," he adds. "I don’t know if generations younger than me get that, but I do know it speaks to me in that manner."

With presenters and listeners completely in control of the music, deep-dives into metal's less accessible corners – including album tracks and an abundance of new music – are not only possible but, actually, expected.

“We’ve got this really great place to stream music, to get royalties to the bands, interview the bands – bands that people would just not hear, even on satellite radio some of these bands wouldn’t get the time of day," Dave Mustaine tells us. “We really are thinking about the fan. It’s not about seeing how big this can get, about getting sponsors, selling advertising, selling it out. It’s about the music.”

Around 50% of the music played on Gimme Radio is new stuff from established acts, but you're likely to hear pretty well anything, right down to the first demos from the deepest underground bands.

In this situation, it's easy to put concerns about shadowy, money-driven executives curtailing access to the music we want to hear in the past. But with access to almost every song imaginable available on your own terms via streaming services, why does radio still matter? Well, one station believes it’s all down to community.

Community is the key ideal behind Primordial Radio, a crowd-funded rock and metal station with a subscriber community of over 1,400 rock diehards each of whom pay £6.99 a month, or £60 a year, to become members. When a group of rock fans felt they weren’t getting what they wanted from conventional stations, they joined together to create their own platform.

Hugh Evans – aka Moose, Primordial’s CEO – explained where his station, launched in 2017, is coming from. “I get that Spotify and Deezer can give me exactly what I ask for based upon my unique tastes," he explains. "The problem with that is I go through that whole experience on my own. Just because I am fiercely independent doesn’t mean I want to be on my own. Radio brings people together and I would say social trends and change in consumption habits is a huge opportunity for rock radio to change the landscape and cater to very specific, loyal groups."

"Our community is our boss and paymaster and we answer and report to them alone," he adds. "We are free of the restrictions of advertising, content deals, and regulatory censors.”

This mirrors a new kind of radio experience which suggests it's no longer a passive medium. Gimme, and many of the new breed of stations, consider this to be a core element of what they offer. But they also allow listeners direct access to DJs like Dave Mustaine, and give those DJs the freedom to share what they have to say.

“I love telling stories about all this stuff and I also get the chance to clear up some of the stuff that people have questions on," says Mustaine. "Some of it is true and some of it is not true, so it’s really great to have a platform to help clear the fog for so many people.”

The conversation is no longer a one-way thing. While Gimme’s DJs are on air, fans can connect directly with them. They can also chat about whatever's on their minds directly with each other. It’s a paradigm shift between fan and rock star, says Mustaine. "It is a little strange, I must admit, because if you had told me when I was a kid that I would be chatting with Jimmy Page or Jimi Hendrix I would say 'You're crazy!' The opportunity now to be able to have this platform to talk to people, to share with them, to chat [is great]. When they have their handles, their user names or whatever, a lot of that is about who they are.”

And the DJs do listen. “To some degree [there's a lot more interaction] than terrestrial radio," Will Carroll of Death Angel, and another Gimme DJ, says. "I take suggestions all the time from the chat and apply them to future shows. At the same time, I’ll purposely put on a stinker of a song just to get the listeners riled up and chatting away. There’s definitely a humour element to my show – something you don’t get too often in metal.”

This all sounds like great news for music fans, but one of the biggest issues from detractors is the lack of access new bands have to radio airplay. With Primordial, Gimme and countless Mixcloud curators at the helm, this is no longer a concern.

“Oh man, if Gimme was around in my demo days it would have been a different ballgame," says Carroll. "Many DJs, including myself, play unsigned, unheard bands. And by doing that the band has just been exposed to listeners all around the world. It’s very effective. More young bands should get wise.”

Instead of lamenting how the radio of the past isn't giving you what you want, it's time to embrace the idea that you have the power: the power of choice, and that your choice is powerful. Mustaine believes that the listener now has more choice than ever: "I believe they have the power of choice," he says. "They can disconnect – there are a million, even a billion alternatives right now.”

These alternatives include some of the most exciting rock radio that's ever existed. Sure, you can focus on the dwindling amount and scope of traditional stations, who won’t play what you want and certainly won’t play your band, or you can ignore it and seek out the stations that will offer you what you want.

There’s a world of fan-owned, vibrant rock stations put together by knowledgeable, fanatical DJs out there for you to explore. Radio that you can shape with your tastes and opinions, where you can connect with fans and rock stars alike. There’s even nothing stopping you from making your own show. It’s there for the taking. All we have to do is seek it out and embrace it.