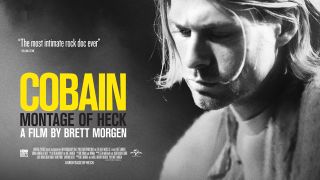 Since his death 21 years ago, Kurt Cobain has been eulogised and mythologised in unprecedented ways – to levels he would’ve undoubtedly been extremely uncomfortable with. Now, with the release of the first fully-authorised Kurt Cobain documentary, the world will at last be offered a true insight into the man behind the myth: the artist, the husband, the father, the son.

Out this week, Cobain: Montage of Heck interweaves interviews with friends and family members with never-before-seen home movies, family photos, recordings, artwork, journals, and fantasy animation sequences. It follows Cobain through childhood and the troublesome teenage years to his ultimate rise to fame as the frontman of Nirvana, before his tragic and untimely death on April 5, 1994.

On the eve of its release, we sat down with writer and director Brett Morgen to find out more about what critics are calling ‘the most intimate rock doc ever’…

**What did Nirvana mean to you growing up? Did you ever see them perform live? **Brett Morgen: “Well, I’d seen them play in 1990 at Hampshire College where I went to school, and I saw them again in 1993 on the In Utero tour at The Forum, which was their second last show in LA. But musically, Nirvana was no more significant to me than the Meat Puppets, Hüsker Dü or the Minutemen. I grew up in that same period as Kurt listening to SST Records – I’m blessed that I grew up in LA in the ‘80s for that sole reason.

“Culturally though, Kurt had a tremendous impact on our generation. You’ve got to understand that for 12 years my life was this; I started seventh grade and it was Ronald Reagan, and when I graduated High School there was Ronald Reagan, and when I graduated college there was George Bush. So I grew up under this cloud of Reagan and Bush. And whenever you put on television you saw The Cosby Show, or something else that you just couldn’t relate to. And then when Nirvana broke, this entire generation of kids found something that they could relate to.”

**Would you say Nirvana was the first alternative band of your generation to cross over into the mainstream? **“They weren’t the first band to break, no. Before them, there was Jane’s Addiction on Warner Brothers, who sold a ton of records before Nirvana. But you couldn’t turn on pop radio and hear Jane’s Addiction the way you could Nirvana, and suddenly for the first time it felt like we were taking over. So culturally they were very significant, but I didn’t think much of them at the time beyond that.”

**Then what was it that drew you to this project? **“I didn’t approach the Cobain family about making this film. They came to me with it. They’d seen my movie The Kid Stays In The Picture about Robert Evans, which at the time it came out was considered quite groundbreaking in its presentation and experimentations with the form. In many ways it was one of the first digital documentaries. All I had to work with were digital photographs, and we figured out a technique to bring them to life, which has now been appropriated and actually has a technique called ‘The Kid Stays In The Picture Effect’. So Courtney [Love] saw what I could do with the camera and art, and thought that I would be a good fit for Kurt. I don’t think she had any idea how personal this story would be for me on a human level.”

Does that mean you can relate personally to Kurt Cobain, in a way that goes beyond listening to the same punk rock bands growing up? “Absolutely. This generation that I’m a part of; we were the first latchkey kids in America. And it was a very specific generation. If Kurt Cobain’s parents were five years older, they would’ve never got divorced. And if they were five years younger they would’ve never got married. So here you had this one generation that felt obligated to get married, but felt liberated to get split up. It’s like Wendy [Cobain, Kurt’s mother] says in the film, ‘Is this it? Is this all there is?’ That’s a very 1972⁄73 idea. And I had that same experience. My parents separated when I was 10 years old and went to work in different towns. I had that same sense of abandonment my whole life.”

**Morgen with Frances Bean Cobain and Courtney Love at Sundance in January 2015 and right, a promotional poster for the film Photo: Tommaso Boddi/Getty Images for HBO **

So in many ways this is a story that people who’ve never even listened to Nirvana’s music can relate to… “Like all films and all work should be. As an artist, the weird thing about doing biographies is they’re about other people, but really they’re about yourself. There’s always stuff that I’m drawn to in my subjects, and stuff that resonates with me. You’re going to be drawn to something different. But Courtney could never have known any of this because she didn’t know me. She had no idea how personal Kurt’s story was to me, not just the upbringing but also as a father. A good friend of mine who’s known me for 20 years saw the film and she said, ‘There’s no way you would’ve made the same film before you had children.’ And she was right. There’s no way I would’ve been in sync with the family origin story in that way.”

**Would you even describe ‘Montage Of Heck’ as a music documentary, then? **“It’s not a music documentary at all. It’s a movie about a boy. We bypass all of the troupes and clichés of the biopic – the first time he hears his song on the radio, signing that first contract, all that stuff – because all of that really has nothing to do with Kurt’s emotional journey through life. It’s all relevant for a story about Nirvana, but we were never doing a story about Nirvana. We were doing a story about Kurt. And I hate to say it, but that’s much deeper than a band. The band’s relevant in terms of being Kurt’s most significant creative endeavour, so Nirvana is critical for that purpose, and also in terms of how it shaped his life experiences. But I feel a closer comparison for this film other than a music documentary would be Boyhood (Richard Linklater’s coming-of-age drama), in that you’re just going on this journey with the kid.”

And we really do go on that journey with him. Was that your intention from the start – to show the world the man behind the myth? “Listen, I had probably the same feeling you did going into this film, which is, ‘what else is there to see?’ There’s been all these movies, there’s all these books, especially for a guy who was only in the public eye for such a short space of time. I understand all the cynics who are like, ‘For chrissakes, another Cobain story. Can we put it to rest already?’ I get that. I felt very much like that coming into it. But once I unearthed all this material, I realised that what we had seen and what we had access to before this film was very limited, and there was a whole other side of Kurt that we were about to experience.”

**You were the first person ever to be granted full access to the Cobain family’s archive, which you use to tell his story. Is there a certain pressure that comes with access to something of that scale? **“Part of what was frustrating to me as the film was finally coming together was that I just wanted to release it and get it out there. I felt selfish, man. I couldn’t tell people that Kurt did a cover of The Beatles’ And I Love Her until the movie had revealed itself at Sundance Film Festival. ‘Why should I have the right to be able to listen to this? You should know about this too, you’re a fan.’ That’s how I felt. But what’s really exciting is that to celebrate the release of my movie, we’re going to release a song publicly for the first time since _With The Lights Out _(2004).”

And for those of who think that there’s nothing left to experience, you’re going to be in for quite a surprise…

Cobain: Montage Of Heck will be released in UK and Ireland cinemas on April 10. A DVD and Blu-ray release will follow on April 27.