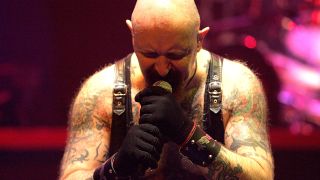 “Some bands hit a mark and then fade away,” says Judas Priest frontman Rob Halford. “While others live on their past glories. But Priest continue to forge ahead. We firmly believe there’s always another great moment to achieve.”

What prompted you to make a concept album about Nostradamus?

Rob Halford: [laughs] We did find out, I think, that he was actually a metallurgist, and an alchemist too. He dealt with that metal world. And that was kind of a surprise to us. But the real story is that at the end of the tour for Angel Of Retribution, in 2006, our manager, Bill Curbishley, met with the band to discuss what we were going to do next. He knew we’d been talking for many years about doing a concept record, and he put it out there: a project centered on Nostradamus. It was a complete surprise. But we ran to it because we all knew bits and pieces about the man, in particular the prophecies.

There’s been some talk about staging the album as a full performance piece.

RH: We’d like to do that. But first we have the Metal Masters tour, so we’re probably looking at doing something next year, because it will take a long time to put a production like that together. We want to do a really spectacular stage presentation, where people will be stunned not only by the performance of the band but also the visual experience.

As far as the Metal Masters tour is concerned, will you be resurrecting any buried classics for the set?

RH: We’ve been talking about it. I mean, we’ve played Breaking The Law, Victim Of Changes and You’ve Got Another Thing Comin’ millions of times. And sometimes you say: “Do I really want to go out and play this again?” But the fact is that once you dig into it and the fans are living it with you it’s like you’re playing it for the first time. Plus, if we didn’t play those songs there are the fans that would be upset. And we’ve all got our favourite songs that we always want to hear. When I got a bootleg of the recent Led Zeppelin show in London, I wanted to hear Stairway To Heaven, you know? That’s the way our fans feel about our music. It’s one thing to have your favourite song playing on your iPod, but when you hear it live it’s the greatest feeling in the world.

Any songs in particular?

Glenn Tipton: Some of the ones we’re discussing for this tour are Hell Patrol [Painkiller], Devil’s Child [Screaming For Vengeance], Dissident Aggressor, Sinner [both from 1977’s Sin After Sin], Rock Hard Ride Free [1984’s Defenders OF The Faith]…

RH: We’d just finished our own tour when we got word from Robert Plant, who knew we were in the States. He basically said: “I know you guys are done, but Zeppelin are doing two Bill Graham Day On The Green events in Oakland. Are you interested?” So we said: “Of course!”

Those two gigs really helped break us on the West Coast of America. For that reason alone we didn’t want to pass up the opportunity. But mostly we did it to play with Zeppelin, who were incredible. It was the last two American shows they did with John Bonham. We’ll never forget it.

Did you listen to any classical or opera for inspiration and ideas?

RH: We know everything there is to know about metal riffs and metal guitar, so we were looking forward to the opportunity to open our minds to other styles. When I went to work every day for the writing sessions, all I listened to was classical music. And I listened to people like [Luciano] Pavarotti and other classical operatic singers, just to stimulate my mind.

That explains your singing in Italian on the song Pestilence And Plague.

RH: And I speak in French at the end of the album. That was all in fun. We had a good time making this record. It was a difficult album to do just because of the amount of material, but it never became a chore.

**To my ears, your album _British Steel _really laid the blueprint for what would become the sound of metal in the 80s. **

KKD: Yes, well that’s a very simple and straightforward record. It’s stripped-down and direct. And we were under some time constraints with that one. We had just come back from Japan and the label wanted another album. So the songs just burned out of us. I think British Steel has become pivotal to a lot of other metal musicians. A lot of people cite that as an influential record.

On the flip side, many fans regard your 1981 album Point Of Entry as a mis-step.

RH: It depends how you interpret the word ‘mis-step’. I think each record is as good as it can be at that moment in time. As long as you feel you’re advancing, that’s what it’s all about. And you know, I don’t think there’s one song Priest have done that makes me take a sharp breath.

Returning to today, there’s currently a lot of discussion about the death of the album format, and how listeners are interested more in individual songs. And here come Judas Priest with a two-CD concept album that’s also coming out as a triple-vinyl set. That’s pretty…

I was going to say ‘bold’, but let’s go with your word.

GT: [laughs] Well, it really shows what Priest are all about, doesn’t it? We do what we want to do. We’re not in it for the money – and nowadays, with downloading and all that, there’s not too much of it anyway. Though we are hoping that people will take Nostradamus as a whole, and that includes the packaging, the art, the complete story. We know that’s against the odds, but we’ve always been brave enough to give it a try and to go where no man’s gone before.

Judas Priest certainly weren’t the first to record an album or a track called Nostradamus, and they almost as certainly won’t be the last; unlike the 16th-century French prophet himself, we can’t see into the future. But we can look into the past, and we do know that among the Nostradamus-related albums and tracks to have been released are a Nikolo Kotzev’s Nostradamus (A Rock Opera) in 2001; Nostradamus, a studio album by proggers First+Aid from 1977; American death metal band Divine Empire’s 2003 album Nostradamus. Have a nose around on the internet and you’ll definitely be able to find more.