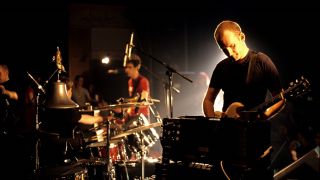 Salad Days, a film that documents the bands and characters associated with the Washington D.C. hardcore scene between 1980 and 1990, premiered in New York City on Friday (November 14) to a sold out audience at the SVA Theatre in Chelsea.

The film, named after a Minor Threat song, charts D.C.’s thriving underground punk scene, from the early days of hardcore legends like Bad Brains and Teen Idles, all the way up to the enraged third wave feminism of riot grrrl and the international success of Fugazi. The path in between covers everything from Minor Threat’s invention of Straight Edge, the explosion of political activism prompted by the now-legendary Positive Force house and the development of “emo-core” by Rites Of Spring, Marginal Man and Jawbox in the late ‘80s.

Importantly, Salad Days provides up-close-and-personal insight into a scene that has been both romanticised and heavily criticised over the years. What emerges is a vivid snapshot of what D.C. music was really, truly about during that fraught decade, against the back-drop of a city undoubtedly in crisis after two decades of political unrest and violence.

The bluntly honest and insightful interviews with key scene players like Henry Rollins, Ian MacKaye and Dave Grohl – as well as with lesser known figures from bands like Void, Government Issue, Faith and many more – clearly map out the importance of this period for underground music, while also showing up how shambolic and unstructured it could be at times, especially during the years where everything was being organised by unruly teenage punks.

Some of the insider tales here are both jaw-dropping and hilarious. Most notably, there’s a very funny, uncomfortable, on-camera confession that the rest of Minor Threat broke up with vocalist Ian MacKaye via a hand-written note. Funnier still, is MacKaye explaining that he still receives prank phone calls from drunk punks who want to yell at him about how rubbish being straight edge is. (“I’m 50!” he protests.)

Liberally dispersed between the interview clips is astounding, oft-gritty live show footage that has, for the most part, never been seen outside of the filmmakers’ own living rooms, until now. It is a stark reminder of how, before the advent of the internet, music communities cultivated themselves on a localised, very personal level, and also acts as startling documentation of Washington D.C. in much darker, more impoverished days – Minor Threat’s last show, for example, was held in an abandoned and condemned department store.

Ultimately, the importance of Salad Days lies in the fact that it’s an essential reminder of just how much can be accomplished when creative and marginalised young people take matters into their own hands. D.C. hardcore’s story is ultimately one about the sheer productivity and community that can spring up from isolation and alienation. The message of this film is ultimately a very inspiring one: Don’t wait for anyone else – if you want something done, if you desire change, you have to do it yourself. Salad Days acts as a handbook of how to take control in these ways, and it’s a valuable example that sometimes the most amazing things come from the most unexpected places, prompted by the most unlikely of people.