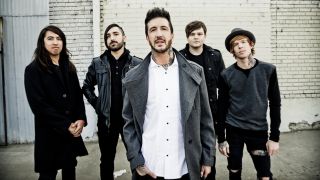 Rarely does KOKO offer a bill of such front-to-back interest as it did when Of Mice & Men rolled into town – all three bands in show being subject to varying levels of Next Big Thing talk. Here's five things we learnt when we braved the huge queues to check out this stacked line-up.

BEARTOOTH ARE GRABBING THEIR OPPORTUNITY BY THE SCRUFF OF THE NECK

With a super-early door time tonight, Beartooth find themselves on stage while the sun is still blazing outside. Nevertheless, the band refuse to be here to just make up the numbers and deliver one of the best opening sets that this, or any venue has seen for a long time. They serve up their dexterous, no-frills, swaggering modern metalcore with balls out fury; diving off amps and into the crowd with blatant disregard for their own safety. Frontman Caleb Shomo feels like he has been around this scene forever, but if this isn’t the band he finds genuine success with, everyone who bore witness to them this evening will be astonished.

Before we get on to how the Pasadena sextet fair musically tonight, a special mention needs to be given to Issues vocalist Tyler Carter’s clobber this evening. Bounding on stage in pleather trousers and anoversized paisley tshirt, he looks more Kanye West than East Bay Hardcore. Carter’s pop-star credentials are no secret whatsoever but good lord, his get up tonight is absolute shocking. Sort it out, son!

HIS BAND ARE DELIVERING THE GOODS, THOUGH

Few acts ever experience the bubble of hype that Issues have in recent times, but the nu-metal revivalists seem to be dealing with the weight on their shoulders with ease. Their patented R’n’B mosh assault keeps the dancefloor at KOKO bouncing for the duration this evening. Indeed, even if tonight’s setlist choice seems a little odd (not even half of these songs are from their new self-titled album) they do more than enough to satisfy fans’ appetites. When the inevitable headline shows come, they will be more than ready.

OF MICE & MEN ARE MASTERS AT INDUCING BEDLAM

From the very first second that Austin Carlile walks on stage tonight, the noise is deafening, the vortex of bodies in the pit is churning and the excitement is positively overflowing. Screaming into view with Public Service Announcement, the band offer up destructive battering rams of noise punctuated by shin snapping breakdowns and Aaron Pauley’s dulcet singing voice with well-oiled ease. OK, Bones Exposed still sounds like a Bring Me The Horizon song with a Yankee accent but you can’t argue with the commitment with which these tunes are punched into the awaiting throngs collective face.

Having sold this show out long in advance, the future for Of Mice & Men lies beyond KOKO’s beautiful, theatrical but ultimately mid-sized surroundings. A mere glance at tonight’s stage set up tells you as much – the monumental drum riser, the industrial lighting rigs, the steel grated plinths from which Austin delivers his vicious roars – these are the trappings of bigger shows in bigger venues. Hopefully they will be able to take the bloodshot intensity that made this evening’s proceedings so compelling with them - but inexorably, that the only way is up for these Californian kings.