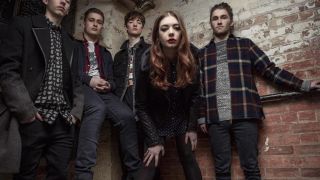 Here's five things we learned when we went to see the West Yorkshire quintet crush the capital...

TURNING UP TO GIGS EARLY IS OFTEN A GREAT IDEA

Tonight’s openers Bovine are good. Really good. Their swirling, gelatinous riffs are doled out with an understated efficiency and they simply let their towering music do whatever talking needs to be done. For all their Mastodon prog-isms they are shot through with a healthy dose of Thrice-esque emotional blood-letting and it is this resonance that allows these songs to rise and fall with the hypnotic ease that they do. A capacity to fire both hearts and heads this evening clearly marking them out as ones to watch for the future.

FLAILING ABOUT DOESN’T AUTOMATICALLY MAKE YOU A GOOD BAND

Conversely, Hull’s The Colour Line appear to have bought _The Big Ladybird Book Of Mathcore _but been distracted by something shiny after page 1. Anyone can lob their guitar around on stage but unfortunately the quintet’s performance has any sense of danger or confrontation well and truly choreographed out of it. The furious energy is presumably designed to paper over the yawning cracks in their musical output: in places this is so derivative that you wonder what Ben Weinman’s lawyer would make of it. The sort of substance-less bluster that would impress someone who has never heard a Botch album.

THE HYPE MILL IS IN OVERDRIVE FOR MARMOZETS

Make no mistake, there are a lot of people who want you to believe that Marmozets are the next big thing, and as the band walk on stage the buzz that has surrounded them for the past couple of years feels like it has reached fever pitch. Indeed, what is eminently apparent from the very first note is that they are an enormously able musical unit who are charismatic beyond their years. Of the boys in the band it is the MacIntyre brothers, Sam and Josh, who stand out. Their porcelain, shrew-like features belie an aching rock ‘n’ roll cool and each delivers a fizzing, vivacious performance tonight.

BECCA MACINTYRE IS A MEGASTAR IN THE MAKING

The real weapon though is Sam and Josh’s sister, Becca. Much has been (and no doubt will continue to be) made about the significance of having a young woman fronting the hottest rock band in the UK, but casting that kerfuffle aside for a second she really has got an astonishing voice. Leaping between Hayley Williams melody and Eva Spence roar at headspinning pace she puts on a beautifully skittish yet subtly sultry show. Her railing against the notion that girls need to take their clothes off to be taken seriously in the music industry before new song Cover Up tells you all you need to know about how vital a spokeswoman she could become.

Marmozets are in a bit of a limbo at the moment. With a new album slated for a September release, tonight’s set is comprised mostly of new material that the majority of the room have never heard before. It is therefore all the more noticeable when familiar songs like Why Do You Hate Me and Move Shake Hide get such rapturous response the prospect of this band coming armed with an arsenal of choruses that everyone knows every word to is frankly a little frightening. These considerations don’t matter by the end though, as the band drag their drum kit out to the middle of the dance floor and bang out a shamanistic rhythm while crowd surfers fly from every angle. Are Marmozets the finished product yet? No. Are they going to reach the heady heights they are being widely tipped for? On this evidence you wouldn’t bet against them.

Marmozets will tour the UK in April/May. The band have also confirmed upcoming appearances at Slam Dunk festival, Download and Reading/Leeds.