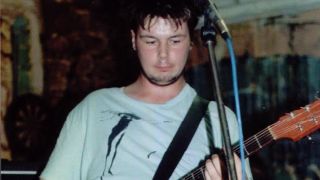 The UK punk scene has been mourning the death of Richard ‘Dickie’ Hammond, guitarist for Leatherface, who died at the age of 50.

Hammond was a well-respected and much-loved guitarist, whose contribution was key to a sound that influenced a generation of melodic punk bands in the 1990s and beyond, with artists such as The Gaslight Anthem and Hot Water Music citing them as a major influence.

Hammond had already made a name for himself in the punk underground with HDQ when he joined the band formed by frontman /guitarist Frankie Stubbs. An acronym for Hung, Drawn & Quartered, HDQ released three albums between 1986 and 1990, recorded Peel Sessions, and were one of the first UK bands to display a clear affinity with US hardcore bands. Hammond’s guitar work particularly set them apart from their contemporaries, with one fanzine describing them as like “The Ruts with The Edge on guitar, playing Babylon’s Burning at twice the original speed”. HDQ were popular on the European punk/hardcore circuit, drawing crowds of between five hundred and two thousand, and when they split to concentrate on the already-operational Leatherface, it was while headlining a French festival in front of 15,000 people.

Emerging from Sunderland in 1988 at a time when the region was suffering economic recession due to the recent miner’s strikes and the declining shipbuilding industry, Leatherface sounded like a product of both era and place: gritty, impassioned, intelligent, intimidating, gutsy, proud, wistful, anthemic, hard-edged, and industrious. And, yes, occasionally rough as a buzzard’s crotch too. Drawing on the influence of early UK punk bands and with the galvanised melodic power of Hüsker Dü, the live ferocity of Motörhead and with a working class lyrical perspective comparable to a big-hitter such as Bruce Springsteen, Leatherface were the epitome of the cult band.

Punk at the dawn of the 1990s was a fertile, yet fragmented scene that saw acts sharing bills with hardcore, grindcore, crust, metal, thrash, proto-grunge and pop- punk bands – sometimes even newcomers such as Green Day – all existing entirely beyond the mainstream music industry. At the heart of it was Leatherface, and the heart of Leatherface was Dickie Hammond, whose chiming, high-speed guitars existed as a counterpart to Stubbs’. The band’s third full-length album Mush (1991) is widely considered both the band’s pinnacle and a punk classic.

Topped by Stubbs’ distinctively coarse vocals that sounded like a dozen broken bottles of Newcastle Brown Ale being flung into a cement mixer, The Boat (a nickname derived from the cockney slang ‘boat race’) injected a bruised romance and dogged sense of aspiration into punk – sometimes sardonic, melancholic and bloodied, but often celebratory and life-affirming. There was humour in their work too, found in a wealth of cover versions, including Elton John’s Candle In The Wind, Elvis Presley’s In The Ghetto and countless other pop songs given a makeover. Few Northern hard men have inspired such devotion.

Hammond also played in a multitude of bands, including long-standing North East punks Angelic Upstarts and Toy Dolls, as well as Hex, Doctor Bison, Broken Heart Orchestra, Stokoe, Dog Piss, Fatty Jones and The Dipsomaniacs. But it’s his work with Leatherface for which he will be most fondly remembered.

A fund set up to help pay for Dickie’s funeral costs can be found here.