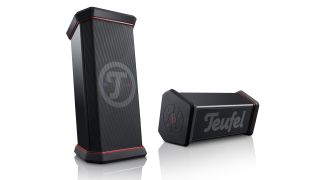 Ah, cassettes. Remember the good old TDK C-90? You could get two complete albums onto a single tape – as long as you didn’t mind losing, say, the last part of 2112.

Of course, strides in technological development have ensured that the iconic Sony Walkman resides in the ‘Where are they now?’ file, alongside VHS players and the ZX Spectrum. Today we find ourselves content with subjecting our lug’oles to tinny mp3 files played through in-ear buds that strip rock music of much of its fondly remembered power. And although it seems vinyl is threatening to make a comeback, the future looks destined to forever have a digital sheen.

So how do you inflict your finely crafted playlists, that have been carefully stored on various devices, to the outside world now that huddling around a double-deck cassette player in the park is no longer a realistic option? We’d suggest the Rockster XS, from German hi-fi dudes Teufel, could be the answer.

It’s a wireless speaker system designed specifically for playing audio outdoors, and its Bluetooth 4.0 compatibility enables you to stream music from all manner of platforms, including tablets, iPods and even smartphones. A really cool feature is Party Mode, where you can connect a pair of smartphones to set up bangin’ rock mixes (it says here), and there’s even an Outdoor Mode that automatically adjusts the EQ to boost mids and highs for improved projection.

Loaded with a pair of 46mm speakers alongside a 100mm passive subwoofer – a combination that kicks out eight watts – the Rockster XS is never short on bass. And its closed aluminium enclosure is fully water resistant, which will protect the innards from rain or lager spillages. You can even hook up a pair of speakers via Bluetooth to have genuine stereo operation.

Take it from us, the Rockster XS is perfect for blasting out Hail To England in the queue at Bargain Booze.

The first commercially available guitar wireless system was introduced in 1977, and all models are based on a simple idea. The guitar plugs into a radio transmitter, usually the size of a fag packet, which sends the signal to a receiver that is ultimately fed into the amps. Their introduction must have been a Godsend to the likes of Angus Young and Steve Harris.

Freedom on stage is one obvious upside, but a serious downer is a perceived change of tone. A cable is actually a somewhat inefficient method of transferring an electrical signal and many players found, somewhat ironically, that the improvement in signal as a result of changing to wireless altered their tone too much. Today’s pro systems compensate for this, and those at the lower end of the market have a ‘cable tone’ option. Going wireless is liberating and worth a try.