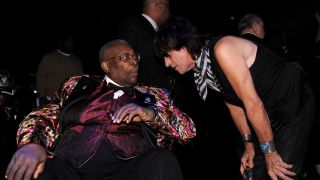 BB King was a living monument to the blues. It’s a story almost too rooted in legend to be true: the cotton-picking Mississippi orphan who hitch-hiked to Memphis, guitar slung over his back, to seek his fortune. His first recordings were made in 1949. And he became rock royalty, recording with everyone from Eric Clapton to U2, releasing more than 50 albums, bagging 15 Grammys and playing an astonishing 15,000 gigs.

Are you comfortable with your image as the Ambassador of the Blues?

I look at it this way. I think Muddy Waters was the Godfather, and since then I don’t think anybody has carried the blues further than I have. When they call me the Ambassador, I’m very proud of that title. It feels like I’m doing pretty good for 83 years old.

Age has never stopped traditional bluesmen from carrying on. What advice do you have for the 1960s generation of white blues players – the Eric Claptons and Jeff Becks of this world – who are now approaching old age?

I know both of them – they’re both great musicians – and I consider Eric a good friend. My only advice would be: “Keep doin’ it, buddy.”

Who was the biggest influence on your own blues playing?

I’d say Robert Johnson, then Blind Lemon Jefferson. I liked jazz too, y’know. I was crazy about Charlie Christian and Django Reinhardt. T-Bone Walker was a part of it as well. But what about Barney Kessel and Les Paul? There are so many of them.

When I would hang around Beale Street, which is one of the most popular streets where black people hang out, it was kinda like a community college. I had a chance to learn many things from people who were just sitting out in the park where it was warm. Some would play, some would dance and some would do many other things I don’t do. I learned a lot.

On the night that Martin Luther King was assassinated, you played an all-night blues benefit in Greenwich Village with Buddy Guy and Jimi Hendrix. What do you remember of it?

I remember it well. In fact I’m still mad with Jimi Hendrix today. He brought a tape recorder and asked us if he could tape it all. He was supposed to give me a tape of it later but he never did. When I leave this earth, if there’s any way I can find him, I will fuss at him about my tapes. I’ll give him a hard time!

In the latter days of his life I thought he was the number one rock’n’roll guitarist, with Eric [Clapton] right behind him. There were a lot of British guitarists I liked. If it had not been for some of those musicians, doors would never have opened for BB King. I toured with the Stones [in 1969] and finally got a chance to record with them. What can I say? You can only have one king on one throne, but they were kings to me. All of those guys, and later U2, did so much for BB King. I remember once when I was opening one of those shows for the Stones, we played Baltimore. Afterwards a white lady asked if I’d ever made any records! I guess I’d made 25 or 30 by that time. I’d been making records since I was eight.

Can you tell us about playing at the famous Ali-Foreman fight, the Rumble In The Jungle, in Zaire in 1974?

I got to know Muhammad Ali pretty well, right after he became Olympic champ [1960, as Cassius Clay]. I’d been to Africa before, but not Kinshasa. Something happened to George Foreman and they had to put off the bout for another day or two, so I couldn’t stay because I had other commitments. But I was there for the recording and taping of the movie part. I don’t know if Ali cared for my music but he certainly knew me. Every time we’d meet he’d say: “Old BB King, you ain’t as dumb as you look!” Even though he’s been sick for years now, he still has a great sense of humour.

You famously call your guitar Lucille. Did you ever discover who stole the original Lucille from the trunk of your car one night in Brooklyn?

We put out bounties for anybody that would bring it back, but nobody ever came forward. Even after I got to be popular, we got to put rewards out. We were offering $15,000 back in the 50s, which was a lot of money. I did give one of my Lucille guitars to Pope John Paul II one time at the Vatican. A lot of people don’t know, but he used to play guitar before he was Pope. He was a very wise man. I’m not Catholic but it felt to me like if I had something I wanted to tell God, I’d tell it to the Pope. Fifteen minutes later, God would know it. He was one of my favourite people. I have another favourite person I hope to meet, maybe this year: Nelson Mandela.

Do you think it’ll happen?

Well, I don’t know if he’s ever heard my name, but I’d like to meet him. He represents certain things for me. He went through a lot, but didn’t seem bitter. I had some bad things happen to me in my life and felt bitter about it for some time. Certain people were always reminding you of what colour you were, that you were the son of a slave. I always felt like I was a second-class citizen. Regardless of what you said or did, it never seemed to be enough. But one of the highlights of my life, maybe four or five years ago, was when I was invited to go back to my home state of Mississippi and go to the capital. I was invited there by the Governor. For about an hour, all the legislators stopped doing their state business so they could talk to me. I tell you what, it was so touching I cried. I think that’s the highlight of my career. I finally became a citizen, rather than a second-class one. In the US today we have a black president, which I never thought would happen in my lifetime. I’m just so glad I lived this long.