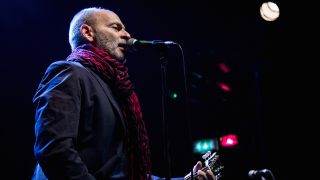 Immortalised in the 1978 song by The Clash (‘White Man In Hammersmith Palais’), the storied West London venue would’ve been the perfect setting for a Joe Strummer tribute had it not been demolished three years ago to make way for a student halls of residence. But that’s progress, kids! Even so, Camden’s premiere live music venue KOKO hosted a slew of punk and new wave gigs back in the day. The Clash played here numerous times when it was still called The Music Machine, and it’s a suitably epic surrounding for the multimedia event in store for the legions of Strummer lovers gathered tonight: the premier of the film ‘I Need A Dodge! Joe Strummer On The Run’.

The first thing worth noting is that the late Clash frontman was a rare and special oddity in the world of punk. Part Bob Marley, part Woody Guthrie, he was educated and enlightened in ways that marked him out from his contemporaries, which goes some way as to explaining why he’s still adored by music lovers the world over. The truth is, Joe Strummer transcended punk. He was a rock star, but unlike most rock stars, he stood for something. He taught a generation of alienated youths that “passion is a fashion”, and his message remains just as relevant to the youth of today.

We arrive at the gig as punk all-stars The Crunch warm up the crowds with a blast of four fan favourites from The Clash’s eponymous debut album. Fronted by singer-guitarist Sulo Karlsson (Diamond Dogs), and rounded off by lead guitarist Mick Geggus (Cockney Rejects), bassist Dave Tregunna (Sham 69) and drummer Terry Chimes (The Clash), the super-group joyously bash their way through Janie Jones, Career Opportunities, Garageland, and White Riot, and it’s clear from the get-go everyone here is in for a special night.

Nick Hall’s documentary I Need A Dodge! Joe Strummer On The Run is an exploration of a specific and forgotten period in the musician’s life. It traces his movements through Spain in 1985 after The Clash fell apart and he fled the country to escape the criticism incurred from the British press. A projector screen descends over the stage as Joe Strummer’s old mentor and collaborator Don Letts spins dub reggae remixes of familiar Clash tracks like Guns Of Brixton, Straight To Hell and Radio Clash. But before the screening of Nick Hall’s film, we’re treated to a recital from Redemption Song: The Definitive Biography of Joe Strummer by the book’s author Chris Salewicz, another long-time friend of the late musician.

The chapter Salewicz reads from centres on the same time in Strummer’s life as the action in Nick Hall’s film, and it helps contextualise a period that’s not really been addressed in previous documentaries such as Westway to the World or The Future Is Unwritten (both of which are essential viewing). Anyone who owns a copy of the seminal London Calling by The Clash will be familiar with Strummer’s love of Spanish culture and American cars (check out Spanish Bombs and Brand New Cadillac) but Salewicz’s reading ahead of the film puts the audience in the mind of one of music’s most intriguing figures during his most illusive period. He affects Strummer’s accent when quoting him directly, and his impersonation is spot on. The reading garners devoted laughter from those listening, and the spirit of the late icon can be felt in the room before the opening credits of I Need A Dodge roll.

As far as documentary films go, I Need A Dodge is more of an art film than a conventional music documentary, but the story of Joe Strummer and The Clash has already been sufficiently told in the aforementioned films by Don Letts and Julien Temple. Nick Hall’s film has a more magical, mythical quality rarely seen in music documentaries. Whilst the storyline covers the disintegration of The Clash and Strummer’s work with Spanish bands Radio Futura and 091 in Madrid, at the heart of the film is Strummer’s love affair with Spain and his overwhelming desire to own a Dodge American car. The man depicted here isn’t the political agitator we’ve become familiar with, but rather an explorer with a free spirit, an underlying sense of humility, a sophisticated sense of humour, and a deep love of music. Just when we thought we couldn’t love him anymore…

The other major draw tonight aside from the premiere of I Need A Dodge is the prospect of seeing punk icons like Charlie Harper (UK Subs) and the immortal Wayne Kramer (The MC5) reinterpret a selection of songs by The Clash. Expectations are met, for after the film ends we’re treated to one of the best hours of punk rock karaoke ever. Dressed like a 1920s gangster, Segs from Ruts DC brings an effortlessly cool swagger to Brand New Cadillac and Bankrobber, before sharing an anecdote about the time Joe Strummer and Rat Scabies called him up from LA and invited him over to work on a song with them for the soundtrack to Grosse Point Blank.

Elsewhere, Strummer’s fellow 101-er Tymon Dogg reaffirms his reputation as the king of gypsy punk with fierce renditions of Lose This Skin, and X-Ray Style, originally by Joe Strummer & The Mescaleros – both songs he originally appeared on. Other highlights include David Ruffy from Ruts DC and Martin Chambers from The Pretenders teaming up for some double drum action on Tommy Gun with Charlie Harper on vocal duty, and the guys in The Urban Voodoo Machine take Jimmy Jazz back to a bluesy, swinging New Orleans vibe. Just in case anyone needed reminding, the variety of songs on offer highlight Strummer’s incredible range as a composer and the timeless quality of his songwriting.

The only weak link tonight is Chris Bailey from The Saints. Staggering aimlessly around the stage and reading from a lyric sheet, Bailey looks more like a doddering grandpa in his pyjamas than a punk legend tonight, and he completely fails to do the two most emotionally charged songs in the set (Spanish Bombs and This Is England) justice. Thankfully, the truly legendary Wayne Kramer is on hand to save the day and proves once and for all why he is quite simply the greatest punk guitar player ever. He might be 66 years old, but he storms through Jail Guitar Doors, Looking At You and the utterly timeless Kick Out The Jams like an angry young punk at the peak of his powers. He well and truly “done kicked ‘em out!”

I Need A Dodge! Joe Strummer On The Run will be released on DVD and Blu-ray through Cadiz Music in April.