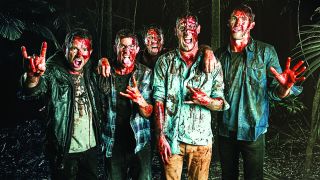 The time is finally upon us, the Metal Hammer cover stars Parkway Drive are about to release new album Ire to take them in new and directions and away from the shackles of ‘metalcore’. The album will be released on 25 September via Epitaph.

As you can probably tell, on Ire frontman Winston is more pissed off than ever. Here’s the story behind three of the more evocative lyrics…

From Crushed: ‘To the left I see the rats and to the right I see the snakes/In my ear they’re whispering sweet sermons of cruel hate’

“That’s aimed at our system of politics. Around the world it seems you have a two-party system, and you’re damned if you do and damned if you don’t. The way to win someone over is by demonising one person, and it’s either bullshit or it’s spitting complete hatred. It’s fucked.”

From Destroyer: ‘Seven trumpets sound their discourse, nine circles of our devise/Messages writ within our columns of fire/No life blooms from the ashes of ire’

“It’s about us destroying the place we live in. The creation we have turned out to be, for better or worse, is not doing wonderful things for the environment that we live in. I wanted it to seem like it was something that conjured up images of end of days, images of nine circles of hell, images that cast heat.”

From Writings On The Wall: ‘They’ll give you all the answers, so you don’t ask any questions/Then they’ll march you with a smile into the ground’

“It’s about how the news is pure drivel, simply for distraction. It’s the idea that people have been told, ‘This is what’s right, you’ve been told what’s going on, don’t question it.’ It’s the illusion of education – in the end, you die just as stupid, but with more information.”

For more incredible stories from the band, including how Rammstein changed their world forever, the truth behind the rage on Ire, what made them switch up their sound so drastically and Winston’s life on the front lines of activism, pick up our new issue right now! You get free stickers and posters and everything!

Or you can download the interactive digital edition for your iPhone and iPad or Android device.